Leg 41 - From Lecce to Martano

Leg 41 - From Lecce to Martano

Starting from Piazza Sant’Oronzo in Lecce, head in the direction of the Castle of Charles V and then arrive to via Merine, the town centre that can be reached after crossing the bridge over the ring road.

From Piazza Santa Maria Assunta, walk towards the Giardini di Athena and, from here, carry straight on towards Acaya, a stunning fortified village dating back to the late Middle Ages, where the original castle still stands. When leaving the centre, passing the church of St. Paul, the walk is characterised by paths dotted with dry stone walls and buildings that lead to Acquarica di Lecce, a town that this route just passes by. From here, you can follow a cycle path to reach the town square of Vernole, in the centre of which stands the column of Sant’Anna. The path continues in a southerly direction along a road that runs between Calimera and Melendugno, surrounded by centuries-old olive trees and Mediterranean maquis, until you reach Masseria San Biagio. The walk continues amid this landscape until you reach the Monastery of the Cistercian Order, where you can admire the church of Santa Maria della Consolazione. After this, you’ll come to the Church of the Madonnella followed by the Martano gates, an important centre of Grecìa Salentina (Salentinian Greece). 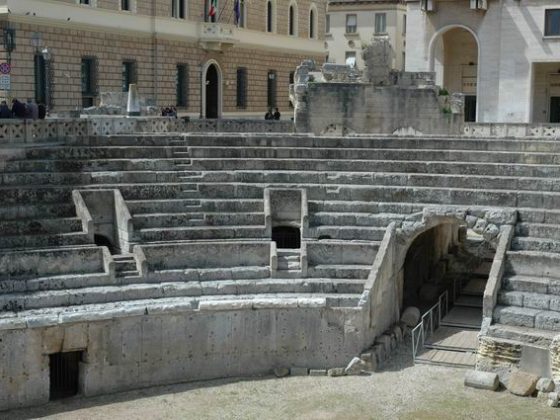