Leg 45 - From Tricase to Leuca

Leg 45 - From Tricase to Leuca

Once you pass the Castle of Caprarica in Tricase, take the dirt track that allows you to cross the provincial road and reach the centre of Tiggiano with its splendid Palazzo Baronale (Baronial Palace).

In this area, the towns are very close together and they follow one another almost seamlessly, meaning that you’ll soon find yourself in Corsano, where it is worthwhile visiting the churches of San Biagio and Santa Sofia. After this, you’ll finally return to open countryside, which is dominated by traditional dry stone walls. Pass the provincial road and, after a series of junctions and a rest area, you’ll enter Gagliano del Capo, with the unmissable church of St. Rocco and the San Francesco di Paola monastery. From here, take the municipal road, which is basically straight except for a few crossroads, and you’ll then cross the countryside to reach the Sanctuary of Leuca, the last point of the Italian peninsula on the Adriatic, known in ancient times as Finibus Terrae. The monument leading onto the square features two angels who watch over pilgrims, representing a journey that is not yet over, but rather has only just begun… the journey to Jerusalem. 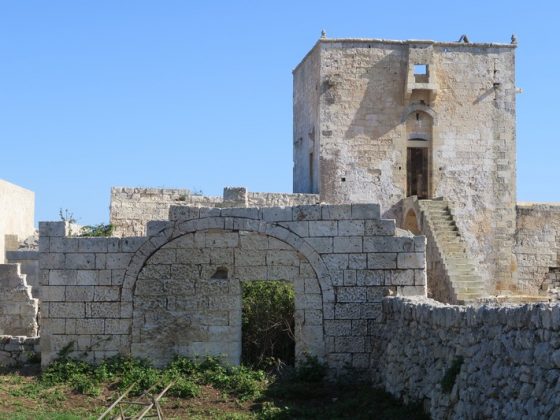