Leg 35 - From Monopoli to Savelletri

Leg 35 - From Monopoli to Savelletri

Starting from the Castle of Charles V in Monopoli, follow the city wall, called the “Lungomare Santa Maria” and its extension, via San Vito. Then turn left for via Papacenere, heading downhill to the left towards the Portavecchia alley and the promenade of the same name.
Follow the coast until you reach a cycle path that turns to the left. Stay parallel with via Tommaso Moro and then with via Procaccia, leaving the town centre of Monopoli.
Carry on along via Procaccia for around 3 km until you reach the intersection with Contrada Santo Stefano, where you’ll first need to turn left to take said road and then right to take Contrada Porto Marzano, going past the Abbey-Castle of St. Stephen, the ancient stronghold of the Knights of Malta and a defence against invasions by Turkish pirates, and the stunning beaches of Santo Stefano and Ghiacciolo.
Follow the Contrada Porto Marzano for 300 m, then turn right onto a dirt road which, after about one kilometre, leads to the sea; once you’ve reached the coast, carry on along the unpaved path that runs alongside the blue of the sea and the wonderful scents of the Mediterranean maquis.
Leaving the unpaved trail and the coast behind, turn right onto a tarmac road, at the end of which you’ll turn right again onto the SP 90. Follow this road for 500 m and then go left at the first crossroads.
Carrying on along this road, you’ll come to a dirt track that you’ll need to follow all the way to the end, keeping left and then right. Once you reach the tarmac road (Contrada Lamandia), turn left and carry on for 400 m until you get to a right-hand turn in order to cross the railway tracks.
Once you’ve crossed the railway line, immediately turn left and continue along the dirt road that leads past orchards and olive groves for 700 m. Then turn right onto Contrada Procopio and, 500 m later, turn left onto the tarmac road called via Putta. Continue along this road for approximately 2.5 km.
Turn left for Contrada Fascianello and then take a right at the crossroads, continuing along the same road. Cross the tracks, carrying straight on along the Lamapecora municipal road until the next crossroads, and then turn right along the unpaved Lamapecora dirt track, passing the Carbonelli B&B until the intersection with the SP 163. Here, turn left and then immediately right, taking the Contrada Egnazia.
Stay on Contrada Egnazia for 1.6 km and turn right for the Egnatia municipal road. Keep left at the next junction to take via degli Scavi and then carry straight on along the Egnatia municipal road for 1.8 km, passing the famous Borgo Egnatia resort, until the left-hand turn for Contrada Masciola.
After 800 m, you’ll enter the town centre of Savelletri via Pisani and will then turn right onto via della Scogliera until you can see the small harbour, passing via Nazario Sauro and its extension, via del Porto, which also represents the end of this leg of the journey. 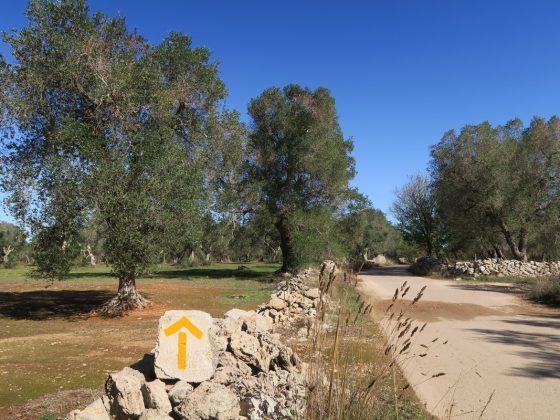