Day 97 – From Celle San Vito to Troia: when the walk becomes really…grape

Today was the 97th stage on the Road to Rome 2021, but the first stage wholly in Puglia. The stage was relatively short but full of surprises, starting from the moment when, at breakfast, Fabiola appeared ready to walk with us to San Severo, where she lives and where she founded ‘Enopolio Daunio’. Her project aims to promote the exquisite wines of the Dauina area, its scenery and the welcome given to the pilgrims: her enthusiasm for the Via Francigena is contagious! At the start of the stage shortly after Celle San Vito there was a big climb, so our engines (our legs!) were soon warmed up. After that, we started on a long descent leaving the mountain behind us. We could see Troia straight away, and on the way there we stopped for an unexpected refreshment. Lucio and Annamaria from the Lions Club of Lucera welcomed us with biscuits, water and coffee which were very welcome! With the much smaller group compared to yesterday, we continued along the descent and from there we could see the landscape open up, with a wonderful view of spectacular hills in front of us. The way was mostly unpaved all the way to Troia, surrounded by fields of wheat and marvellous scenery. Two negative aspects: there’s almost no shade, and places to get water were very scarce. This situation was manageable for us since we were walking in October, but I fear that the walk would be very hard in this area in summer. The signage was also almost non-existent, which is something that needs to be worked on to allow people to discover this marvellous area. After several kilometres on the dirt track, we were accompanied by the Tratturi Regi group and their horses Lupin and Strappo. We made a slight detour, because there was a surprise waiting for us at Pirro winemakers: a lovely tasting of their organic wines, starting off with the Nero di Troia. In fact, we had the opportunity to try four different wines…though we had some kilometres to walk after that, so you can imagine how our legs, and our heads, felt!

We then got to Troia, where we met up with Michele Del Giudice, a name famous in this area because several years ago he walked, alone, from Mont Saint Michel in France to Monte Sant’Angelo, and on another occasion from Monte Sant’Angelo to Jerusalem, where, as you can imagine, there aren’t guides, routes or signs. He walked, inventing his own Via Francigena, all the way to Jerusalem! In the next few days his presence will be fundamental to get to know this territory that is so beautiful and diverse. In his company we visited the Cathedral in Troia with its beautiful rose window. We couldn’t not try the Passionata, a typical dessert made with ricotta – really delicious!

A University professor explained to us that there were several different Francigena ways and not one unique Way, so the current path is a sort of modern interpretation identifying a unique line, though it does have its detours. In fact, in Troia there is a fork that branches the path off into two different ways: one goes to Monte Sant’Angelo and the other goes towards Bari.

The Road to Rome will also travel on both paths: tomorrow I will continue on foot towards Monte Sant’Angelo, while another group of colleagues and pilgrims will continue towards Bari by bicycle. With them there will be a pilgrim and exceptional cyclist: Vittorio Brumotti, trailbike champion. This evening we say goodbye to Frank Damiano, our ambassador and Neapolitan Indiana Jones on social networks, and we will welcome Mattia Fiorentini from Forli and our EAVF colleague Luca Faravelli.

… and last but not least: trying Passionata, a typical dessert

Horses Lupin and Strappo with their jockeys 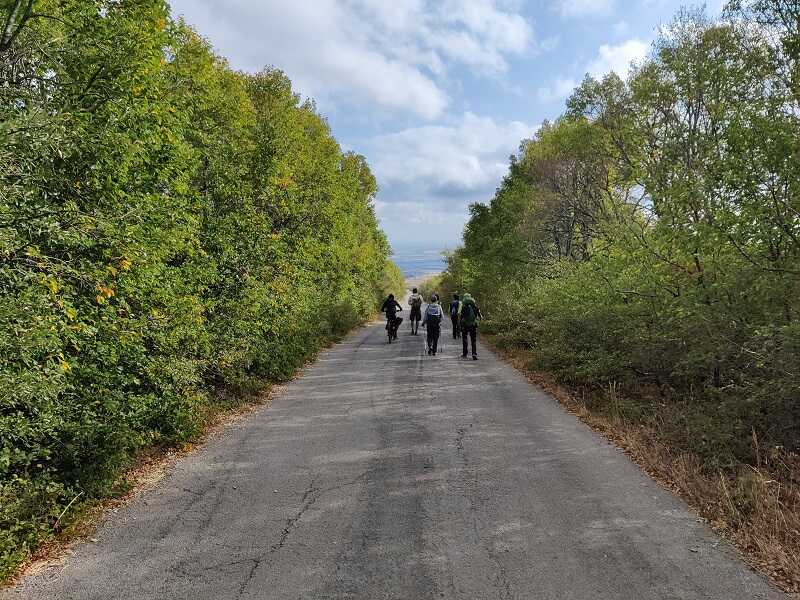 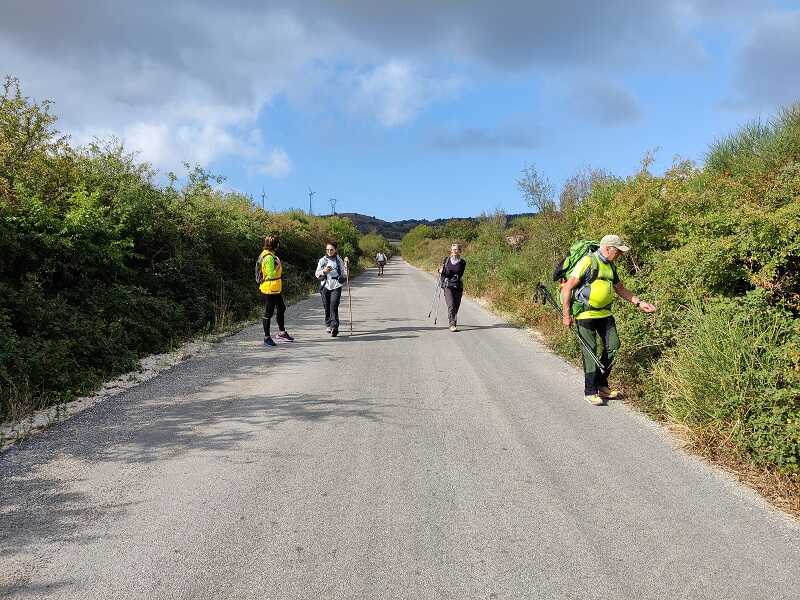 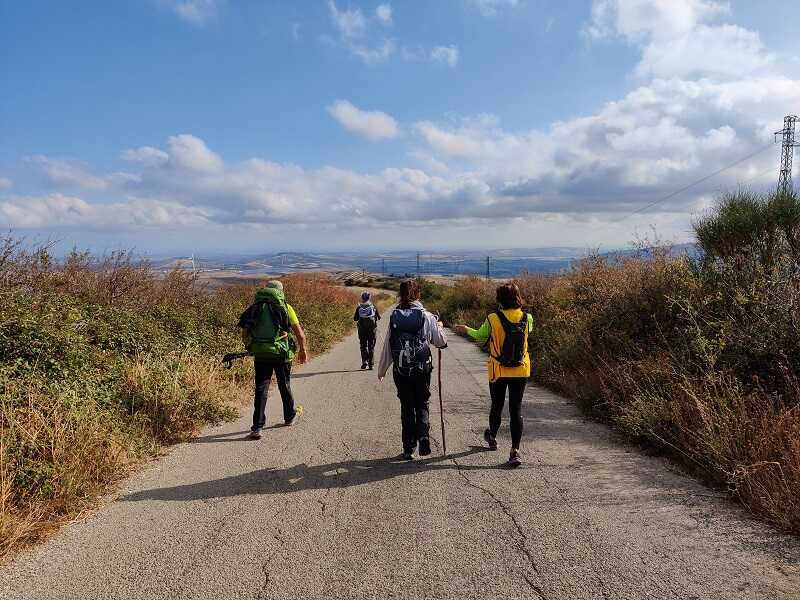 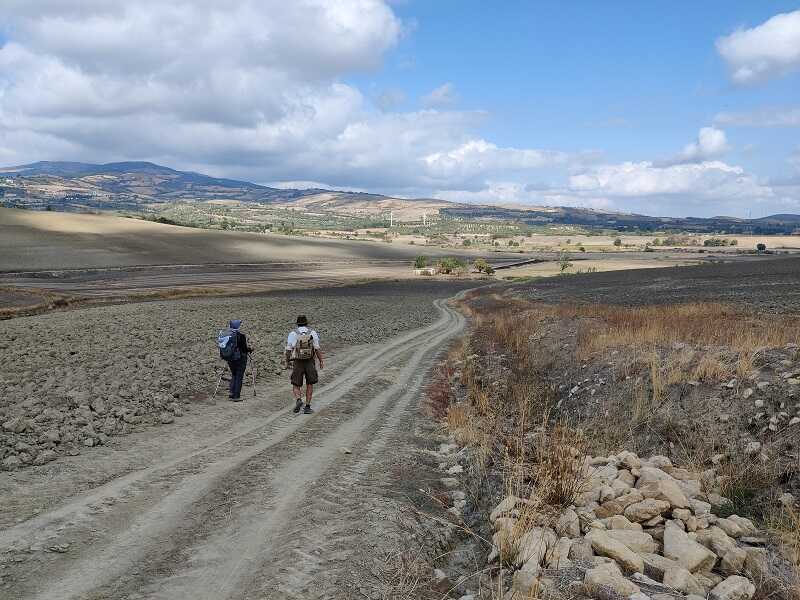 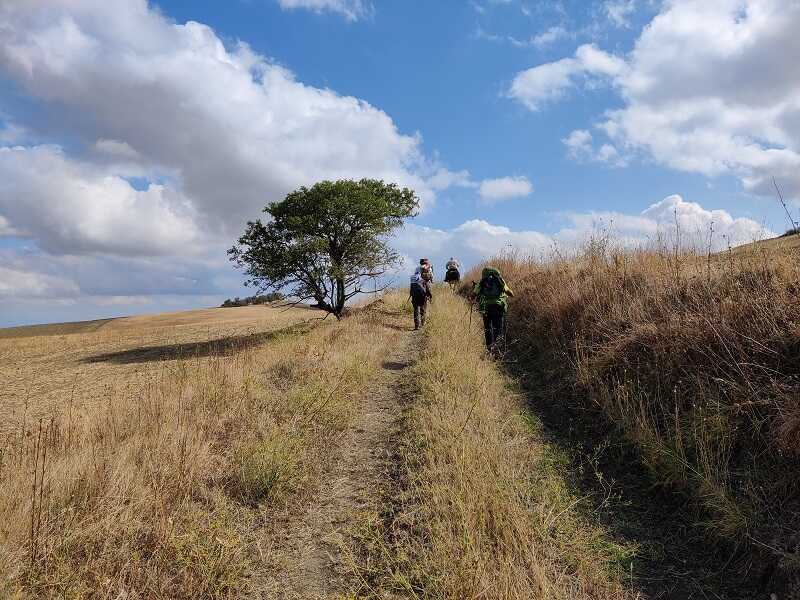 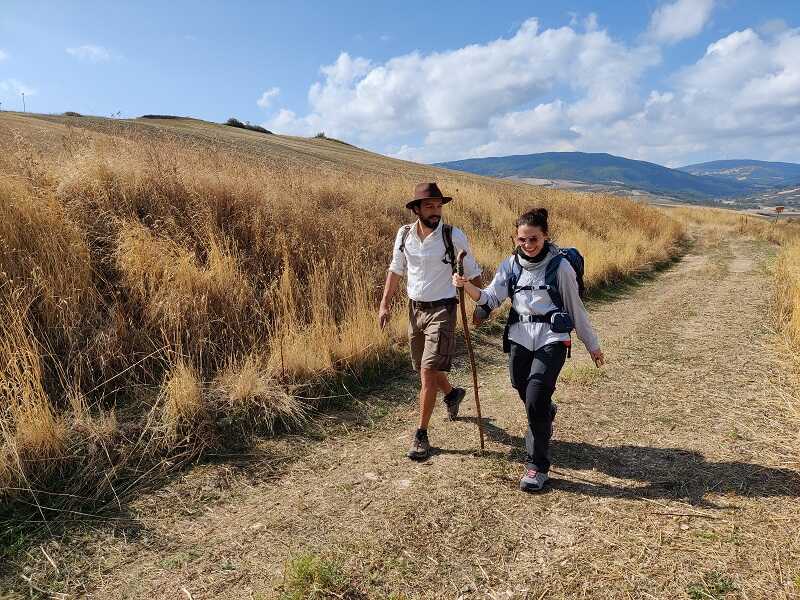 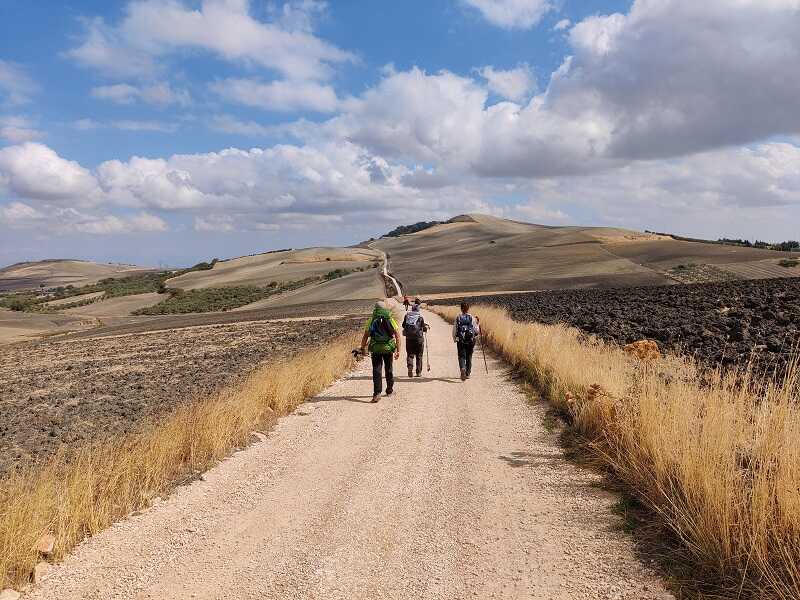 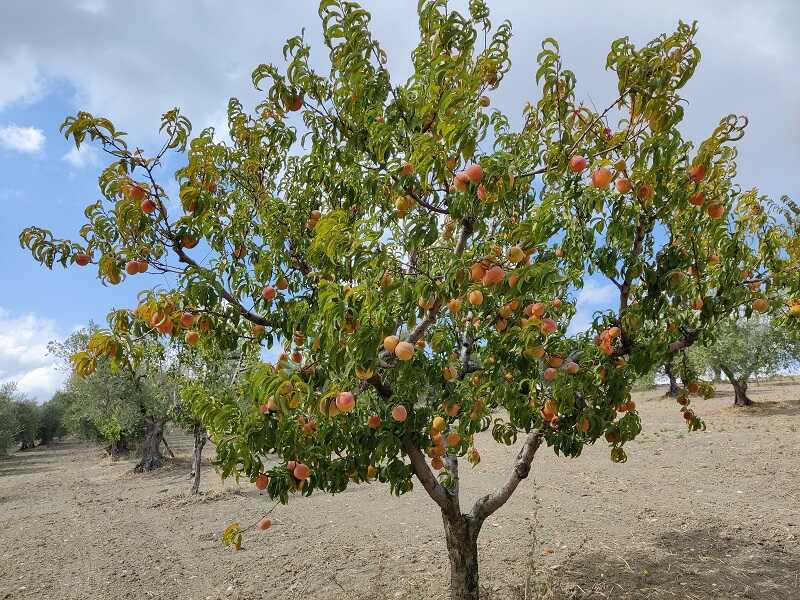 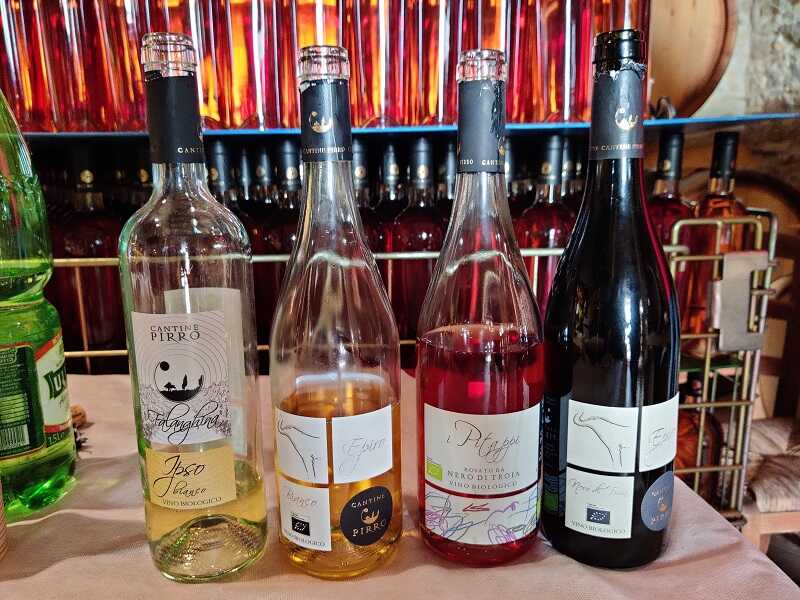 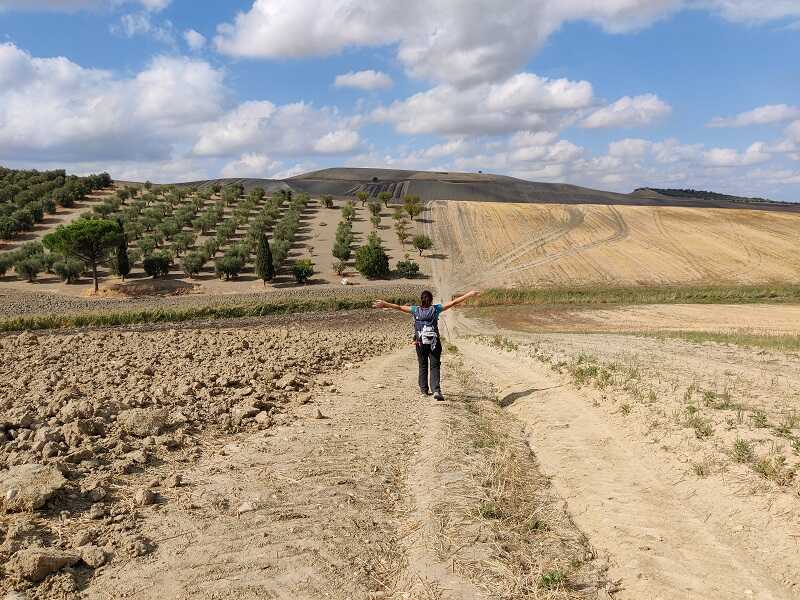 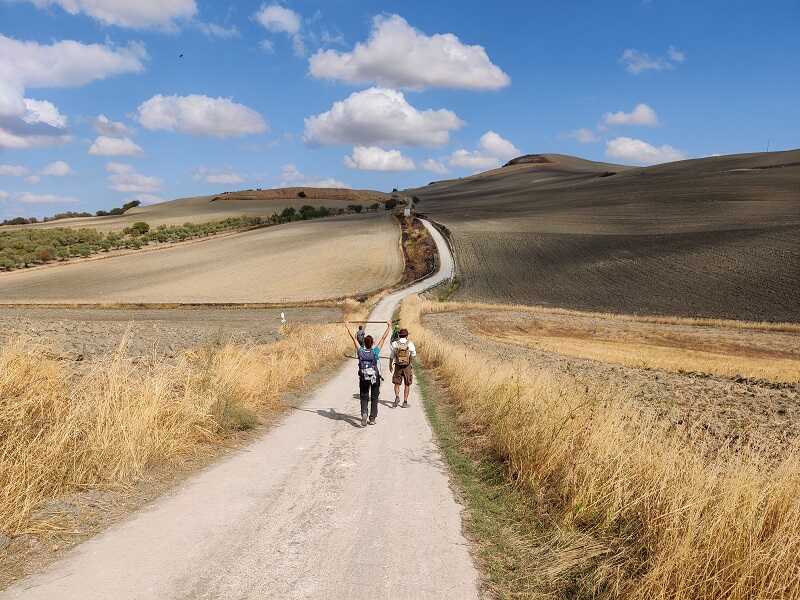 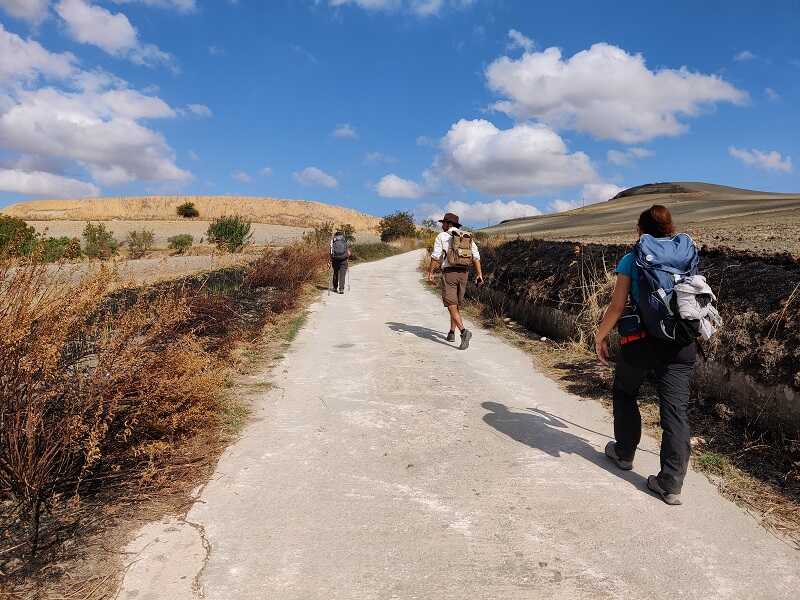 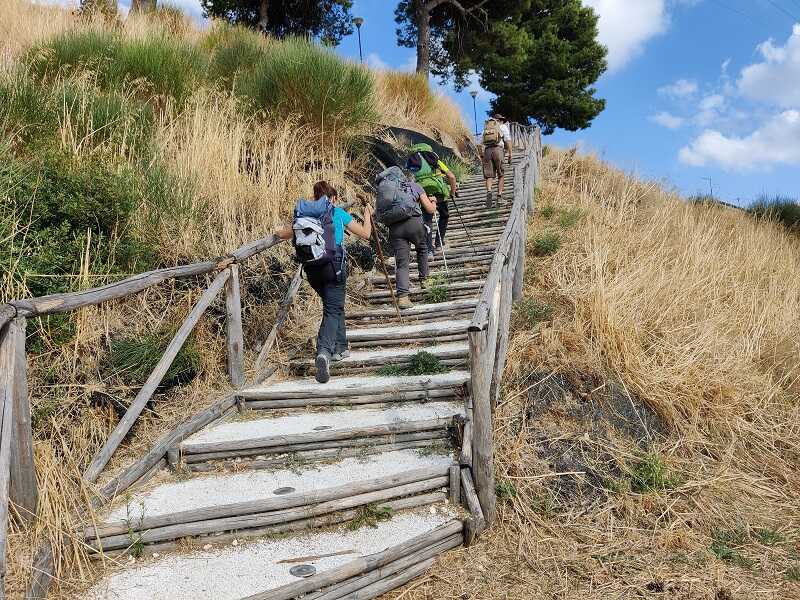 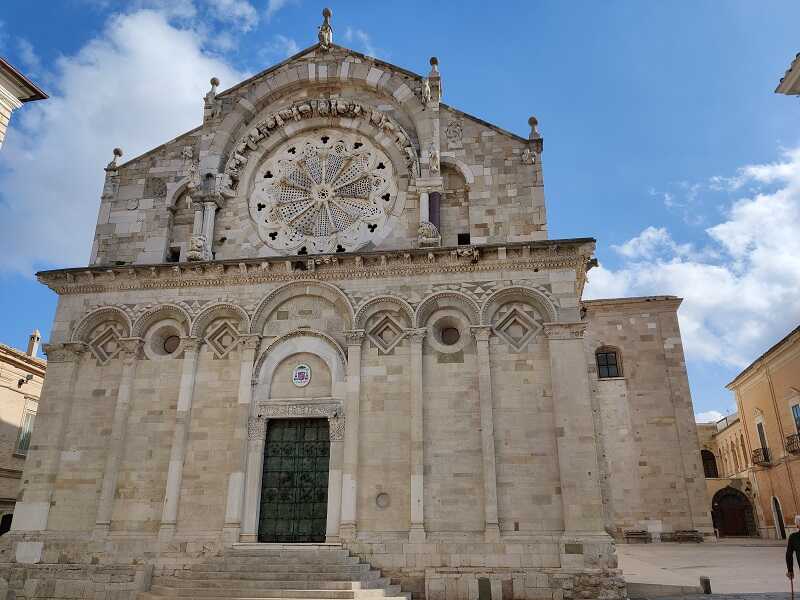 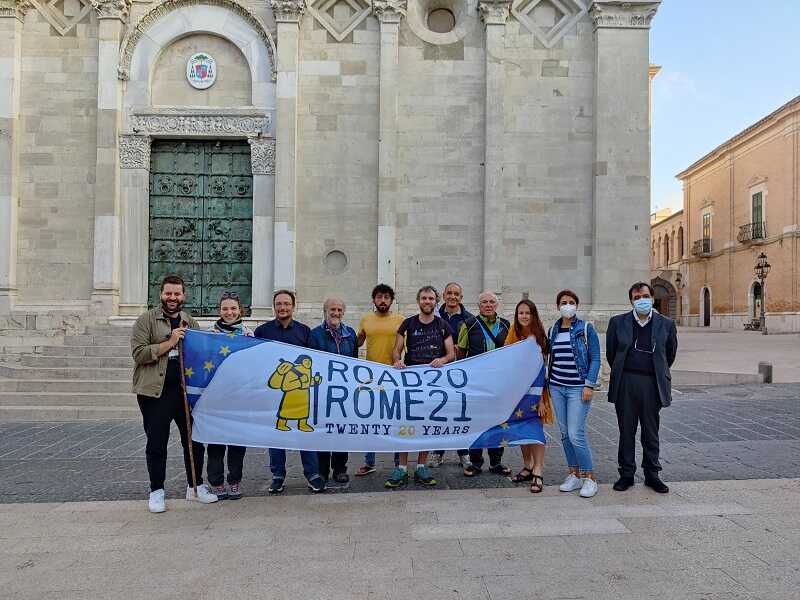 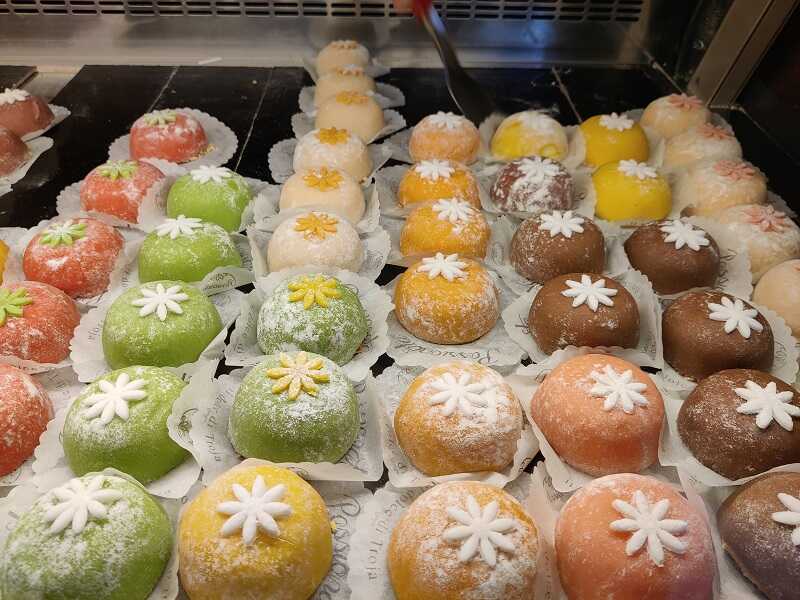