Day 96 – Buonalbergo to Celle San Vito: an authentic taste of the south after one stage…on the moon

Today was a memorable day in our great adventure along the Via Francigena because we arrived in Puglia, the final region to be crossed in our walk. It was quite a long stretch, 29 km from Buonalbergo (in Campania) to Celle San Vito (in Puglia), and with us there were several different associations: the trekking group from Proloco di Ariano Iripino, the Zompafossi and Proloco NuovaMente. We started off with quite a steep climb, and after that the stage played out to be a true relay, with groups of people joining us along the different stretches organised by the various municipalities. At the end of the day there truly were a lot of us! One particularly interesting part was in Bolle della Malvizza in the Appenines in Campania, an area which I really didn’t know anything about. In this area there are bubbles of sulphureous water which come out of the ground in the middle of the grain fields – quite a particular place which reminded us of Mars! There we met up with Gaetano Fioravanti, a member of Montecalvo Irpino Municipality, who is closely following the promotion of the Via Francigena; he welcomed us with some really tasty local bread – it is said that people from nearby travel to the area just to buy the bread!

The stage continued with lots of climbs and very little shade, so the rest-areas created by the local associations were very welcomed, and the solar panels proved useful in allowing us to charge our phones. A sustainable way of making use of the sun!

Further on we reached the rest-area in Trefontane, where we were warmly welcomed by representatives of Greci, Montevalvo Irpino, Castelfranco and Ariano Irpino Municipalities. The Pacific Farm offered us a wonderful lunch comprising of ricotta, mozzarella and caciocavallo cheeses, prepared freshly for us and the 30 people travelling with us. It was a wonderful shared moment to say goodbye to the Campania region. After lunch, before the border of the two regions, we stopped at San Vito Church, where we were given a huge welcome by the communities of Faeto and Celle San Vito, both of which are in Puglia.

At that point, we carried on and entered into Puglia, while the group that accompanied us in Campania stopped at Trecampane; as well as the mayors, the Director general of the Puglia region welcomed us and performed a short open-air Mass. At that point, the whole group, more-or-less 50 of us, carried on towards Celle San Vito. There is lots of wind in this area, and therefore there are numerous wind turbines – in fact, there is the largest wind farm in Italy! From the Church of San Vito, it was downhill: above our heads two aeroplanes, carrying water from a nearby lake, were flying to keep the flames at bay as unfortunately the land burns before it is cultivated. In Celle San Vito the welcome was outstanding: the mayor was joking about governing the smallest Municipality in Italy – in fact Celle has only 149 inhabitants, who all made us feel at home. The dinner was wonderful, comprising both of delicious food and musical moments, making us feel right in the heart of the South of Italy with its happiness and unmistakable spirit! 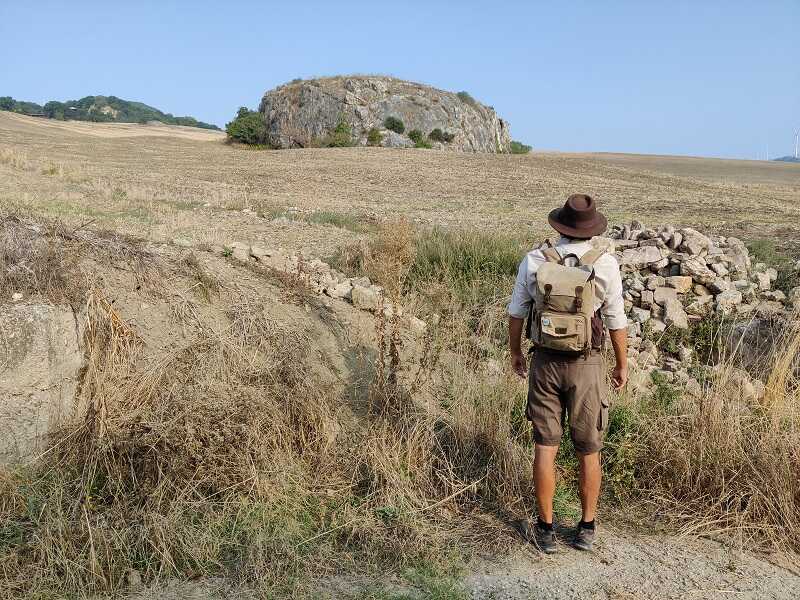 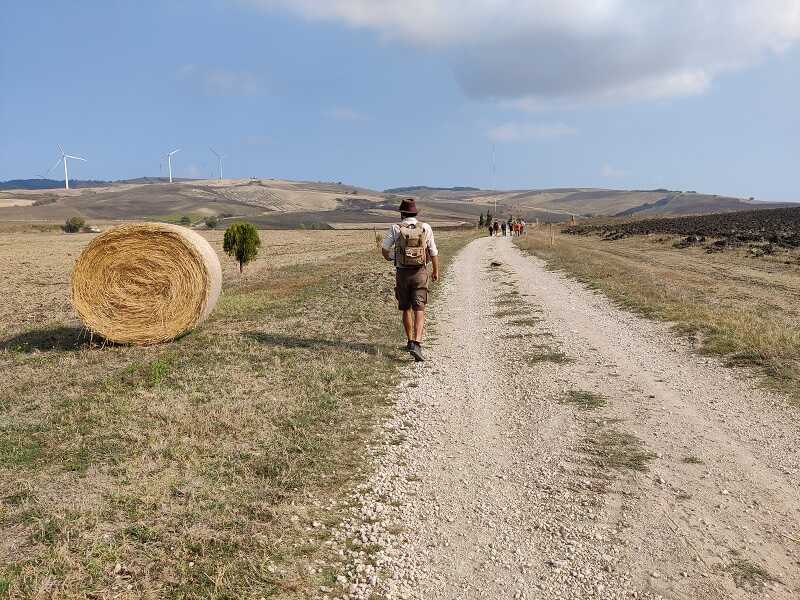 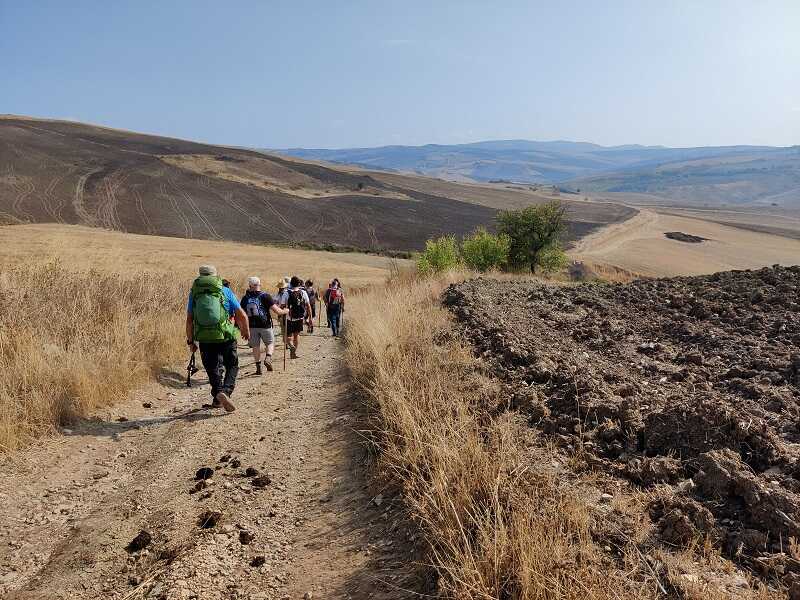 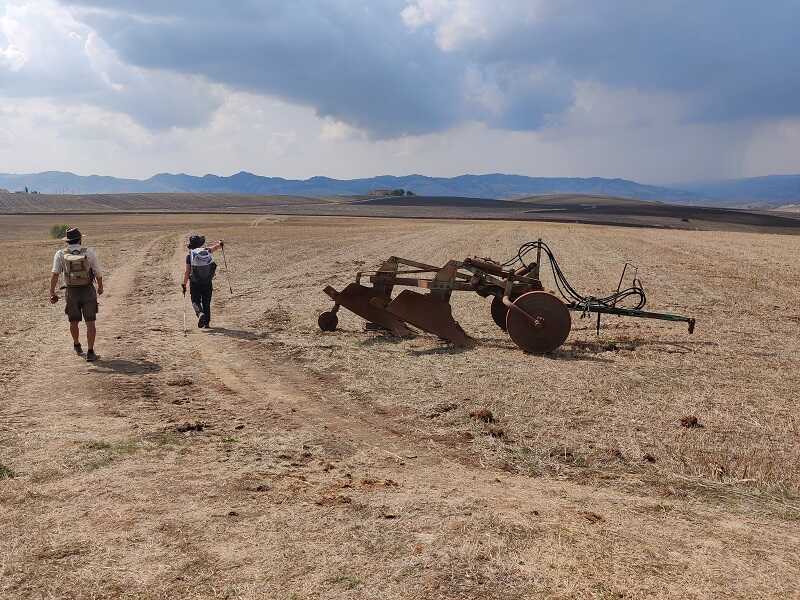 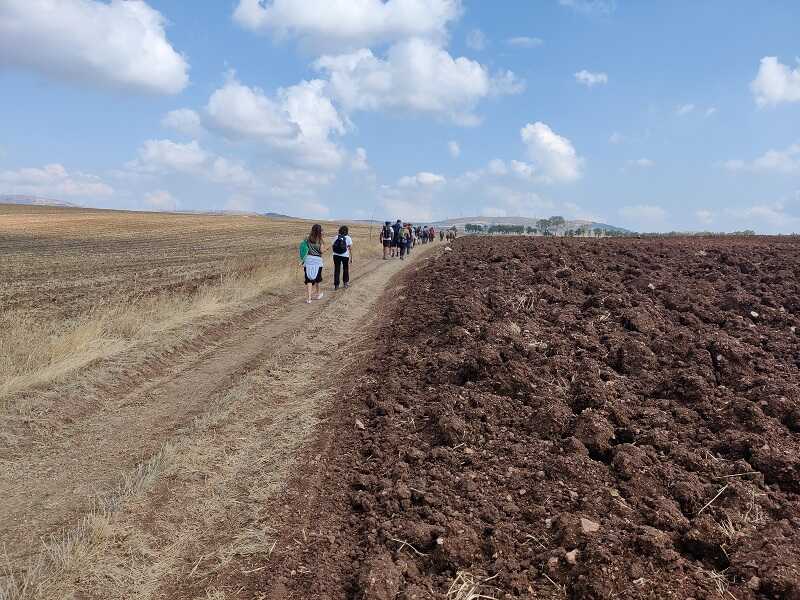 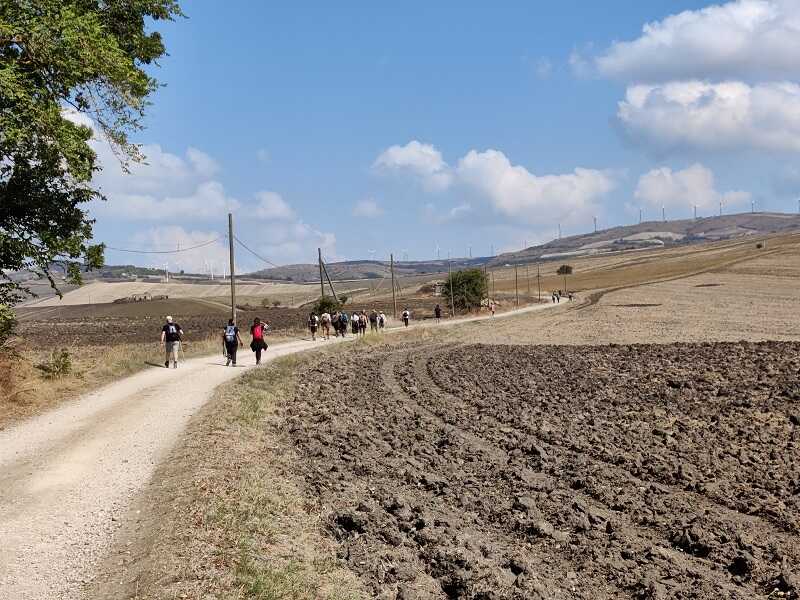 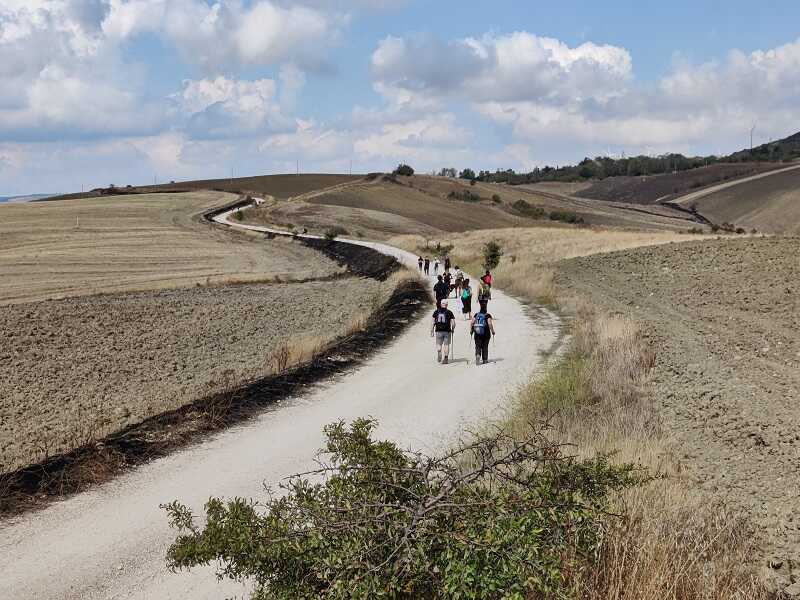 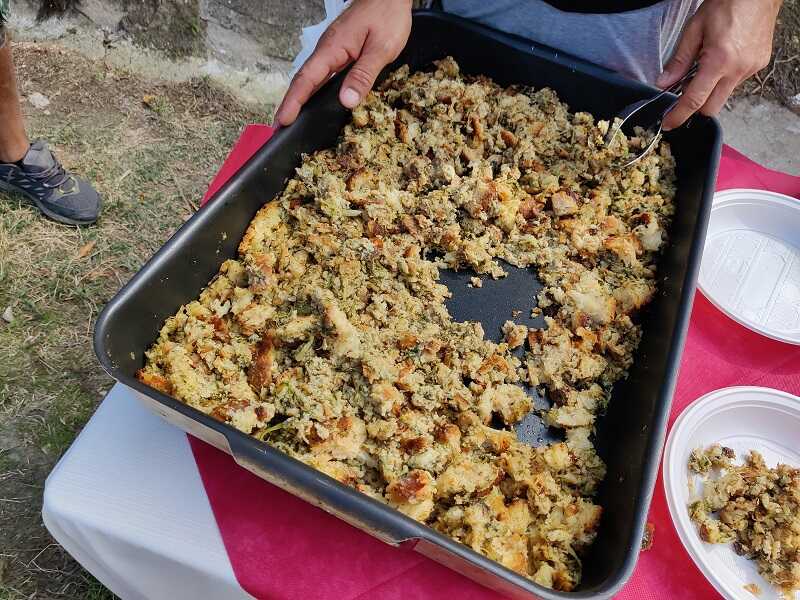 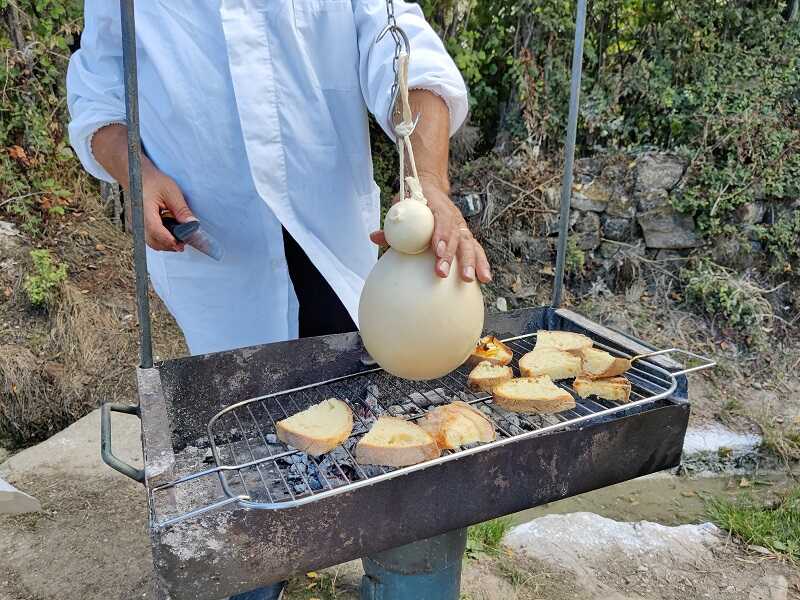 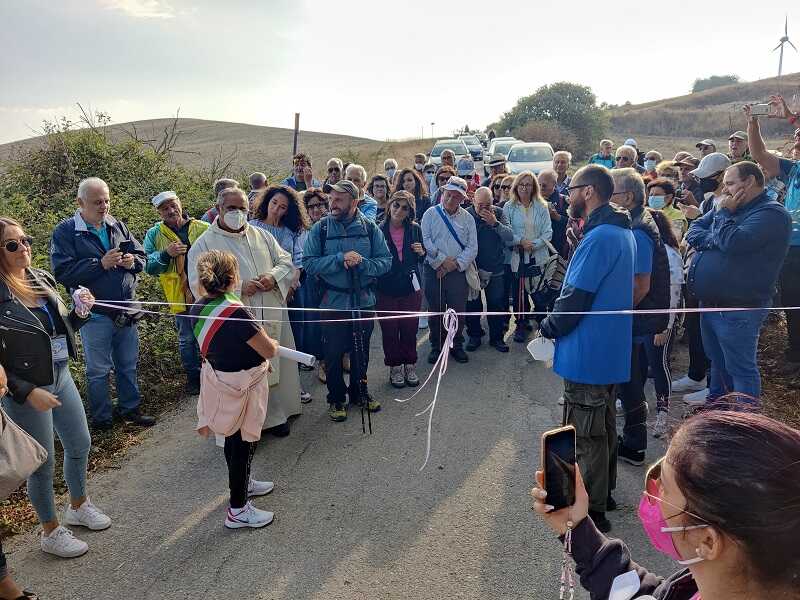 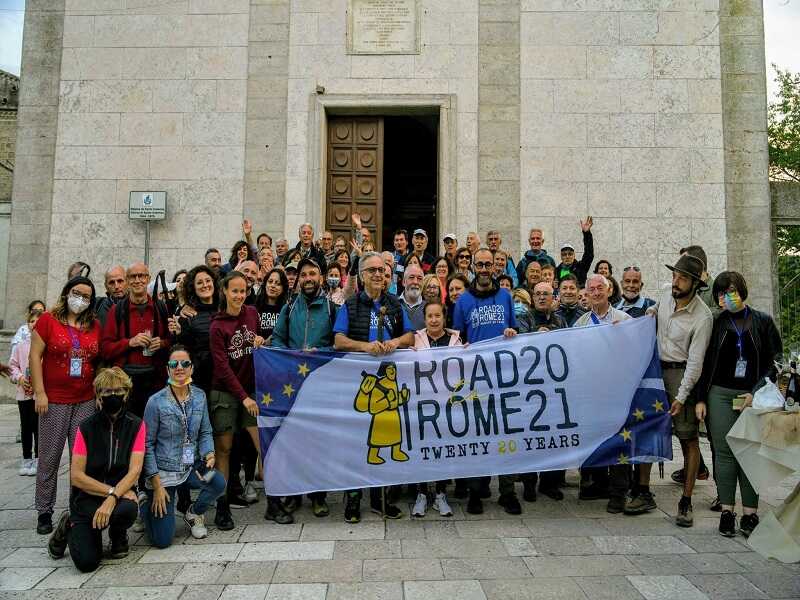 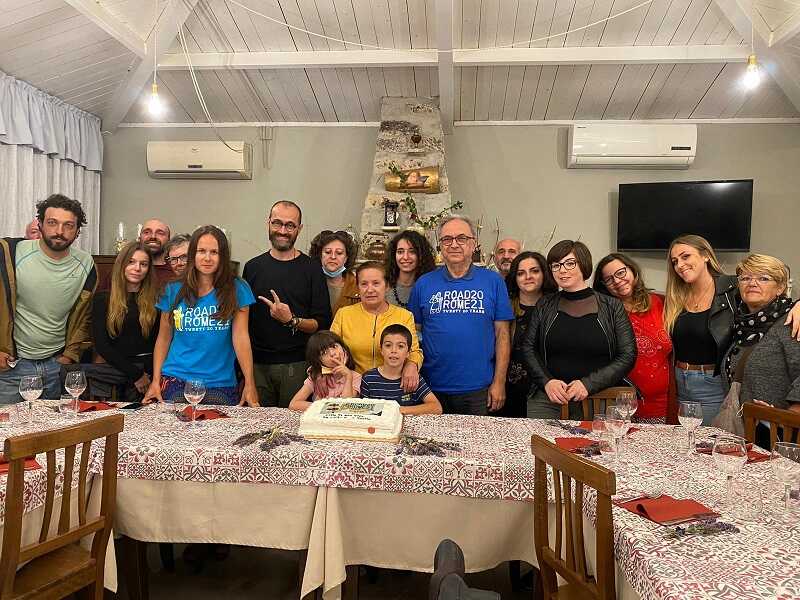