Day 86 – Terracina to Fondi: between mountains and sea with very special meetings

It was already very hot and humid when we set off from our meeting point, because of yesterday’s heavy rain and because we’re so close to the sea – we’re not used to this watery, salty air! During the day we reached peaks of 31°C: with this kind of humidity some members of the group didn’t feel very well during today’s journey. I usually can handle heavy humidity, but I must admit I struggled with it this time too. In the first part of the stage, where we had quite some climbs to do, walking was very intense; some people decided to take their car and join us for the second part of the stage, where the terrain is flat – a choice I absolutely understood.

We climbed into the Monti Ausoni and passed close to the Temple of Jupiter, which I was longing my neck for but only vaguely spotted: the Via Francigena does not pass across it but keeps it somewhat hidden. If I had more time, I would have taken a detour to see it. We walked along the stones of the Via Appia Claudia, a mountainous part of the Appia Antica leading to Brindisi. This part of the Appia was built inside the mountains by the Romans, who literally cut them through in order to make the route 2 days shorter. These Romans really knew what they were doing!

We went on walking, with the sea on our right, rocky mountains on our left, and a few more uphill sections, until we found the lake of Fondi right in front of us. What an amazing landscape! From here we started descending and came to the Torre Epitaffio, and ancient tower where a huge group of locals was waiting for us, including representatives of the municipalities of Terracina and Monte San Biagio. Not only was this the occasion for them to welcome the Road to Rome group: the organizers made the best out of this opportunity and had a ceremony to award the best local Moscato wines. 23 different Moscato wines participated in the ceremony, and of course we were offered tastings, both wine tastings and local peasant foods. A nice and fueling break!

We headed on towards Fondi. Unfortunately, the rest of the stage was on tarmac, and it became very very hot. We arrived to the Monastery of San Magno Fondi, which also provides hospitality for pilgrims; we’ve been coming by many abbeys and monasteries these days, but this one is radically different. As soon as you come close, you can feel a particularly relaxed, open, and modern atmosphere. The mayor and vice-mayor of Fondi welcomed us here, together with Don Francesco, the priest who manages the monastery, although it took me a while to realize this, since he was wearing blue jeans, sunglasses, and a black t-shirt. We had a brief institutional meeting with them and then had a tour of the monastery.

This monastery will surely stay impressed in my memory. It has two churches, an upper and a lower one, and is entirely run by volunteers. It really gives you an innovative, modern, young feeling, showing how the Christian church can change and evolve into its 21st century version. The church itself has many modern details, it has a bar, and Don Francesco organizes meetings for parents who lost their children, because of death or because of drug abuse; he told us how he used to be a DJ and have a young extrovert life before becoming a priest, until a friend of his died of drugs overdose, urging him to change his life and dedicate himself to devotion.

I would have enjoyed stopping here overnight, but we continued for few more kilometers to the final destination of today’s stage: Fondi. I knew nothing about Fondi beforehand, and everything was a surprise for me. The city is gorgeous and is rich of sites to discover, such as its castle. Much of the city is pedestrian, giving you a calm, human-sized feeling. And we have some good news: Fondi has already decided to become a member of our Association – the municipality is already in the process of getting the papers in rule!

Tomorrow is a resting day; I will spend the whole day here in Fond, because today I had a stop at the local hospital and received my second dose of Covid vaccination. The rest of the Road to Rome group will take a ferry and go to the island of Ventotene for the day. Altiero Spinello was imprisoned here as a communist during the Second World War; 80 years ago he created the Ventotene Manifesto, which called for a united, peaceful and free Europe, and he is thus considered one of the fathers of the European Union. The Via Francigena, being a European route recognized by the Council of Europe, cannot avoid honoring this event with a daily detour, now that we are here, and with some special institutional meetings arranged on the island.

Crossing the Monti Ausoni and the Via Appia Claudia

The monastery of San Magno of Fondi and interviewing Don Francesco

The relaxing city center of Fondi

Giancarlo Forte (president) and other members of the Gruppo dei Dodici

Members of the Svalvolati Into the Wild club from Terracina

Representatives of the local Legambiente association 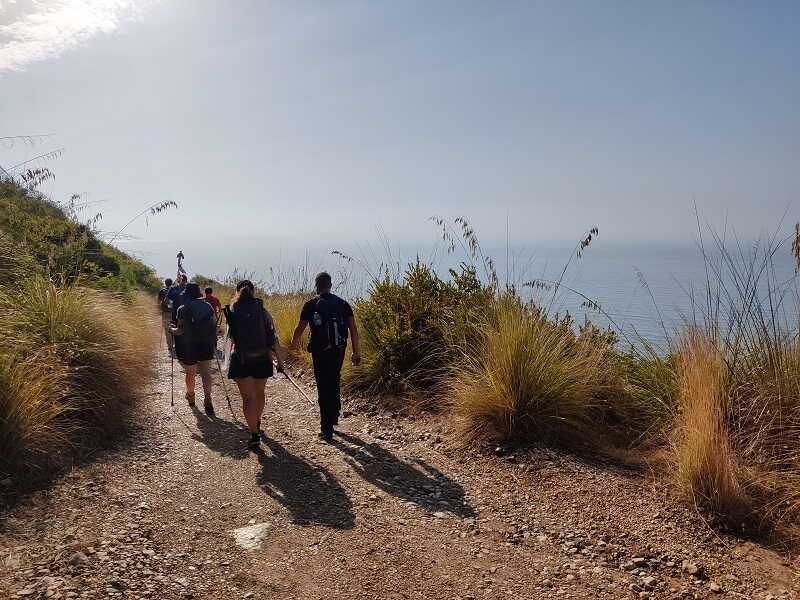 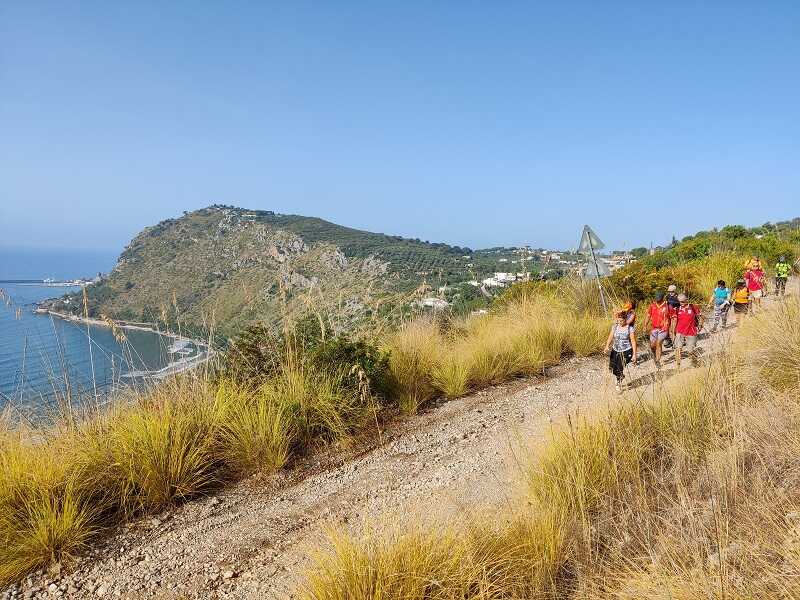 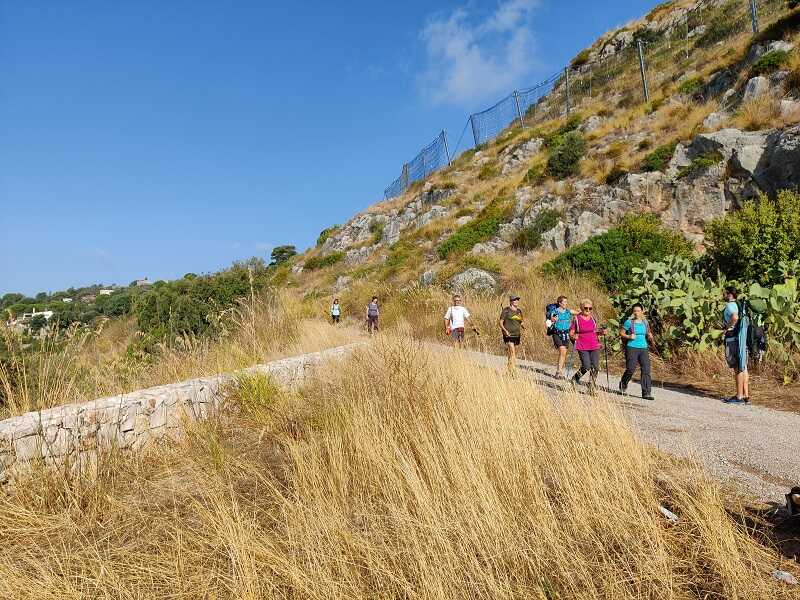 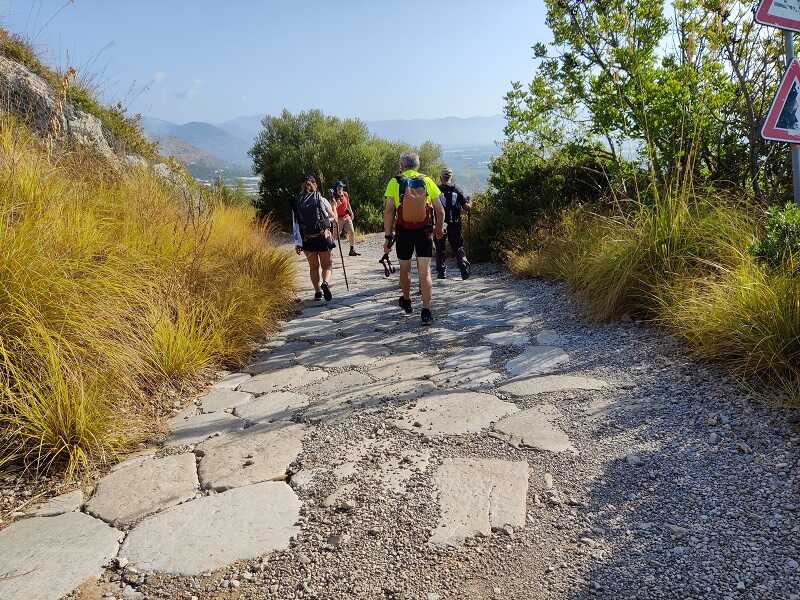 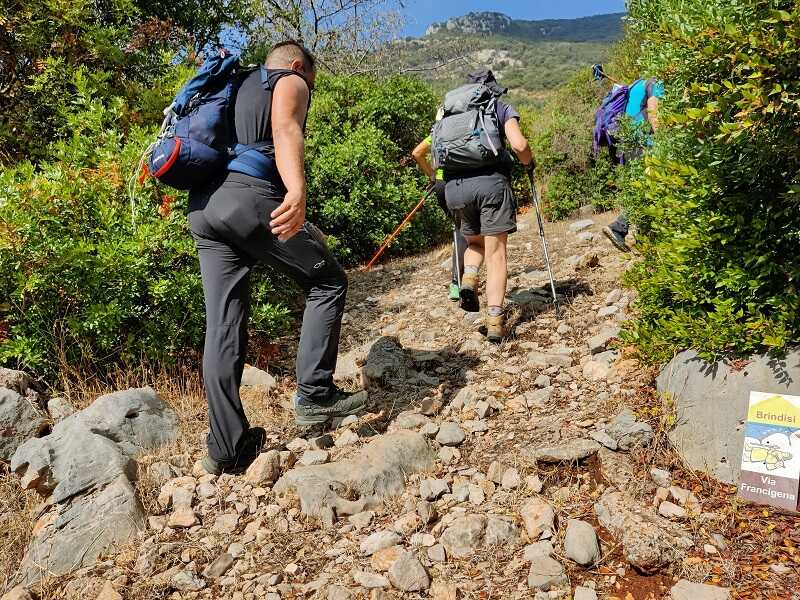 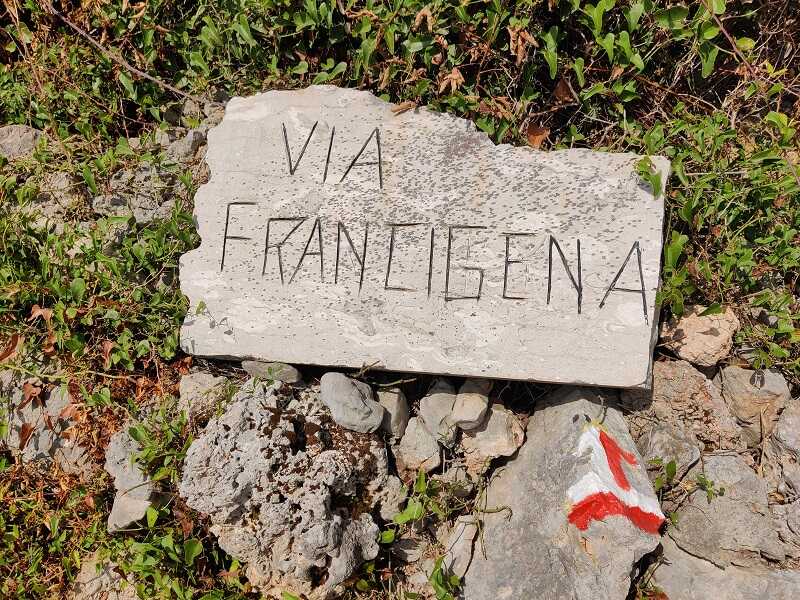 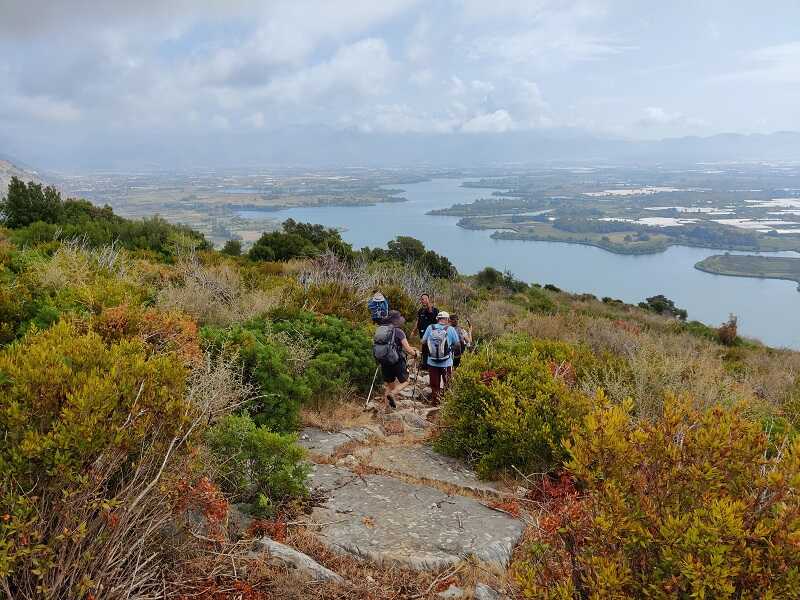 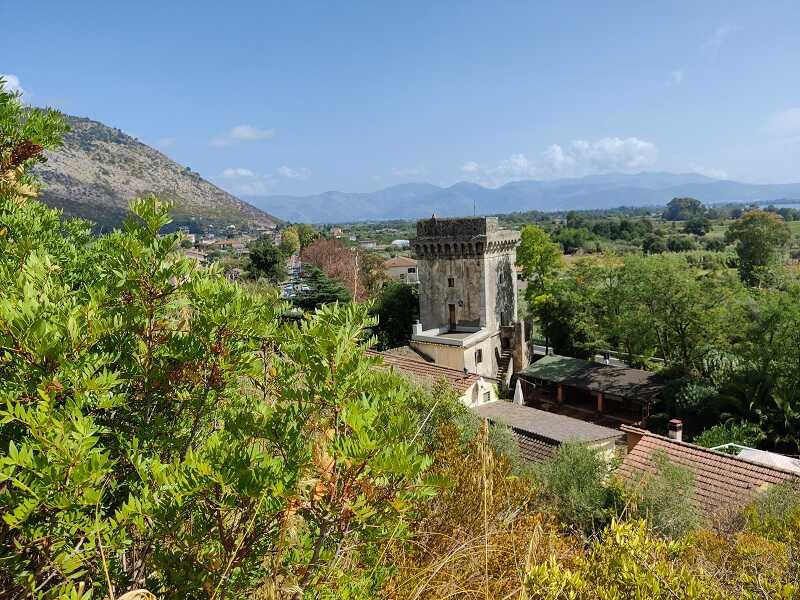 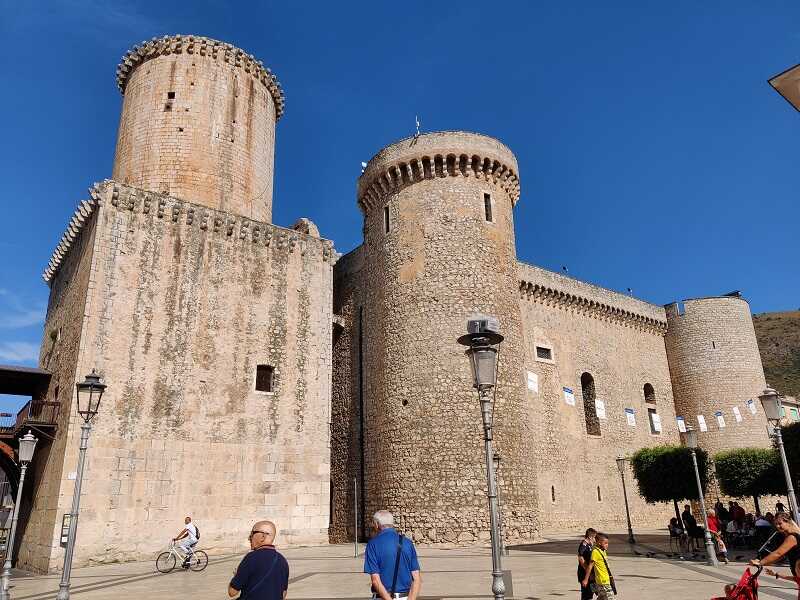 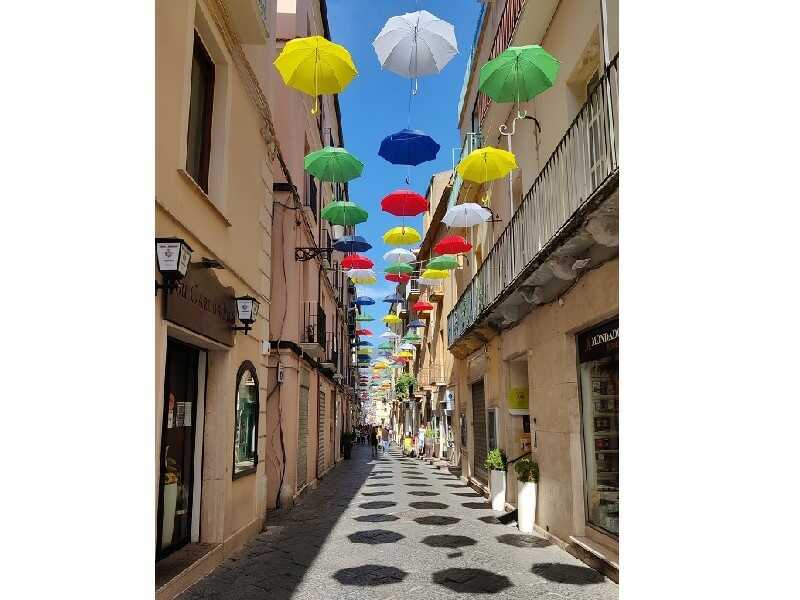 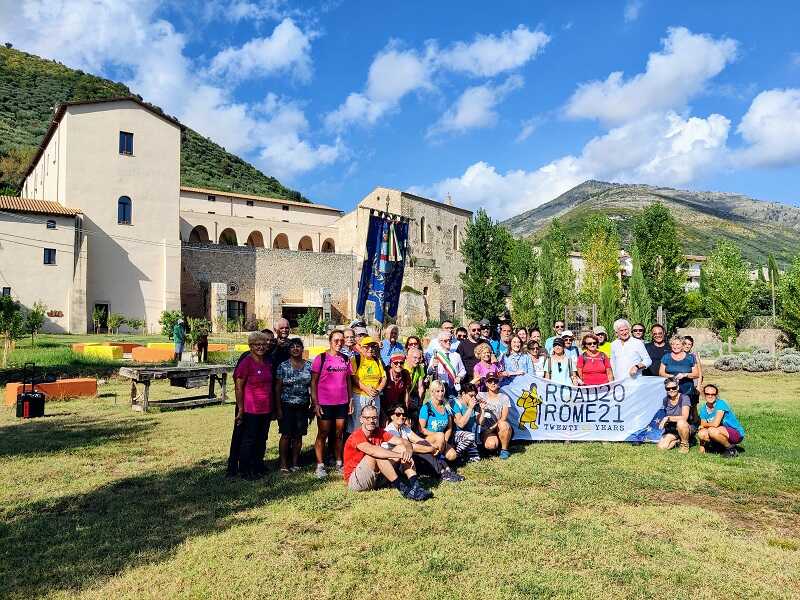