What a big group started walking from Martano this morning: we’re clearly approaching the finish line! We crossed many towns on this stage: Carpignano Salentino, Serrano, Cannole, Palmariggi and Giurdignano. We were joined by Adriano and Salvatore, from the Mollare Mai association, both on wheelchairs and traveling with hand bikes! Their association focuses on promoting road and route accessibility for people with disabilities – especially wheelchairs. I talked a little bit with them about accessibility issues in Apulia and along the Via Francigena in general: there is still a lot of work to be done.
Fabio, from Torcito Bike, also joined us today, representing many associations that cooperated to set up lots of artistic installations for our passage, such as writings, poetry, paintings, frescoes, etc. The route is beautiful and very colorful, and these installations really help to make the Via’s route visible and tangible!
We met quite a few mayors along today’s stage. The first meeting was with the mayor of Carpignano Salentino. He told us about the digital online museum accessible through any smartphone that the municipality has set up, that shows all the heritage sites hidden around this municipality. They decided to do this because many pilgrims don’t stop here, despite there is a lot to discover. This way, they allow them to easily find interesting spots to visit and decide whether and where to take little detours. I’m very happy to see such effort to make heritage sites available and accessible to pilgrims of the Via Francigena!
We then crossed Serrano and continued towards Cannole. We soon noticed that the amount of art installations increased around the town of Cannole – both before and after the center. It was gorgeous and flattering: the amount of time and dedication that has been put in taking care of the Via Francigena here melted my heart. Thank you Cannole and thank you to all the artists who made their work available for us and for the Via! The biggest section of a pilgrim’s route is not in towns and cities but in spaces in between: people stop and rest in these spaces and enjoy the quietness of the countryside. Having benches available and even inspiring artistic decorations is amazing – I loved it!
Our welcome in Cannole was fantastic: local associations joined forces to prepare an incredible buffet for us, the mayor was there to greet us and stamped our credentials. The buffet included traditional delicacies such as a super creamy ‘pasticciotto’ cake – which is one of my favorite local sweets – and ‘friselle’, a poor popular dish with a base of old hardened bread, softened by dipping it in water, and then used to make a sort of bruschetta with a mix of tomatoes, oil, garlic, and other spices. Fabio told me that friselle have been a typical pilgrims’ food across history in this area. If I think about it, it’s true that it would be the perfect snack to offer to pilgrims passing by in any area of Apulia: a special deal, for 2 or 3 euros, for pilgrims who need some extra energies to continue their journey!
We went on walking from Cannole and came across a man sitting on a rainbow-colorful bench who played the accordion for us, a soothing pit-stop before continuing on our way to reach Palmariggi. Here, at the Maria Santissima di Montevergine Sanctuary, the mayor came to meet us – he, too, with a stamp for our credentials.
After Cannole we had a section on tarmac among old and young olive trees, which then led us to the town of Giurdignano, also known as the ‘Megalithic Garden of Italy’ because of the many menhirs and dolmens, which you find all over town, some of which are thousands of years old. We don’t know exactly what they were used for yet; one menhir, for example, has a sort of chapel below it, with frescoes devoted to St. Paul, but many other cannot be connected to similar uses. We visited the Byzantine crypt of San Salvatore, from around 800-900 A.D., containing three altars and many beautiful frescoes. I have to say, I was unexpectedly awestruck by this crypt!
It was late in the afternoon when we arrived in Otranto. After a shower in our accommodation, we went to the stunning castle of Otranto, where we were greeted by the City Councilor before an amazing concert of the group La Cantiga de la Serena: musicians played medieval instruments and sang songs about pilgrims! This was a perfect combination: Otranto is the place where, in year 333 A.D., an anonymous pilgrim came back from the Holy Land. He was a pilgrim from Bordeaux, and from here he travelled back home. The Burdigalense itinerary, based on the witnesses he left behind, is what we now call Southern Via Francigena!
In Otranto many old friends joined us: staff members, many ambassadors, many friend associations…tomorrow we will all walk together as a bigger and bigger group! I’ll tell you all about them in the next blog!

HIGHLIGHTS
– The art installations around Capannole
– The pasticciotto cake that Fabio’s wife had prepared for us
– The fascinating town of Giurdignano, with all its menhirs and dolmens, and the Byzantine crypt of San Salvatore
– The concert in Otranto by La Cantiga de la Serena 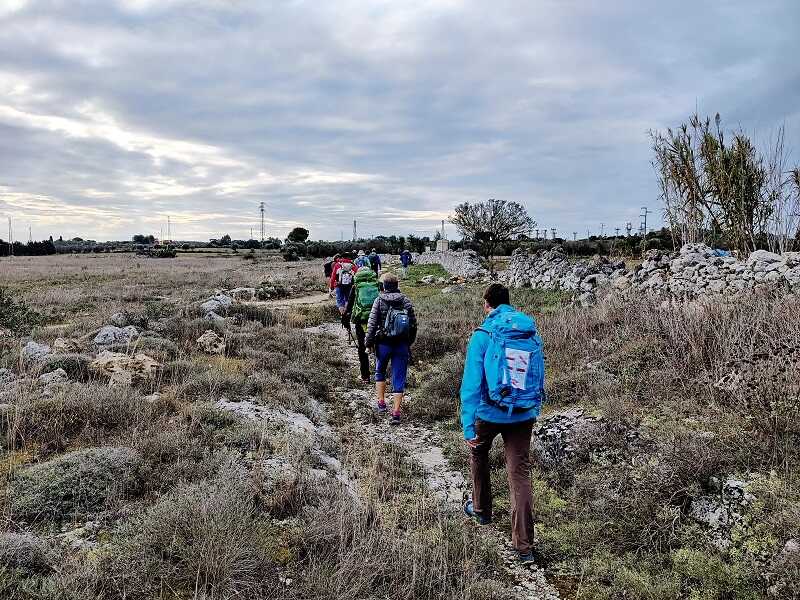 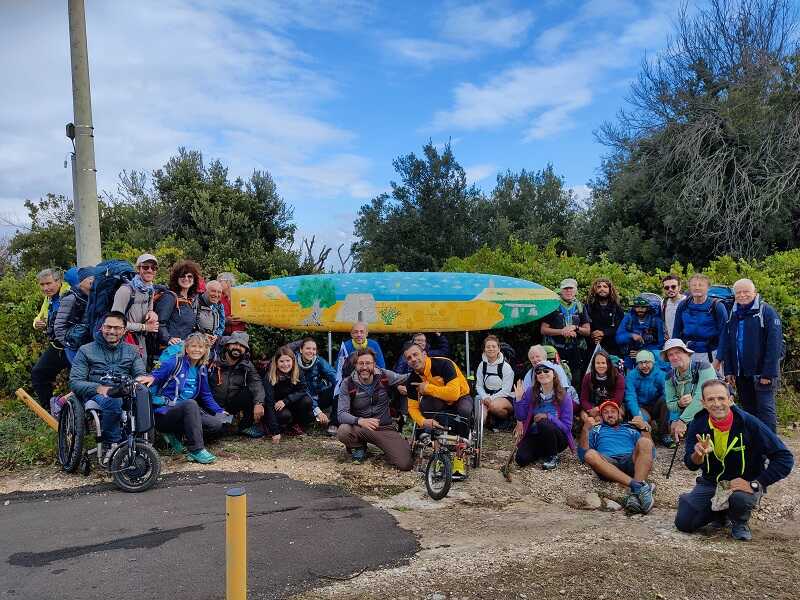 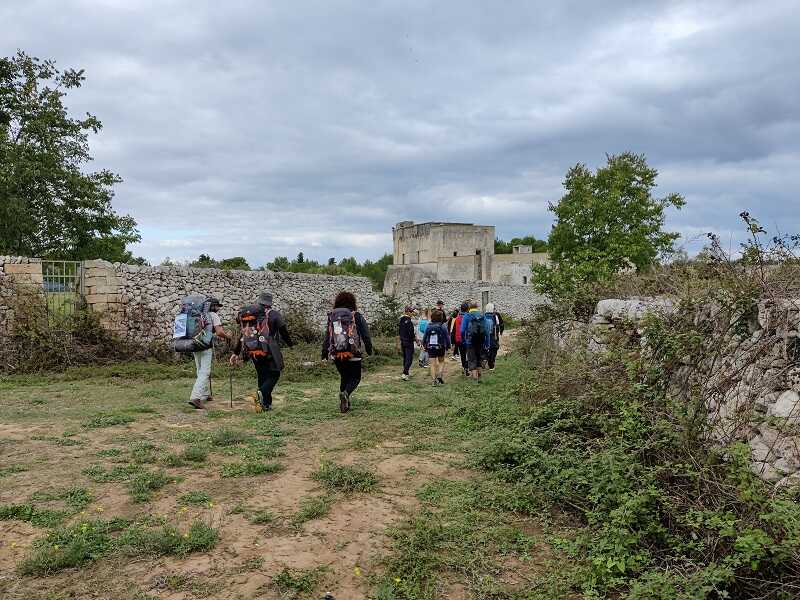 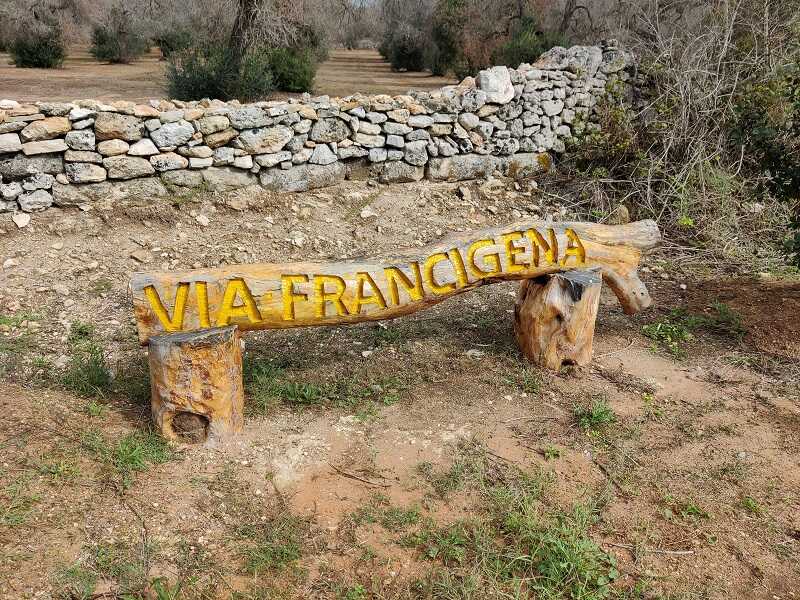 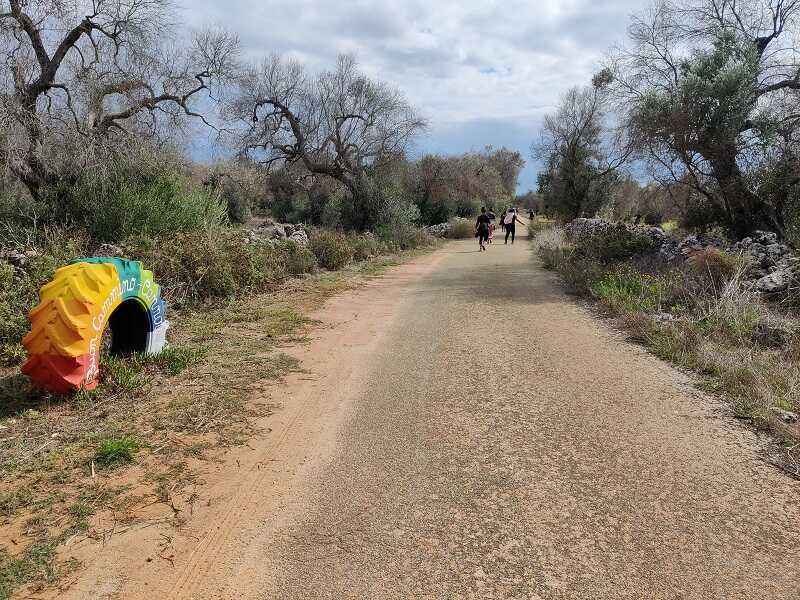 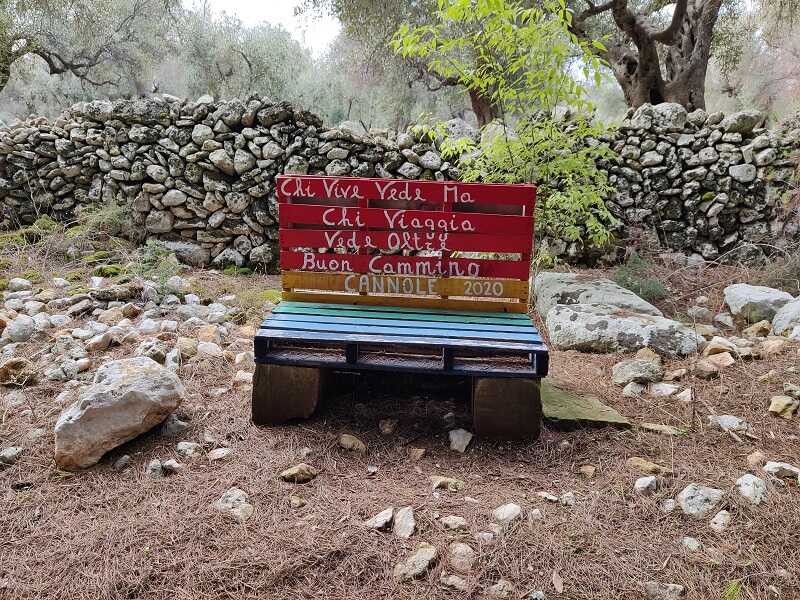 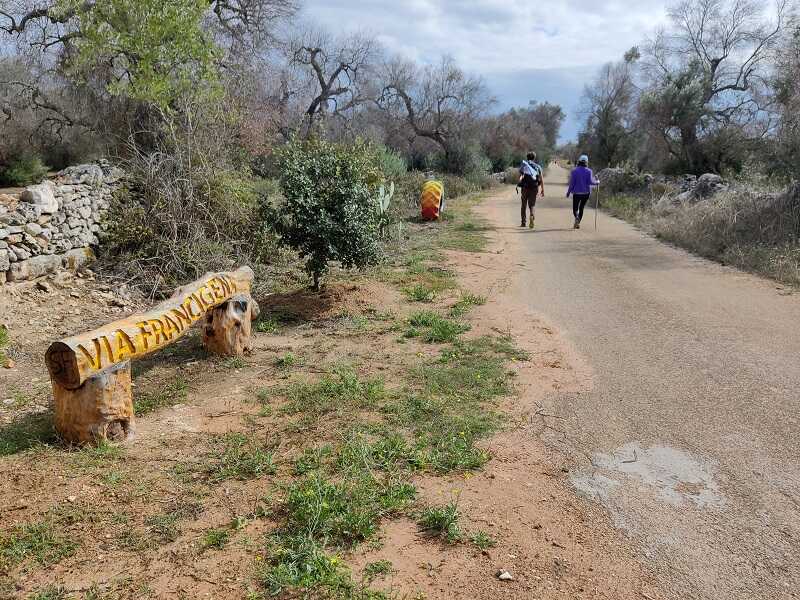 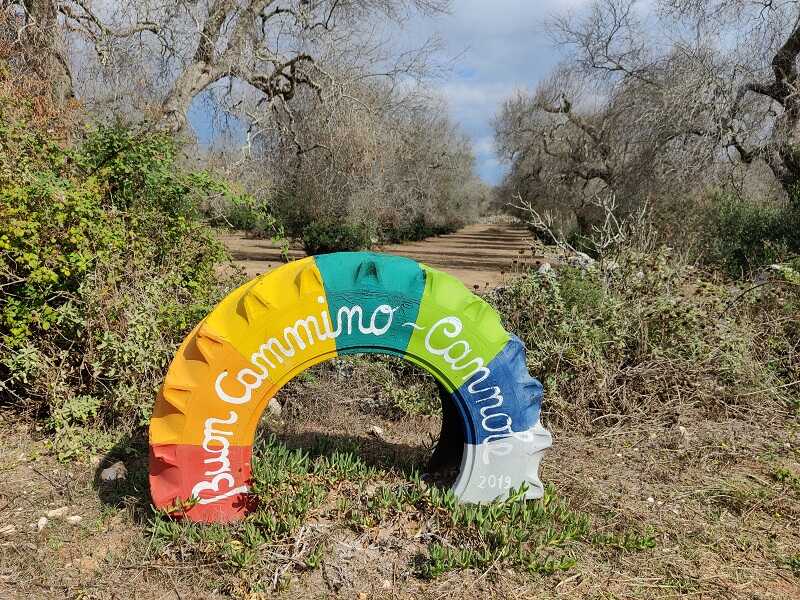 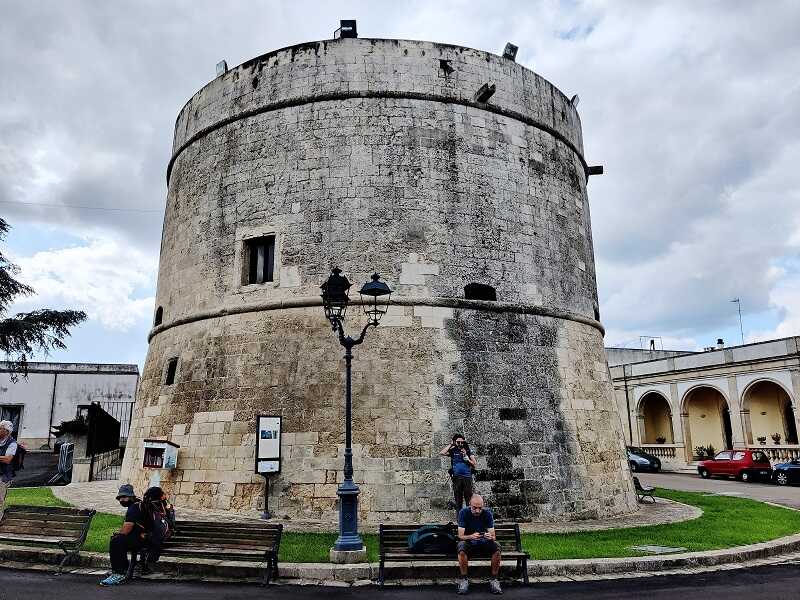 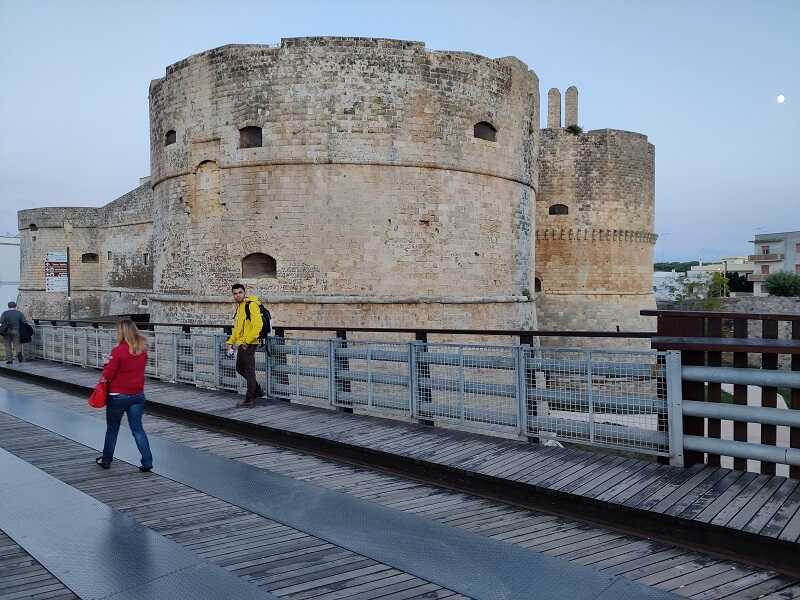 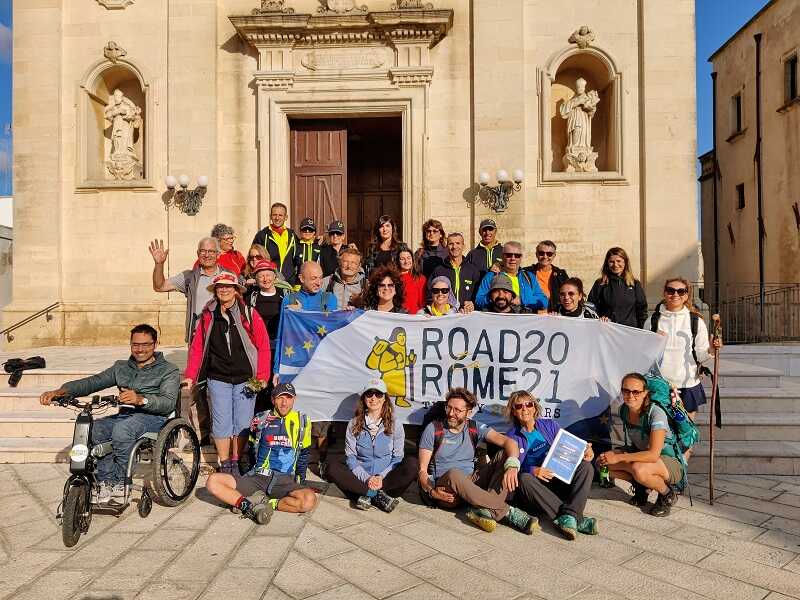 Previous stage
Back to diary