Francigena Romea Marathon in Lazio: the Italian Minister of Tourism Garavaglia walks with us

More than 1,400 people cheerfully invade the Via Francigena and Via Romea path from Acquapendente to Bagnoregio for the Francigena Romea Marathon, with stages of 10, 20 and 42 km.

A virtually summery day, sunny and hot, over 30 degrees. A day of great celebration, which coincided with the anniversary of the Italian Republic. This year, the Francigena Romea Marathon was graced by an illustrious walker and guest, the Italian Minister of Tourism Massimo Garavaglia, who walked the Acquapendente – Bolsena stretch (25 km): an important signal of the Italian government’s closeness to the Via Francigena and slow tourism, a sector that is growing and expanding rapidly with important tourist-economic repercussions on territories. In this post-pandemic phase, there is an even greater desire for the Via Francigena, for open-air and outdoor walks, on foot or by bicycle.

“I didn’t think I would make so little effort to walk 24 km“, commented Minister Garavaglia, “it is so nice to walk in the middle of forests and beautiful landscapes, chatting with so many people and in different languages. It was my first experience and it certainly won’t be my last“.

The Via Francigena Marathon is now ten years old, since the first edition took place in 2013. Right from the start, the formula was chosen to walk 10, 21 or 42 km, a distance that coincides with the length of a proper marathon.

The event has been consolidated year after year, becoming a moment of celebration for the entire area crossed – but also an example to follow, so much so that in the following years two ‘sister’ initiatives were launched: the Francigena Tuscany Marathon and the Via Francigena Marathon Val Susa.

The reasons for the success of the Latium Francigena Marathon are many: first and foremost, there is the great synergy between institutions (Acquapendente, San Lorenzo, Bolsena, Bagnoregio), associations (CAI Viterbo section and local associations) and private operators who work together in harmony. And then there is passion, lots of it. Behind the scenes since the first edition has been a great friend of the Via Francigena and lover of sport, Sergio Pieri, then an official of the Acquapendente municipality. Together with him, many other enthusiasts who have always collaborated in the spirit of sharing the Via Francigena. It is no coincidence that this successful event that brings families, young and old, runners and sportsmen to walk has since spread to other regions, becoming a fixed appointment also included in the calendar of annual initiatives in which the European Association of Via Francigena ways has participated since the first edition.

Minister Garavaglia’s presence was flanked by two other people from the Ministry of Tourism: Palmiero Perconti, advisor for Jubilee events, and Stefano Mantella, head of the PNRR unit. I had the pleasure of sharing this fascinating part of the journey with them and was surprised by the brisk pace of their walk at almost 6 km/h! But who said that the Ministry and the government don’t walk? Not only do they do it, regularly, but they are also well trained! Despite the brisk pace, there was plenty of time to enjoy the breathtaking scenery, to meet people and to thank the municipal administrations of Acquapendente and San Lorenzo, as well as associations who welcomed us with open arms. This is the beautiful spirit of walking.

During and at the end of the stage, there was plenty of time to reflect on the future of the Via Francigena, also in view of the Jubilee 2025, with reference to the services that are increasingly being requested by wayfarers. Minister Garavaglia emphasised, as he has already done on other occasions, that ‘that of the Via Francigena and the walking routes is an authentic tourism made of people and extraordinary excellences capable of promoting the economic rebirth of many areas. It is a form of tourism that is gaining more and more momentum and that from being a niche phenomenon is becoming a true mass trend that can give impetus to the restart of quality tourism‘.

This was an Italian Republic Day celebrated on the Via Francigena, with joy and moments of sharing, rediscovering the time and pleasure of meeting each other. 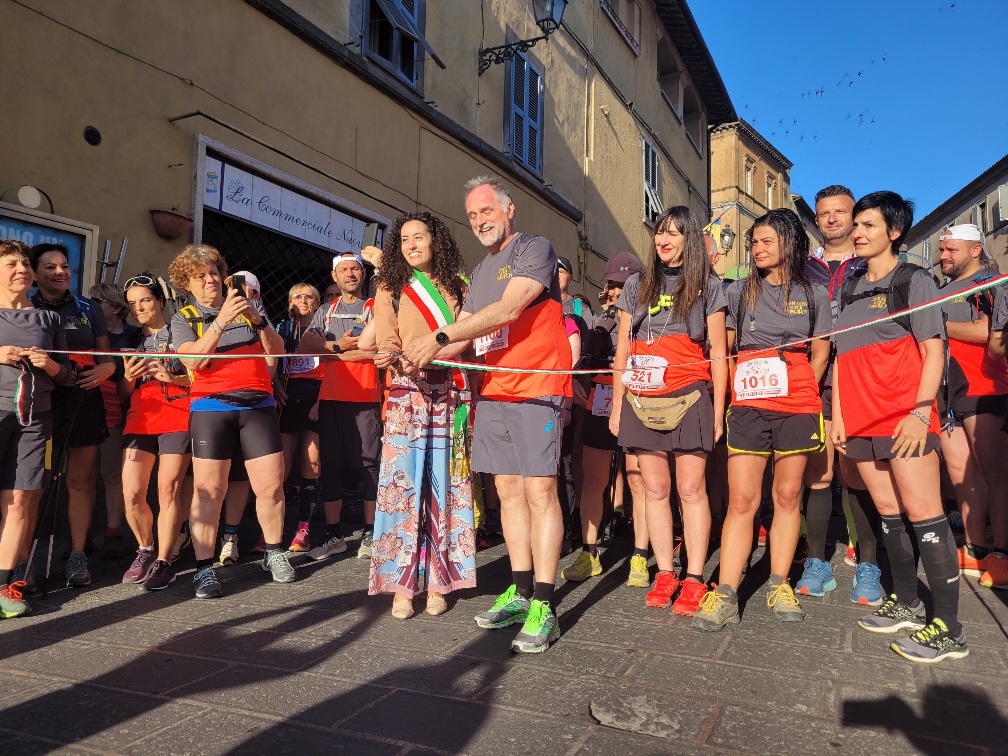 PrevTrenitalia – Via Francigena: partnership renewed for a sustainable experience
Signing of the Memorandum between Via Francigena and the Way of Saints Cyril and MethodiusNext