Day 109 – Torchiarolo to Lecce: nearly blown away by the wind!

Today was very, very, very windy – I sometimes thought I was going to fly away: I had to hold tight on my phone and catch my sunglasses before they escaped from my face. I’m going to say it was the windiest day of Road to Rome so far!
We came across fields of wind turbines, which confirmed that this area is often windy. It makes sense: we are now very exposed to the Mediterranean Sea, and the open sea is ahead of us. Also, there’s a lot of open fields around us, alternated with olive tree fields. I suspect that all these open and empty fields used to be olive tree fields and are now deserted due to the recent dramatic and very aggressive bacterial disease ‘Xylella’, which Italians know well, and which has hit most heavily the Salento area. Indeed, we have been seeing very sick olive trees here, which virtually look like skeletons, as if a fire has killed them. It has been a disaster, especially considering that in Salento most olive trees are centuries – if not millennia – old. The scenery in some areas is almost apocalyptic, and sometimes gives me a really sad feeling. Today, however, we also saw many fields full of new baby olive trees: a very positive sign of hope for the future!
Overall, today’s stage was quite monotonous, and there’s not much to tell you about between our point of departure and of arrival. One exception was our stop, somewhat mid-morning, at the charming Abbey of Santa Maria di Cerrate, which we only looked at from the outside while we had a break from the wind and a snack.
We then continued walking. Olive tree fields in Salento are most often accompanied by little cottages, in Apulian dialect called ‘Pajare’, which are built with a dry-stone masonry technique, using the typical white stones of Apulia. Dry-stone building techniques are very traditional and quite difficult, as they don’t use any sort of glue between stones, such as cement; rather, the stones build strength and stability by balancing and fixing one into the other. In Apulia you can see many low walls built this way, marking the borders of olive tree fields, as well as these little cottages, historically used as shelter for farmers, to cover from summer heat of from thunderstorms, or as storage space. These dry-stone constructions you find in Salento were built at all times across history, up to year 1000 A.D. – and they are still strong!
Before reaching Lecce, we crossed the small village of Surbo, where we were able to organize a last-minute meeting with the mayor; he was very happy and excited to learn about our association and our projects, and hopefully will soon be one of us! I had my second ‘panino’ here (the first one was during the first break – today I’m particularly hungry!), and then started walking again.
Of course, by now we’ve learned that coming into big cities means walking across suburban areas which are not so beautiful and have a lot of traffic. This was predictable, so I didn’t mind that much. Pretty soon we arrived in the beautiful, baroque center of Lecce, capital city of Salento, beloved by people from all over Italy!
We took a group picture in front of the Cathedral just as the bishop was coming by; he curiously asked who we were and what our journey was. He then invited us to visit the Episcopal Palace next to the Cathedral – an unexpected surprise! The city councilor also joined us, so we had to take another group picture all together. In the evening we had some meetings with local administrations and associations, brainstorming on slow traveling and on the development of the Via Francigena in Salento. Even the students at a local school participated and gave us their input!
This evening we ate in a pub: no pasta, no traditional Italian food; instead, a burger, fries and a beer, for a highly appreciated change. I honestly loved it!

HIGHLIGHTS
– Seeing newborn olive trees planted to replace the sick and dead trees hit by Xylella
– The amazing city center of Lecce
– Dinner with a burger and fries, for a radical change! 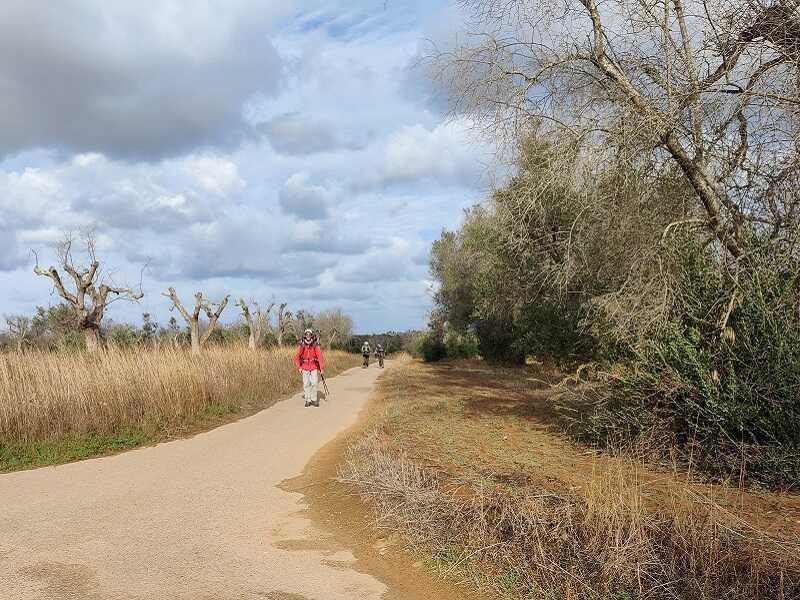 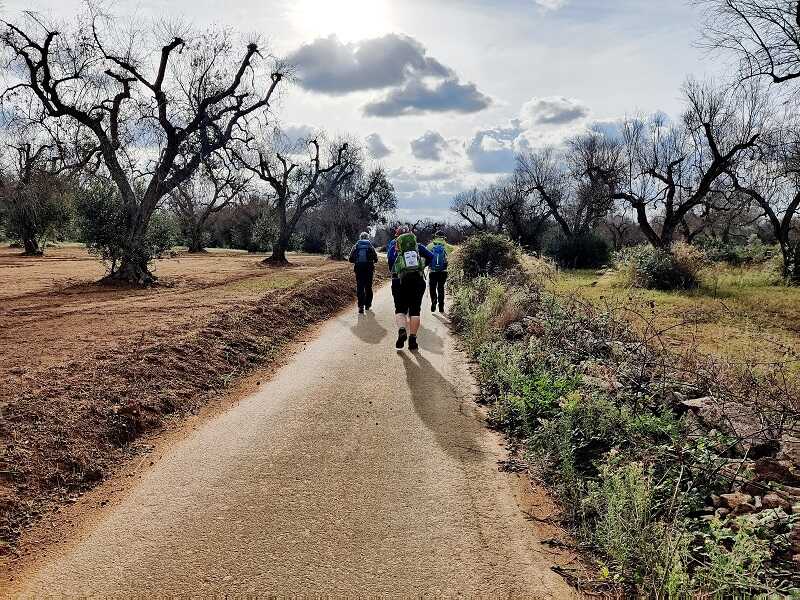 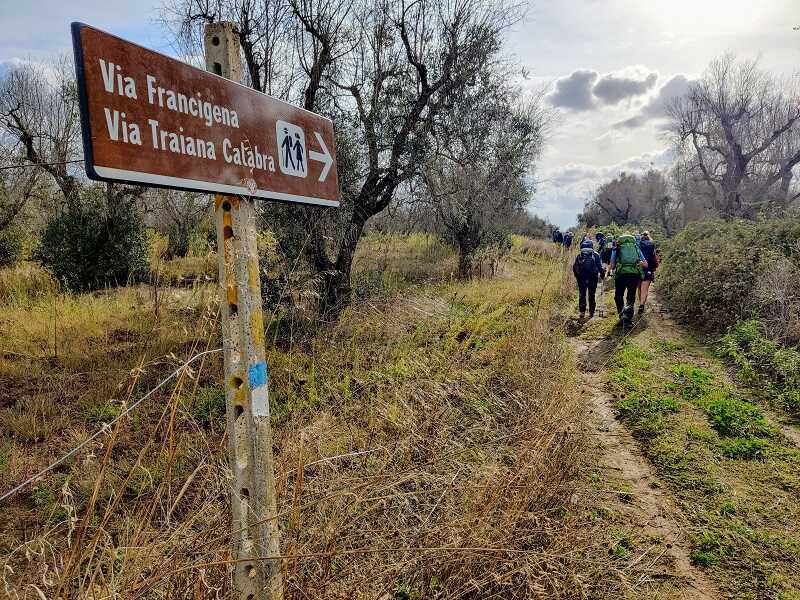 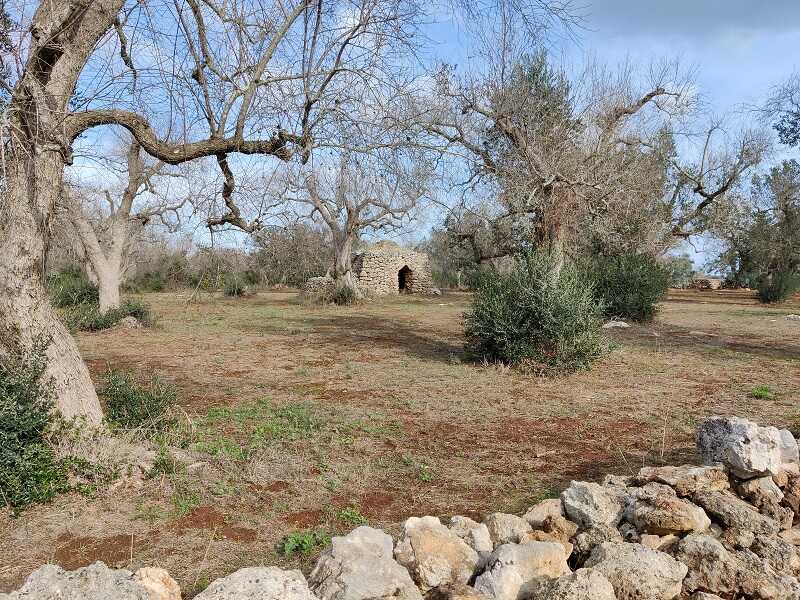 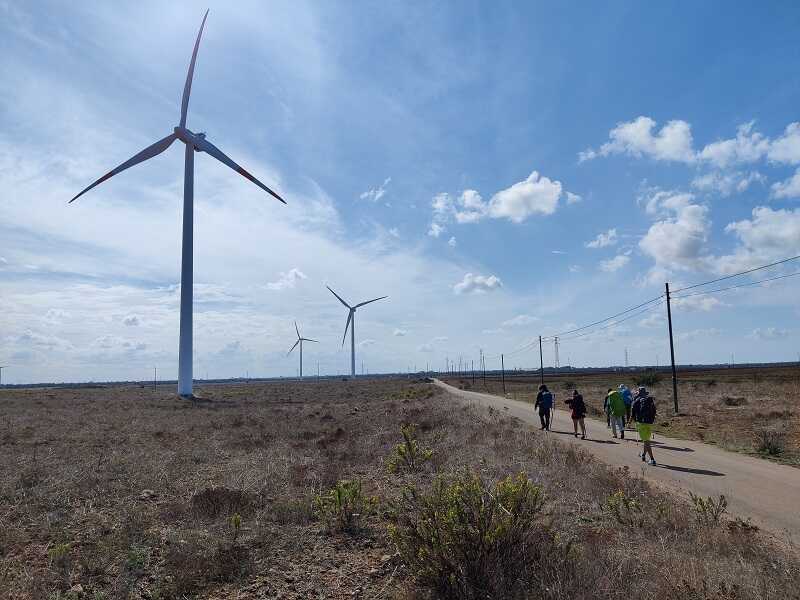 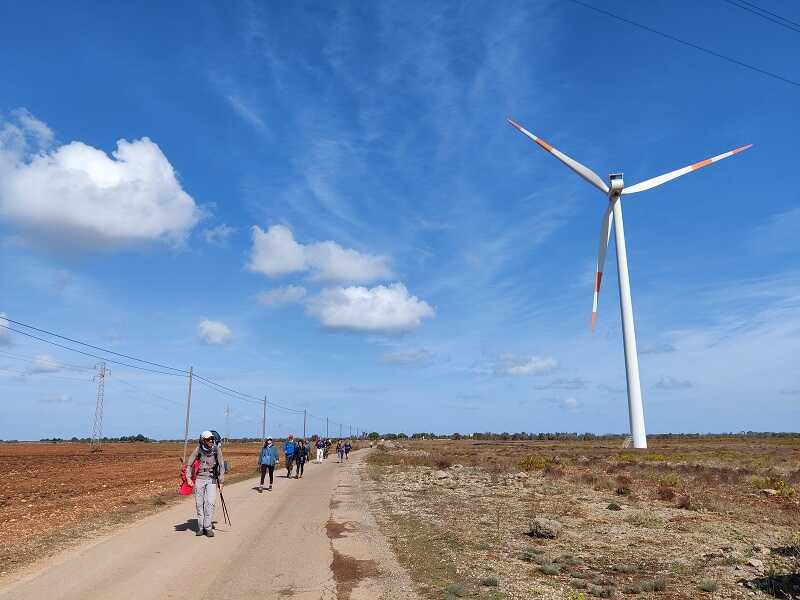 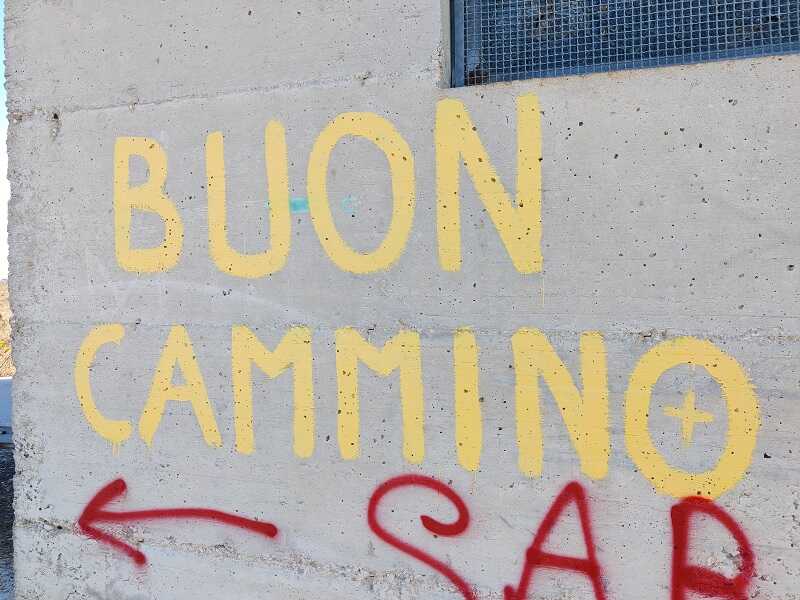 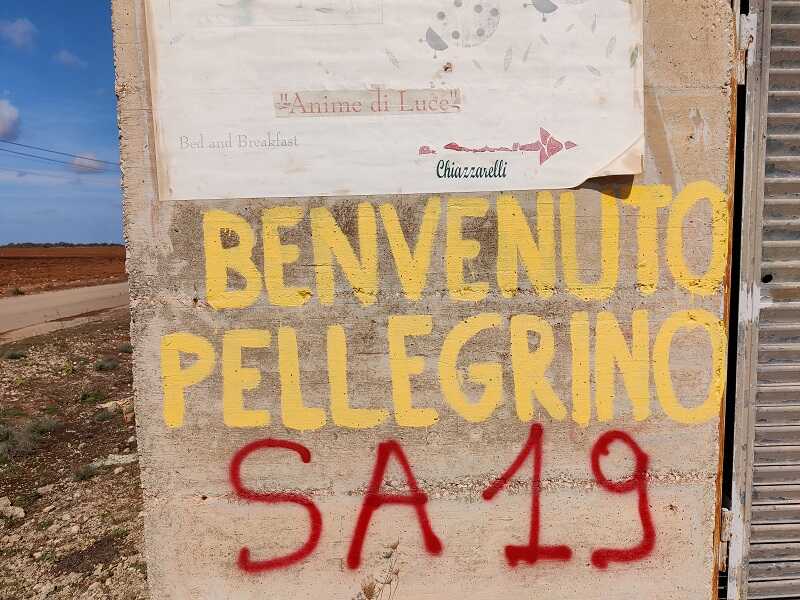 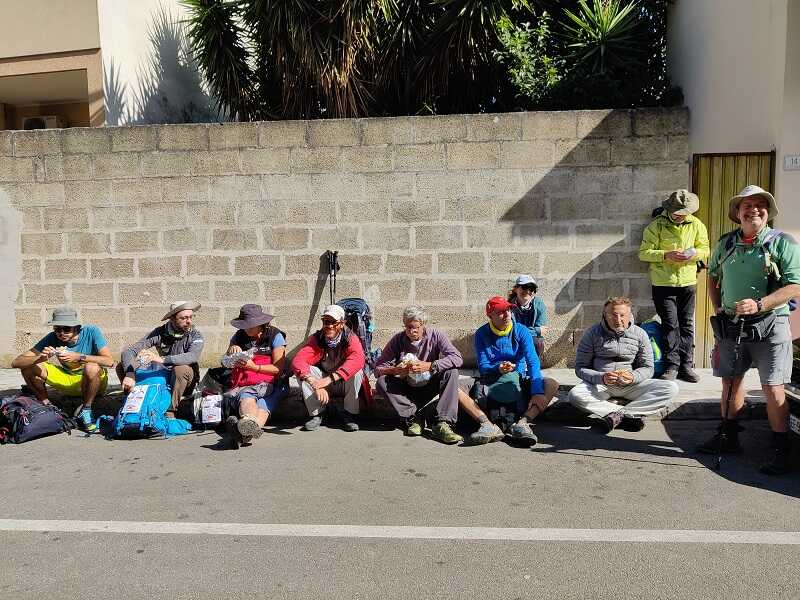 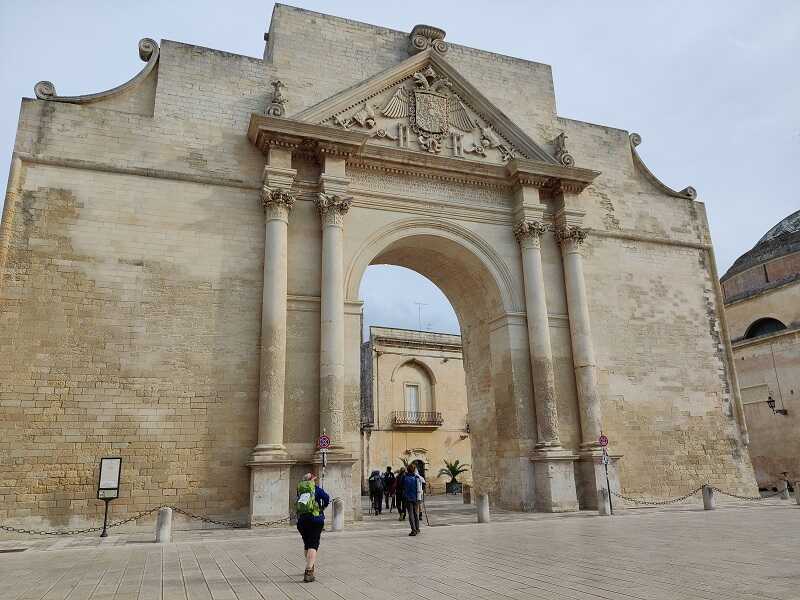 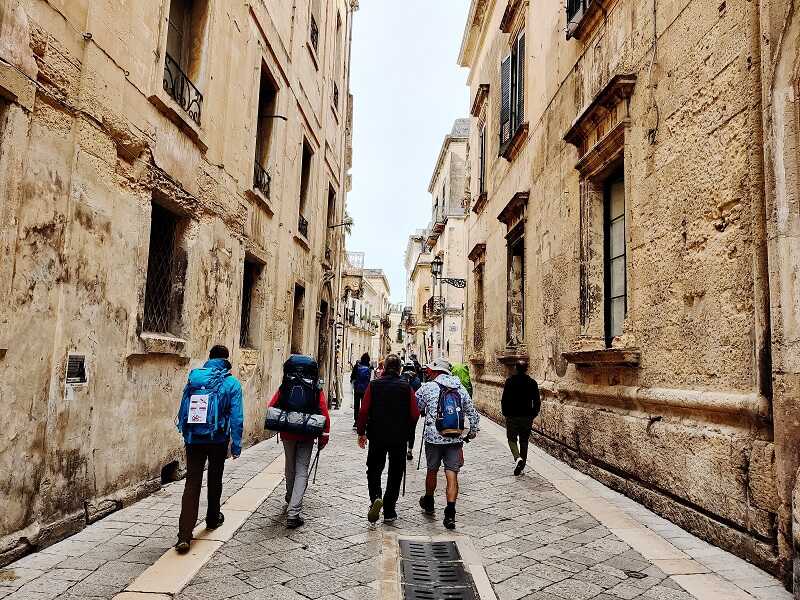 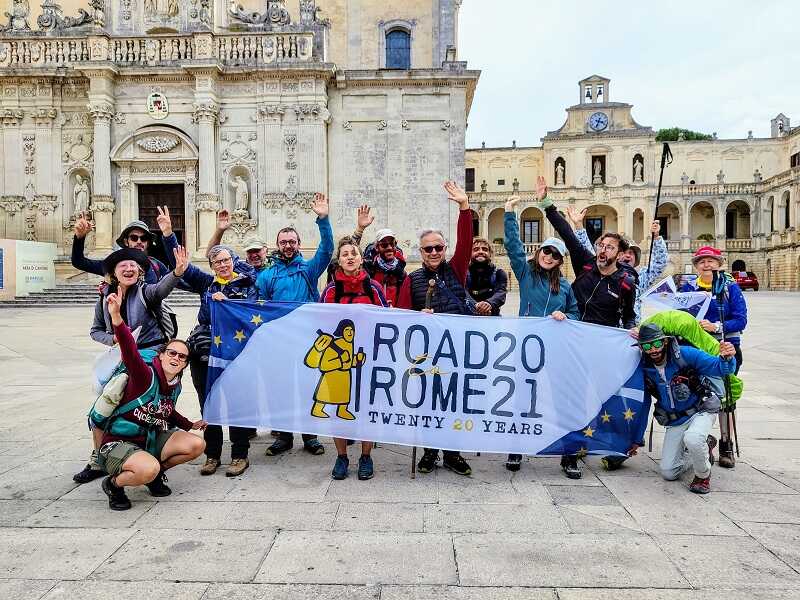 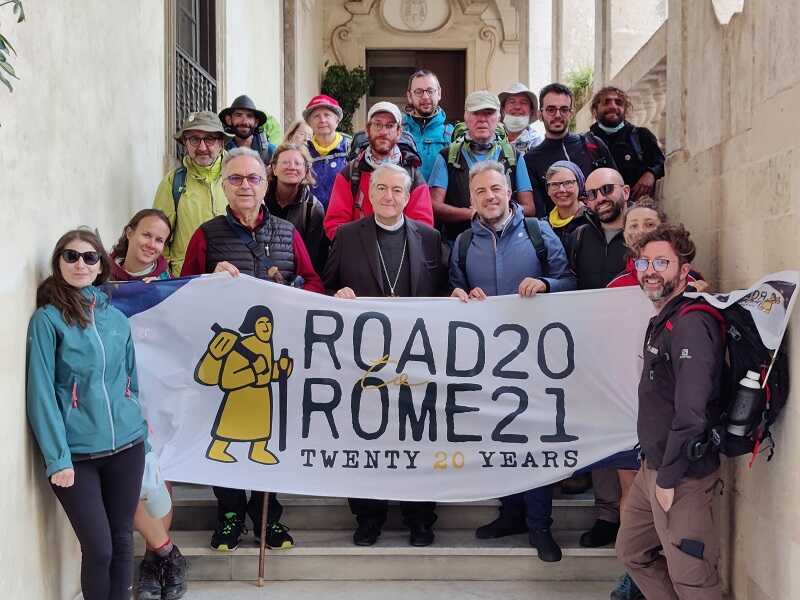