Day 46 – Verrès to Pont-Saint-Martin: a trail of iconic, picturesque and invincible towns

Today was another very intense day – there is so much to say I had to take notes and organize my thoughts before writing the blog!
Not only Diego Passoni and Sergio Valzania walked with us today, but also Charles Bonaparte, a very very tall man who is a descendent of Napoleon Bonaparte (who was instead – they say – quite short)!
Our local guide, Francesca, had a lot to tell us along the way. The first stop of our picturesque journey was a very charming village, Arnad, where we visited the main church and met the mayor. Arnad is already associated with EAVF, and the mayor explained how important slow tourism is for a village like this, which used to survive only through agriculture, and would now risk disappearing and being cut out of the main tourist routes if it weren’t for forms of tourism such as traveling along the Via Francigena. The town is therefore investing a lot in restoring the aesthetics of this typical mountain village, a wonderful happy story that fills me with pride.
We took a lot of pictures and then continued walking, crossing the Ponte di Echallod, a beautiful historical bridge. We were then happy to arrive in Hône and to the very well-known Fort of Bard. Many people know the Fort because it was one the key locations of a big battle in one of the Avengers movies. Not everyone knows, however, that it is here in Valle d’Aosta, above Hône and along the Via Francigena! In the movie, the Fort floats up impressively into the sky during the battle and then comes back down – for those of you who are fans.
The mayor of the municipality welcomed us warmly into the town hall and gave us wooden gadgets for our backpacks as gifts. We were served polenta with sausages and wine (I didn’t want to get back walking after that), and the regional RAI television visited us, interviewed some members of the group, and filmed us at the Fort, making us feel like superheroes. We finally got back to our feet and walked to Donnas, another iconic piece of the Via Francigena because of its ancient roman street carved into the rock along the trail; you can still see the tracks built for carrying carts and there is an authentic old gate, also carved in the rock. The trail led us to our final destination for today: Pont-Saint-Martin, which we entered across a roman bridge – a lot of Roman influences are evident in this section.
Here is a nice story to tell you. Destination Napoleon is the name of another of the Cultural Routes of the Council of Europe, as the Via Francigena is. This itinerary does not have a single starting point and ending point but is an intertwined network of roads. One section of Destination Napoleon follows the same trail of the Via Francigena – from Martigny to Fort of Bard. The overlap in this area is the reason why we met up with some other groups of walkers today, including Charles Bonaparte: there is a strong synergy and collaboration between those who take care of one and the other route! It’s great to get to know and learn about each other’s experiences. The section of the route that we share is incredibly beautiful and full of surprises – I am enjoying Valle d’Aosta so much! 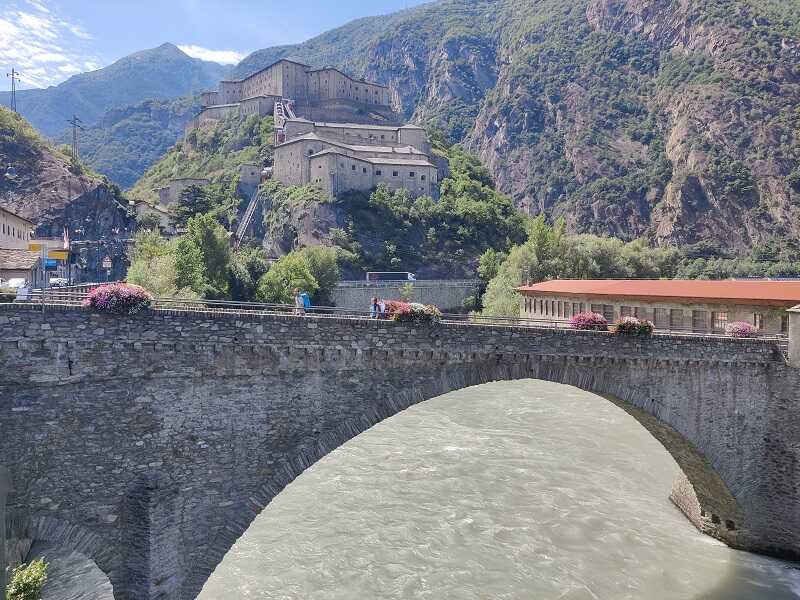