The Via Francigena in 2021 set off again: here are the numbers

The European Association of Via Francigena ways (EAVF) analysed a sample of 1430 credentials distributed during 2021 to provide some important statistical data.

There is a renewed desire for the Via Francigena and for walking trips, but especially for starting to travel again. This was one of the motors behind the organisation of the relay march “Road to Rome” by EAVF in 2021, indicating the relaunch after Covid-19 and promoting the Via Francigena on an international level. A European event built to celebrate EAVF’s 20th anniversary.

With these premises, an analysis of credentials distributed by EAVF in 2021 was undertaken.

The result is a set of estimates, which are not exhaustive but can stimulate reflection on the potentialities of the Via Francigena: together with the other routes, the Via represents an ideal example for post-pandemic tourism. The itinerary, in 2019, had registered about 50 thousand pilgrims walking for at least one week along sections of its trail. During 2021, estimated pilgrims were around 40.000.

The internal analysis is based on a sample of 1430 EAVF credentials distributed in 2021 between Canterbury and Rome mostly from May to September. The main distribution points are concentrated in the northern Italian section of the Via Francigena, i.e. Ivrea, Lucca, San Miniato, Piacenza, San Gimignano, Siena, Viterbo e Roma. There has also been a remarkable increase in distribution points along the route in Switzerland.

Regarding the use of credentials, some considerations can be useful: as a result of questionnaires undertaken by EAVF in 2019 and 2020, it seems that about 30% of pilgrims uses the same credential in multiple years, walking or cycling an average of 7-8 days per year along the Via, in different sections. 20% of walkers who do not sleep in pilgrim hospitality facilities, instead, declares that they do not buy the credential at all.

As for distribution numbers, many different entities, locally and nationally, lay or religious, currently distribute their own credentials. 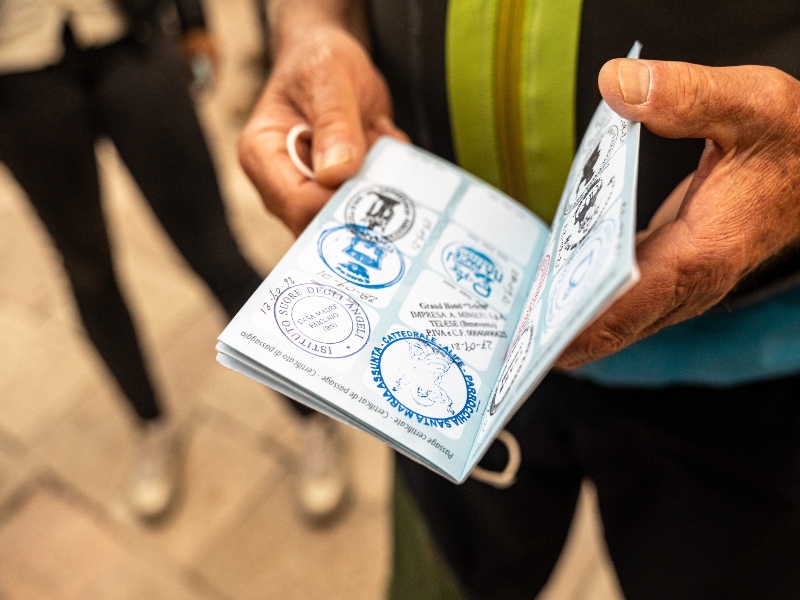 There is no way to verify the total number of distributed credentials, and most of all it is hard to observe the number of pilgrims that arrived in Rome, as there is no observatory in the city that can measure these numbers quantitatively and qualitatively – which happens, instead, in Santiago de Compostela.

Age group. Compared to 2019, the most significant and relevant datum is the increase in the number of young people traveling along the route: 5% are under 17 years old (2% in 2019), while 13% is among the age group 18-24. The highest rate is among the age group 45-54 (21%). The presence of young people on the route is a very important element witnessing the attractiveness of such an experiential and cultural journey for a new target, which has been mostly absent on the Via Francigena until now. Young travellers are mostly students traveling for their summer holidays, alone or in small groups, having a life experience and not only a holiday break. 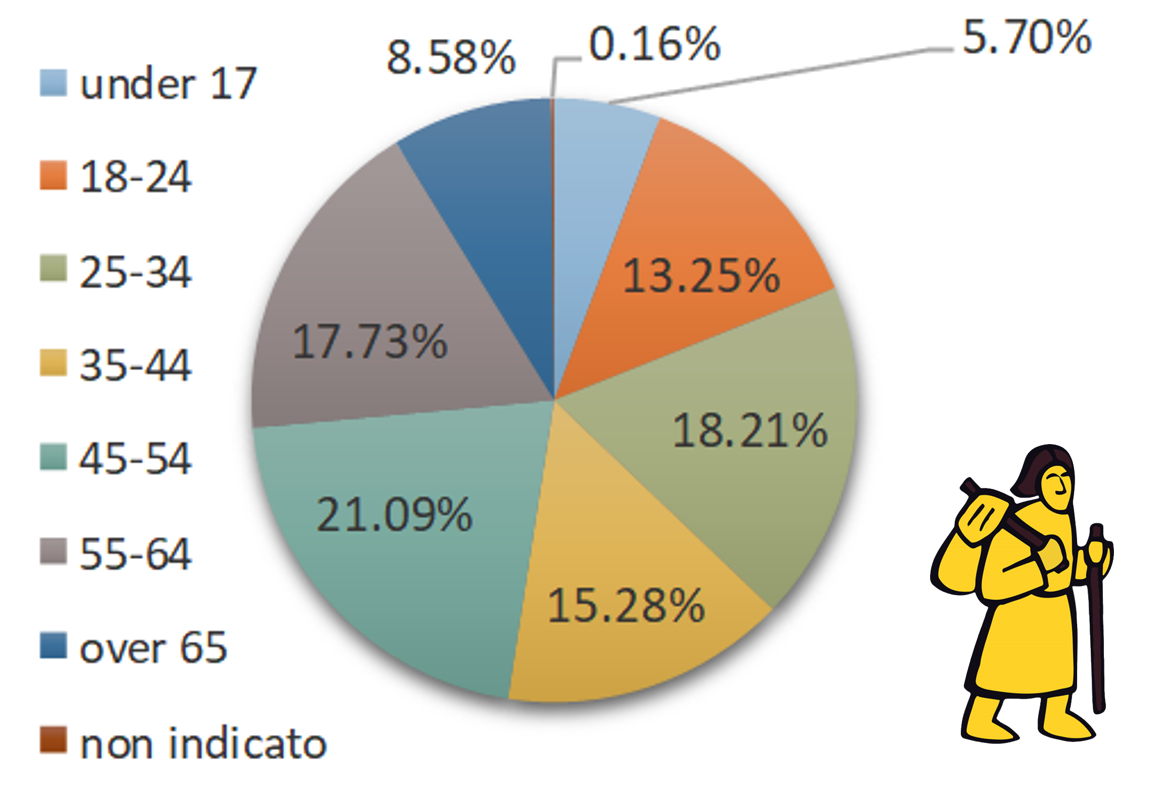 Sex. The proportion between men and women is respectively 44% e 56%.

Nationality. Due to the pandemic, which limited international movements and encouraged proximity tourism, almost all pilgrims were European (98%). Within this numerous group, most pilgrims are Italian, French, Swiss and German.

Sections covered and destination. The most popular sections of the route are Italian, and are the regions of Lazio and Toscana, respectively chosen by 49,10% and 31,05% of total pilgrims. Following, in order of attendance, are: Piemonte, Puglia, Valle d’Aosta, Canton Valais, Liguria, Lombardia, Emilia-Romagna and Campania. The high presence of walkers in the southern section of the Via Francigena, especially in Puglia, is a very significant result which will increase in the coming years.

The main destinations chosen by pilgrims are Rome (42,73%) and Siena (15,72%) followed by Viterbo, Lucca e Ivrea. Usually, Rome is chosen as final destination by pilgrims who walk the Via for over three weeks, whereas the other locations are chosen by those who walk an average of few days to two weeks.

Journey motivations. The main motivations behind the journeys of pilgrims are the hospitality and sharing spirit, the spiritual dimension of pilgrimage, the tourism attractiveness of crossed places and the cultural dimension. Following are environment, sports, and religion.

In light of these numbers, which we specify being simple estimates and not scientific data, we can make some final considerations.

“Via Francigena – Road to Rome” effect. The relay march organised by EAVF between 15 June and 18 October 2021 certainly contributed to increasing the international popularity of the Via Francigena and deserves credit for involving 638 local communities along the route. From the estimates above it results that about 10,000 people in England, France, Switzerland and Italy met the Road to Rome group of walkers, while 3,500 walkers accompanied the group for one or more stages.

Social-economic impact of the Via Francigena. The Via Francigena today generates an estimated monetary flux of 20 million €, distributed in a differentiated way across the European route and proportionally to the attendance of pilgrims in that area. The average expense of a walker is 40/45 € per day, whereas that of a cycler is 60/65 € per day. On top of the total monetary value that falls on territories along the route (bars, restaurants, accommodation, services), we must add the expenses of pilgrims for technical equipment, clothing, transports to reach the points of departure and to return from their destination.

Finally, we must not underestimate the interaction of pilgrims, coming from different countries and regions, with local communities. With them, they sometimes create a proper cultural osmosis.

The IRPET study and the flux increase

Supporting the social-economic impact of the Via Francigena, Regione Toscana presented in August an update for the IRPET study on the flux of walkers and tourists along the Via and in bordering areas. To summarise it, the net effect of restoration in terms of overall additional presences is 613 thousand additional presences in the decade 2009-2019, including all 37 municipalities in Toscana (10 of which are already large tourism destinations).

Arrivals, presences and the number of facility structures increase as one comes closer to the route: e.g. within 10 km the percentage variation is respectively 62%, 35% and 40%, while it drops to 30%, 12% and 30% between 10 and 20 km of distance from the route. The final version of the IRPET study will be presented in early 2022 by the Tuscany Region.

For further information on the IRPET study click here

These important numbers demonstrate unmistakably that investment in infrastructure and promotion of the Via Francigena can generate social-cultural-economic development among crossed territories. The post-Covid pandemic period that we are still experiencing shows that experiential tourism related to the Via can easily keep growing. This growth will increase at the increasing of investments in pilgrims’ hospitality structures, in safety and maintenance of the trail, and in signposting. 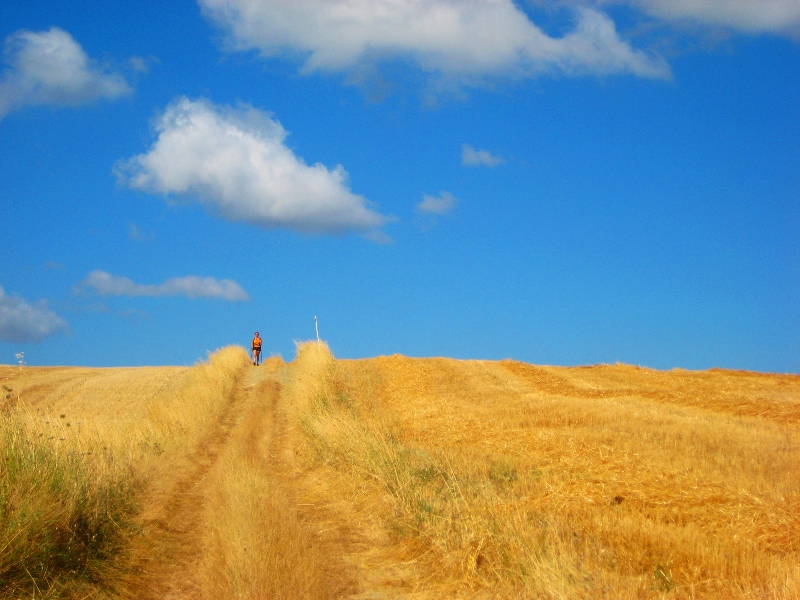 PrevThe new edition of the “Via Francigena” magazine has been published: a special edition to be collected, entirely dedicated to “Road to Rome”!
AEVF and Garmont: a successful collaboration continues in 2022Next