The municipality of Saint Maurice (CH) becomes an EAVF member!

Saint Maurice, a small municipality in the Canton of Valais with great strategic importance, is located along the Swiss stretch of the Via Francigena, exactly halfway along the route followed by archbishop Sigeric on his journey to Rome. The European Association of Via Francigena Ways is incredibly happy to enrich its network with such an important institutional member, therefore we warmly welcome Saint Maurice and its representatives!

Saint Maurice is situated along the 51st stage of Sigeric’s itinerary and in Roman times was called Agaunum. It was located at a bottleneck formed by the Rhone river, thus taking on a role of great strategic importance. The famous Theban legion was stationed here, led by Maurice and exterminated at this location in the 3rd century for refusing to swear an oath to the gods before the battle because they had converted to Christianity. The martyrdom of St. Maurice and the legion turned ancient Agaunum into an important pilgrimage site along the Via Francigena.

The Abbey of Saint Maurice was founded on the tomb of the martyrs in 515 by Sigismund, son of the Burgundian king. From that moment the Abbey played an important role, becoming the centre of veneration of the martyrs and the main abbey in the Burgundian kingdom, as well as a pilgrimage destination. The Abbey of Saint Maurice thus became the oldest Christian monastery in the West and has been operative uninterruptedly since its foundation. Bearing witness to this past are the commemoration of Saint Maurice every 22 September and the Laus perennis, the perpetual prayer of the canons at the tomb of the martyrs, a custom that has continued for 1500 years.

Even today, Saint Maurice is the seat of ecclesiastical institutions and is known for its basilica and its church treasure, which contains rare masterpieces of sacred goldsmith’s art. Wars, fires, and falling rocks have repeatedly destroyed the funerary oratories, churches, and monastic buildings built in the 4th century at the foot of the cliff overlooking the site. The church was destroyed in 574 during a Lombard raid, but was rebuilt and enlarged based on the same floor plan under St. Gontrand (561-592). Numerous reconstruction phases and extensions followed.

The Trésor de l’Abbaye, one of the richest in Europe, consists mainly of reliquaries, including for example “St Martin’s Vase” and Theuderic’s casket both dating back to the 7th century A.D., as well as Charlemagne’s aquamanile from the 9th century and the so-called “bag of Saints Innocent and Candide” from the 12th century.

This small jewel of nature, art, and history has been a valuable part of the Via Francigena over the past centuries and now hand-in-hand with EAVF will continue to amaze pilgrims and visitors alike in the decades to come!

– The Castle of Saint Maurice 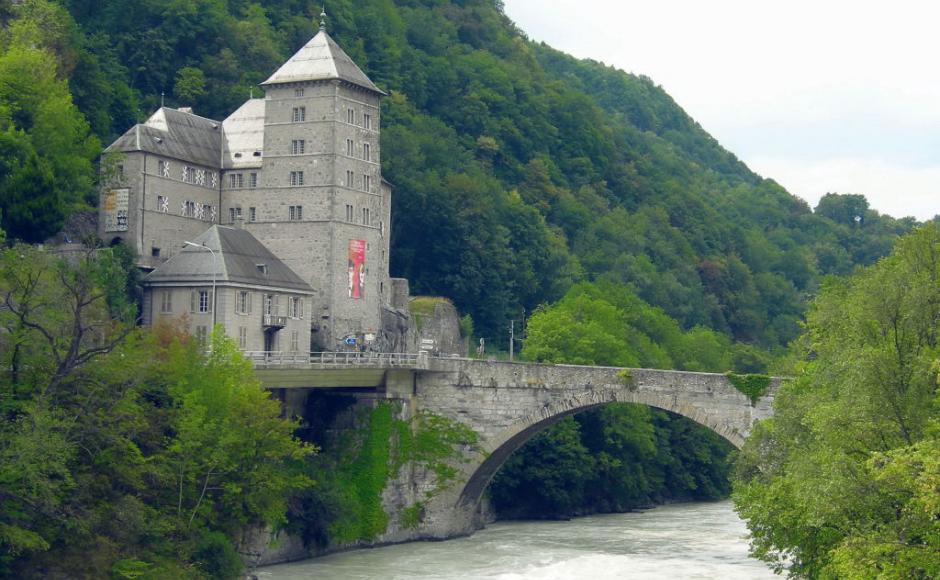