Day 82 – Velletri to Cori: a jump in tradition

Shortly after leaving Velletri, we had a special moment awaiting us: there is a point in which three municipalities and two provinces meet – the municipalities of Velletri, Artena and Cori, and the provinces of Rome and Latina. Exactly in this spot there was a recent change of itinerary: apparently, the trail used to cross an area which is not particularly safe nor properly marked – not particularly enjoyable for pilgrims. The municipalities, the Region of Lazio, and the Gruppo dei Dodici association, together with some private companies, decided to create a new trail, by creating three new bridges crossing the ditch. The passing of the Road to Rome represented the official opening of this itinerary, with the presence of some institutions, such as the municipal councils of Velletri and Artena!
We took some pictures to preserve this important moment for the Southern Via Francigena, which needs this type of collaborations to continue to grow. A good example to follow! After this official moment we came close to the Giulianello Lake, which I’ve heard about before. At first sight, it didn’t seem particularly interesting, but when you arrive to the opposite side you find a perfect reflection of everything that surrounds the lake. A true spectacle, with a blue sky and green hills…it seemed like a painting. It’s not a case that many artists painted this view: I was very impressed and took many videos and pictures. I absolutely recommend stopping here.
From the lake we started walking towards the town of Giulianello. Along the route we found some panels with QR codes: by scanning them, we could listen the chants of local women. According to tradition, when women would work in the fields, they would sing religious and popular songs to relieve their fatigue. Arriving in Giulianello, we found four women singing these songs for us. One of them was 100 years old! I tried to imagine her as a young girl working in the fields that we had just crossed, singing the same melodies. A very engaging moment organized by the municipal council of Cori, Simonetta, who was there to welcome us: she told us that they really care about conserving this tradition, being an intangible asset.
We ate on the terrace of Lucia’s Bistrò del Caffè del Cardinale, who walked with us yesterday and today, and whom I want to thank warmly. Our veggie-based lunch was amazing! Also, in the center of Giulianello it’s fun to explore the crochet works that the women of the town prepared to cover up lampposts and benches as decorations. A great way to enrich and color the village. After Giulianello, we went on towards Cori, arriving at the Lepini mountains with Rocca Massima in front of us. The view is incredible and it’s really a shame that this area is not well-known: it definitely deserves a visit. From here on, you start walking among olive trees, with a few up- and down-hills, alternated with stops to eat yummy apples, figs and grapes found along the path – yummy!
Entering the beautiful village of Cori, at the top of the hill, we were welcomed by the mayor, by city council Simonetta, and by other representatives from the municipality. A group of flag throwers waited for us, with drums rolling, giving a show in front of Hercules’ Temple, a construction from the first century before Christ. It’s awesome to be here and assist to this performance! Cori always gives me incredible memories and I’m very happy I’ll have a chance to go back to the historical center tonight! 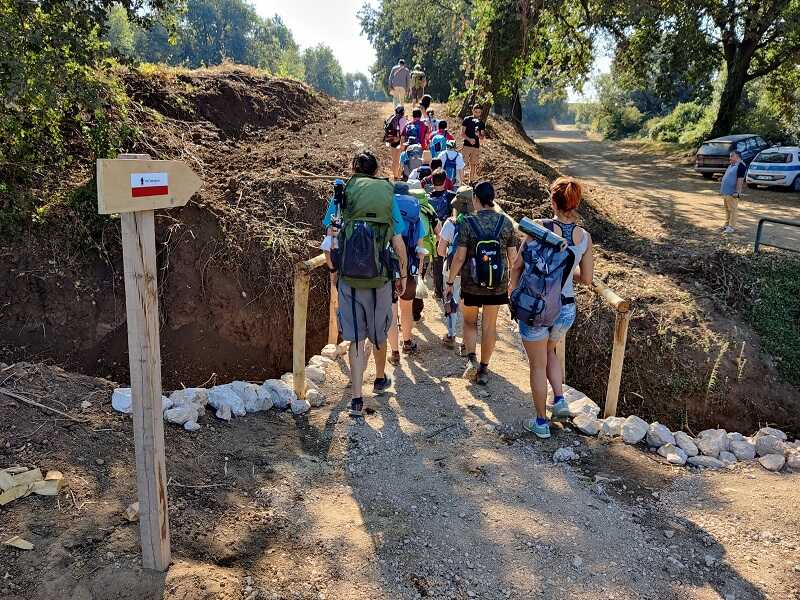 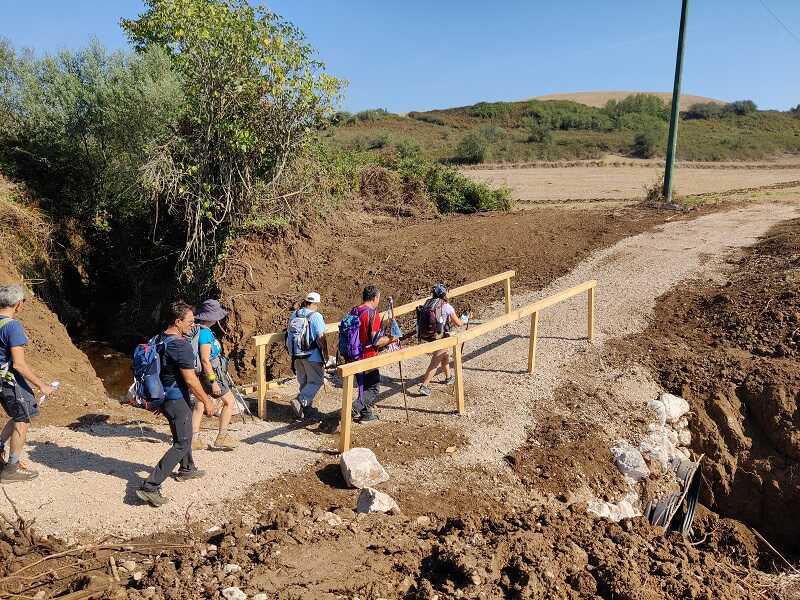 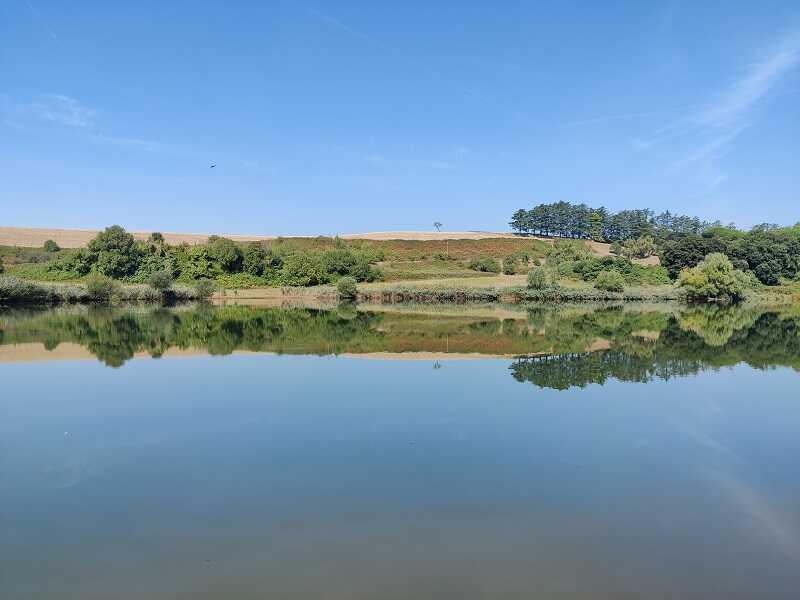 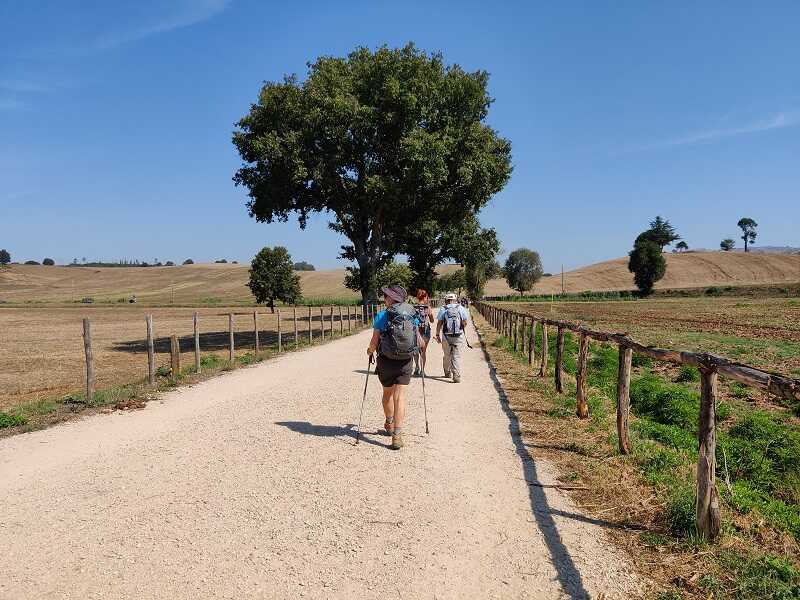 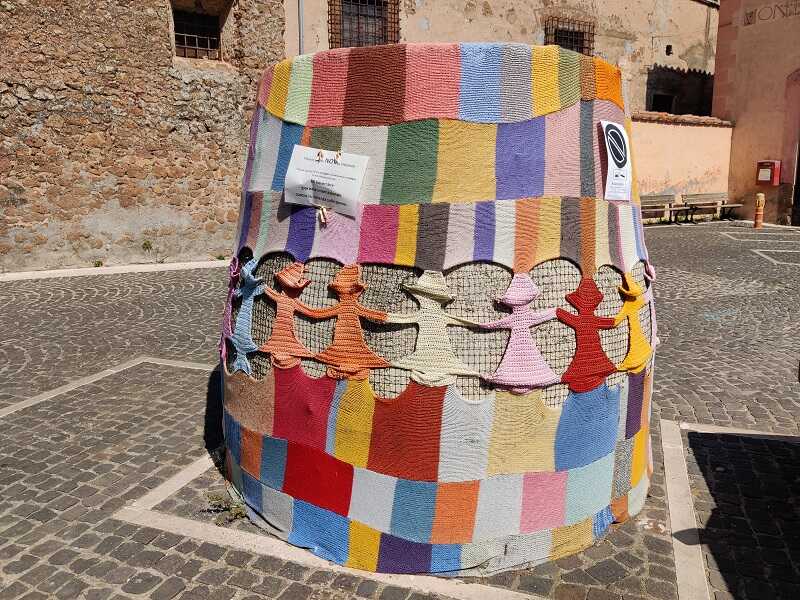 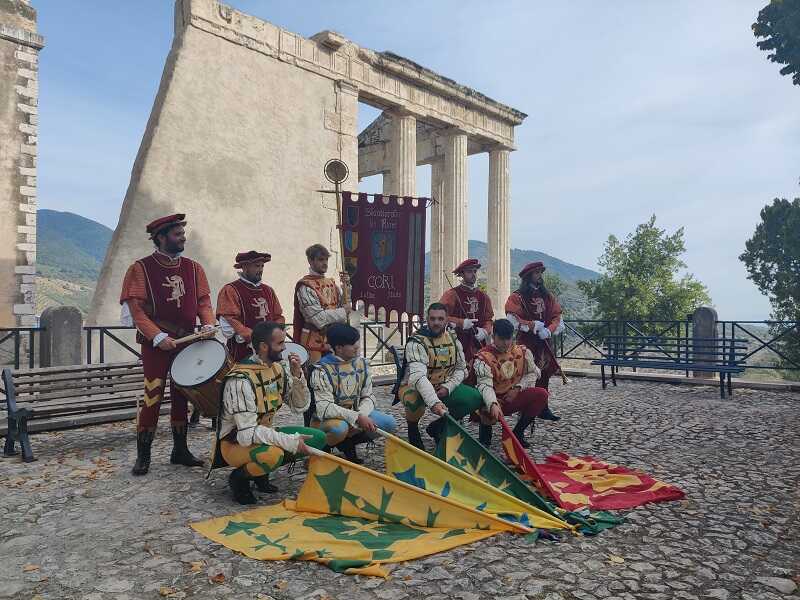 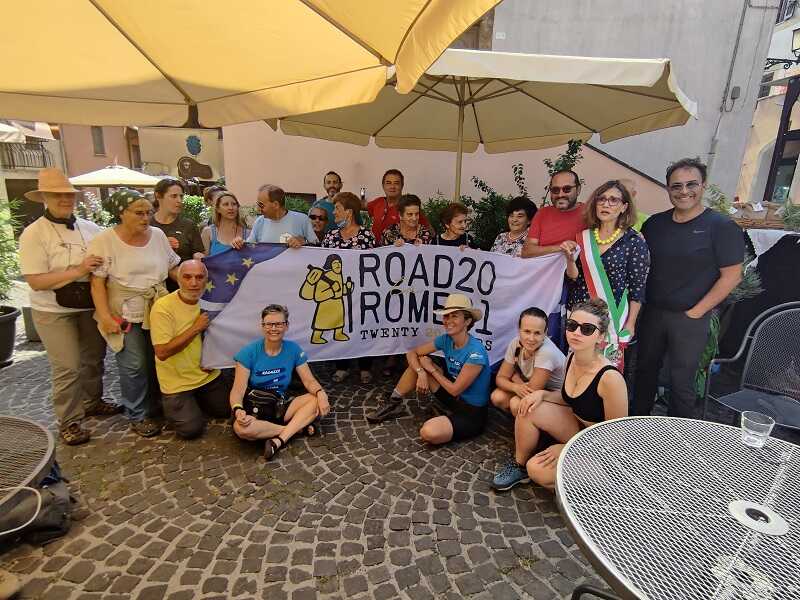