Shortly after leaving Montefiascone, we turned around and waved goodbye to the beautiful Lake Bolsena, which almost became a travel companion in the last couple of days. Vineyards and olive trees, on the other hand, keep traveling with us and make me feel like we’ll never say goodbye.

A long stretch of today’s walk was along the Via Cassia Antica, a stone ancient Roman road, so-called ‘Basolato’, which Romans had built to easily come in and out of Rome, mainly for commercial and military purposes. We’re walking exactly where the Roman legions and merchants used to…and I can faintly imagine how many people walked this trail before us.

I was filming this beautiful road when it started raining. We all pulled out our rain jackets and continued walking. After about one hour the rain stopped, and the air stayed fresh for the rest of the morning, with clouds keeping us shaded. After these last days of excessive heat, this cool breeze is simply amazing!

At some point during our walk, a filming crew from the region, TG Lazio, caught up with us: they came to film and interview us for the regional news channel on public TV! We have been told by people before that they saw us on TV…but this is more outstanding than ever! And although we walked a bit slower with then, to let them take all the footage they needed, we arrived in Viterbo, our destination for today, ahead of schedule. 📹🎤

The mayor and other members of local authorities were waiting for us beside a brand-new colorful mural under a tunnel, depicting pilgrims walking towards Viterbo and the writing ‘Benvenuti a Viterbo’. The painter was just finishing the last letter when we arrived! What an ingenious way of valorizing a tunnel, a piece of the Via that was probably not as nice before, allowing pilgrims to really feel at home at their arrival. 🎨

From here we moved into the city center of Viterbo. I’ve been here last year as well, but every time I am surprised by its beauty and by its authenticity: some parts of the town are still truly medieval, giving you the feeling of traveling through time. We attended the official inauguration of the new Via Francigena InfoPoint, opened and operated by CAI Vierbo, where pilgrims can get their credential stamped plus all kinds of information about facilities, accommodation, and services along the route, in the province and beyond. A very inspiring model that every town along the Via should take inspiration from and maybe replicate. Why not even create a network of infopoints?! ℹ️

We then visited the church in ‘Piazza del Pellegrino’ (Pilgrim’s Square), where our group of pilgrims, and the pilgrim’s stick, were blessed. We finally signed the pilgrim’s stone at Cinzia Chiuli’s stone and ceramics workshop: all pilgrims passing in Viterbo can go to Cinzia’s laboratory and sign their names on a stone that, someday, will become part of a monument dedicated to pilgrimage. We finally visited the knights templar museum and some parts of the undergrounds of Viterbo – yes, actual ancient underground rooms, corridors and crypts!

Tomorrow we have a break day in Viterbo – a chance to really travel in time and get lost in the labyrinthic stone streets of the city center. We will also have a book-binding workshop in the morning, with a professional artisan – a proper moment of rest and meditation before getting back to our feet!

– Walking the ancient Via Cassia

– Being filmed and interviewed for the regional TV!

Members of the Via Francigena Montefiascone association

Representatives of the Via Romea Germanica 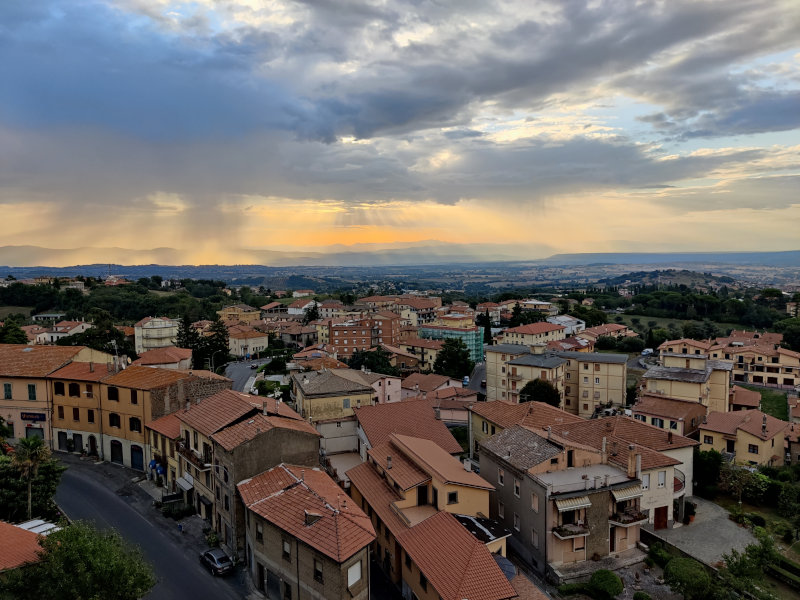 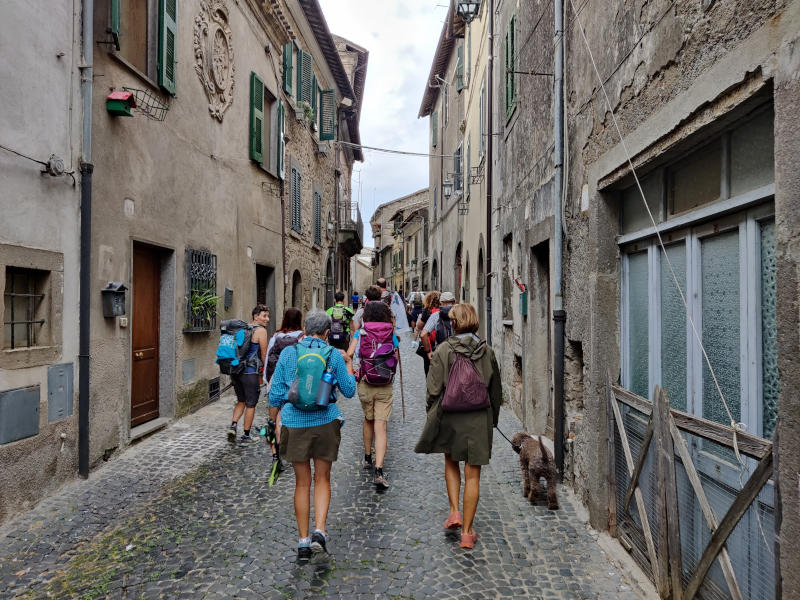 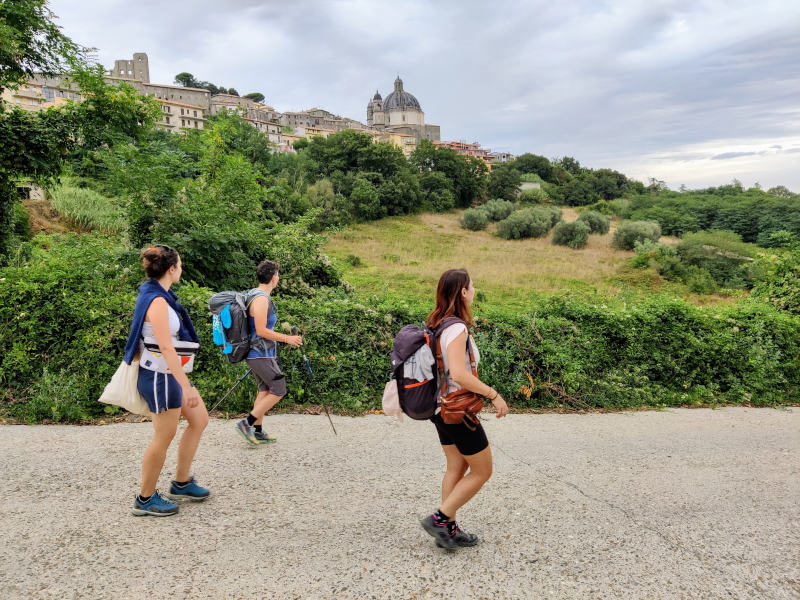 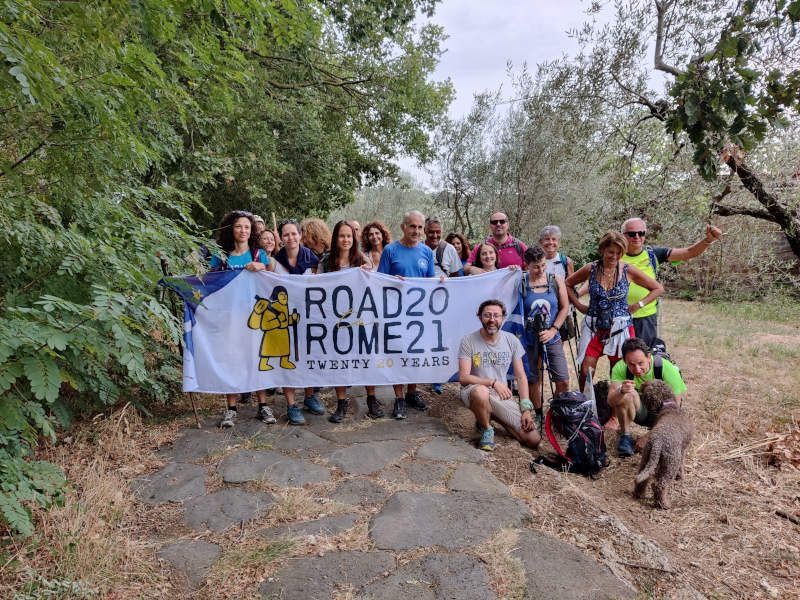 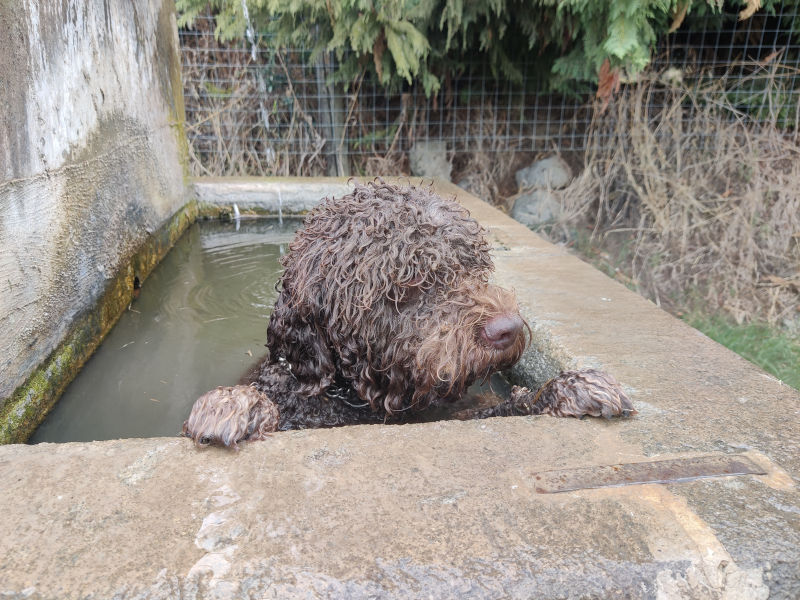 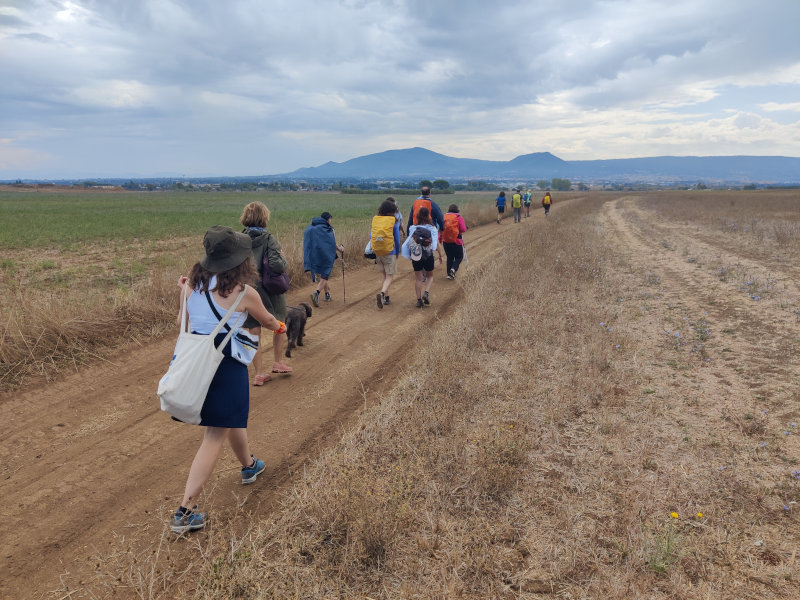 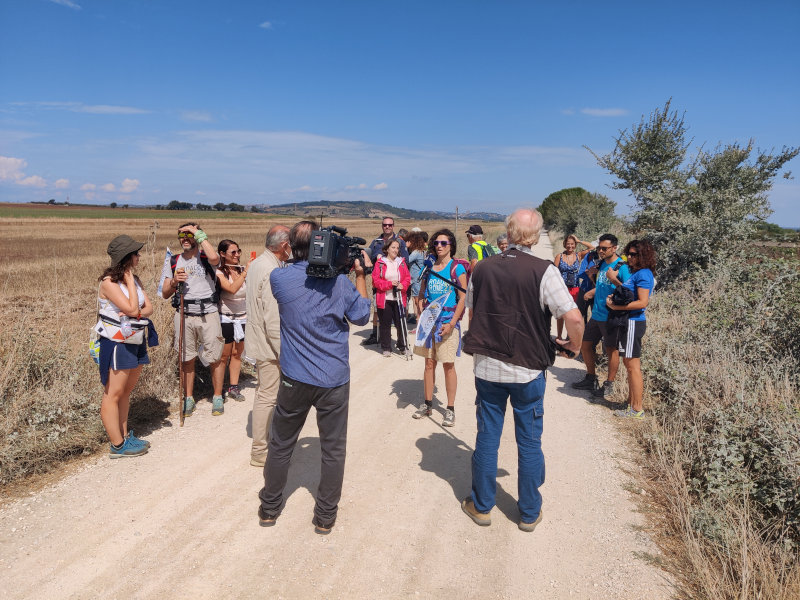 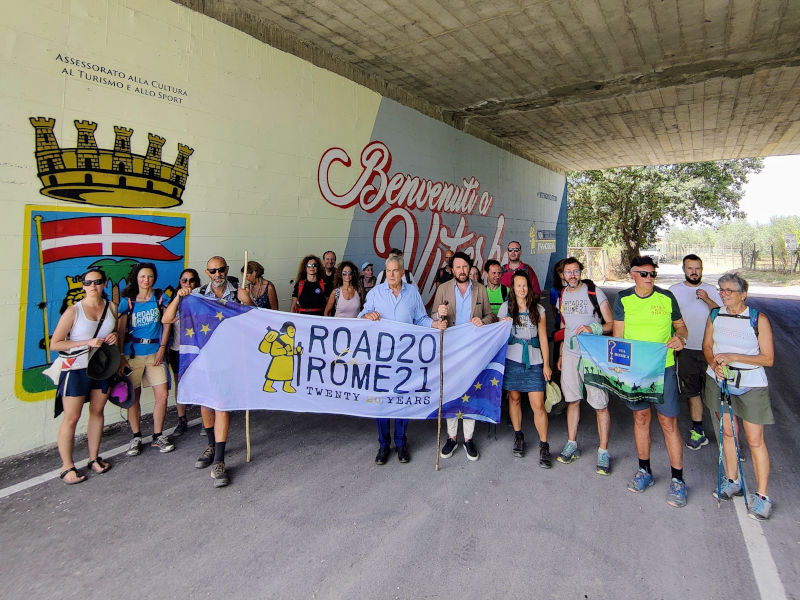 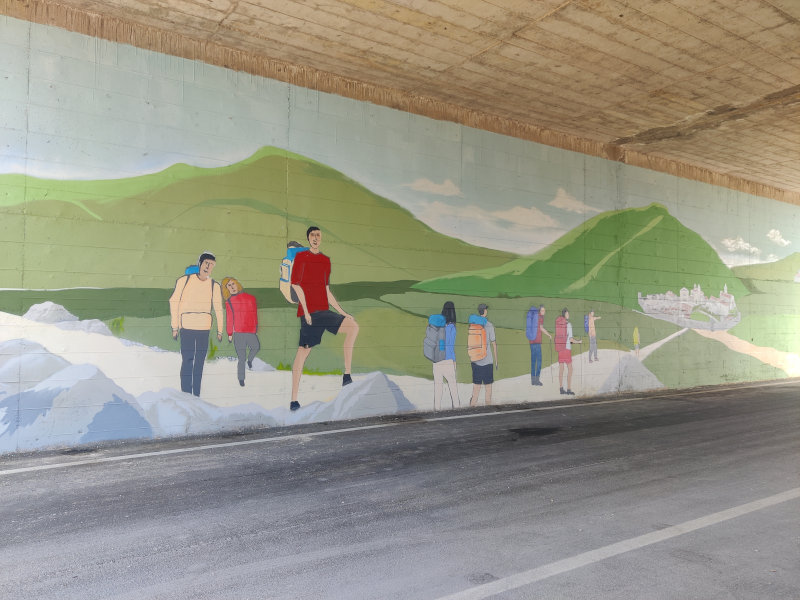 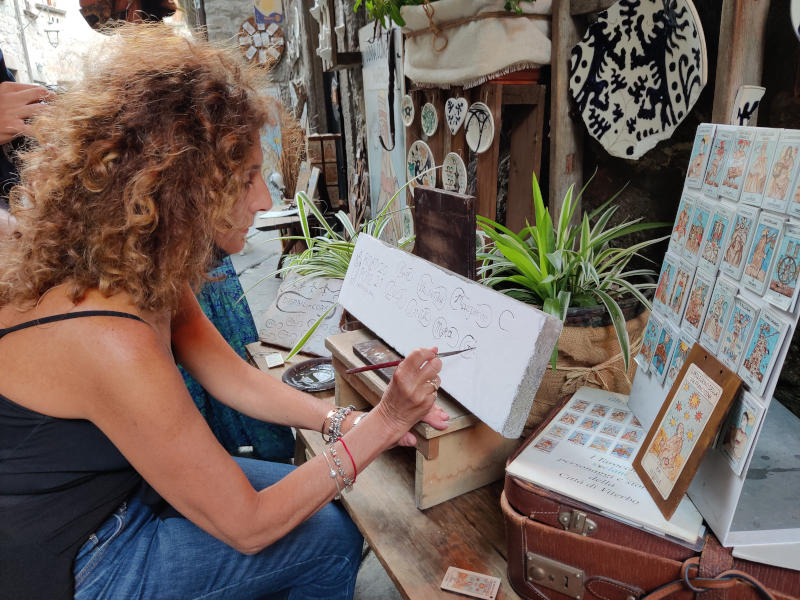 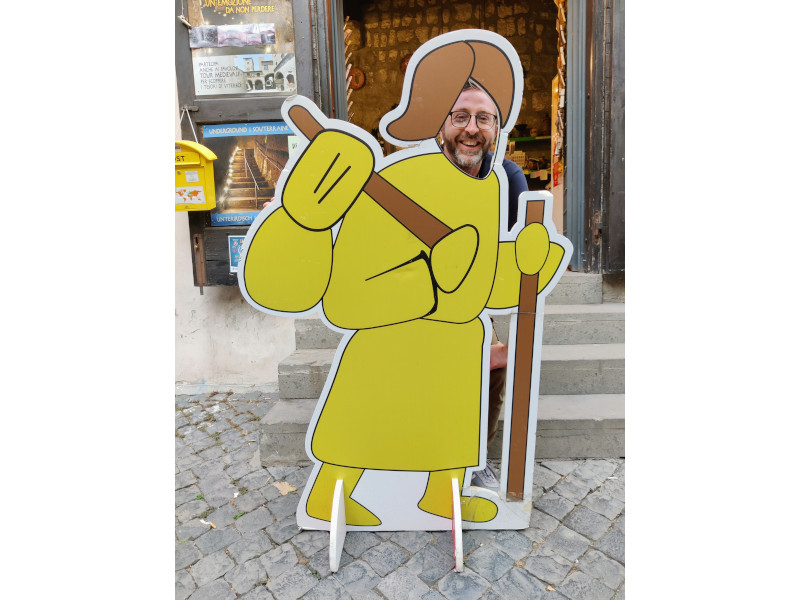