To start with: I’m planning to come back to San Quirico d’Orcia, because I really enjoyed my time but didn’t have a chance to explore it as much as I wanted. Anyway! Before leaving we had a short meeting with SNAM, one of Road to Rome’s main partners, and then set off on a climb leading us to Vignoni Alto, a picturesque small village (with more or less 50 inhabitants) with a beautiful arch opening a view on the Val d’Orcia towards Radicofani. This gateway to Val d’Orcia has recently become a symbol of the beauty of its territory. Radicofani is our destination for today…and it looks very far away! 32 km is a long stage – we have to keep a good pace.
From here we descended towards Bagno Vignoni, famous for its Roman hot springs and thermal baths. We met two town councilors from Castiglione d’Orcia who accompanied us from here towards Rocca d’Orcia and to Castiglione d’Orcia. On our way, in the countryside, we met two pilgrims from Iran, Eva and Majaar (I hope I’m writing it right); Eva was sitting on the ground along the trail. I initially couldn’t understand: why would someone sit in the middle of the road under this hot sun? But when I got closer, I saw that she was holding three cute kittens – Sole, Luna and Stella – that they had found abandoned in Ponte d’Arbia and that the two travelers were carrying along with them. More surprises came: I then tried to speak with Majaar, but as soon as he simply replied with a smile, I understood what Eva confirmed for me: Majaar took a vow of silence and has never spoken in the last 70 days. That’s exactly the number of days I’ve been walking!
We had a vegetarian lunch in Castiglione d’Orcia and visited the Rocca d’Orcia, a beautiful tower on a panoramic spot, at the top of a hill. We soon had to get back on our feet – it was past lunch time and we only had walked one third of our stage, so we started rushing through the yellow rolling fields. We split in two groups and said goodbye to some friends: Nicole, EAVF’s project assistant, as well as ambassadors Marie and Karim, took the Via Francigena variant to Abbadia San Salvatore before heading back home.
As for our route, at some point it leaves the Val d’Orcia and you can see the landscape changing, although remaining rural and hilly. The hills are not so soft anymore, but have harder edges; nature is more wild, somehow less neat (after all, we’re entering a volcanic area!). At the same time, the sky became grayer, and clouds became denser: as the forecast predicted, it started raining before we could arrive in Radicofani – we could see thunderstorm coming and Monte Amiata disappeared in the gray sky. Luckily, the thunderstorm never arrived in Radicofani, and we only got a little wet in the last few kilometers. City councilor Fausto Cecconi was waiting for us in this gorgeous mountainous town (over 800 m elevation), which I’ve never seen before, and we were warmly welcomed for dinner and overnight. Not only: the municipality had organized a concert in the theater – a gentle cuddle for a group of tired ramblers. 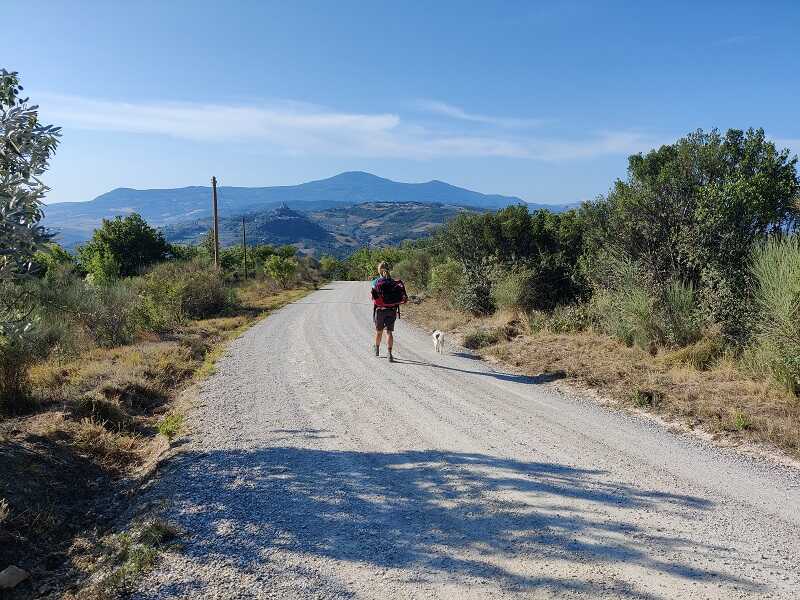 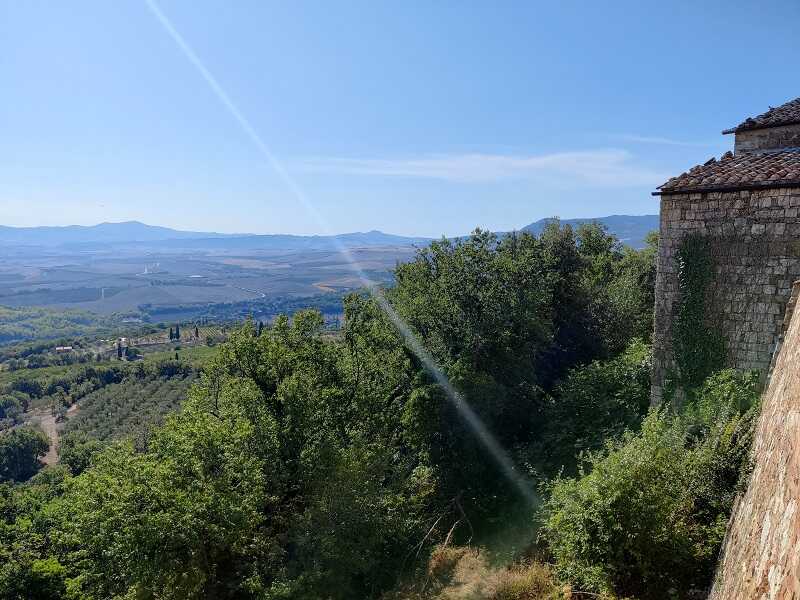 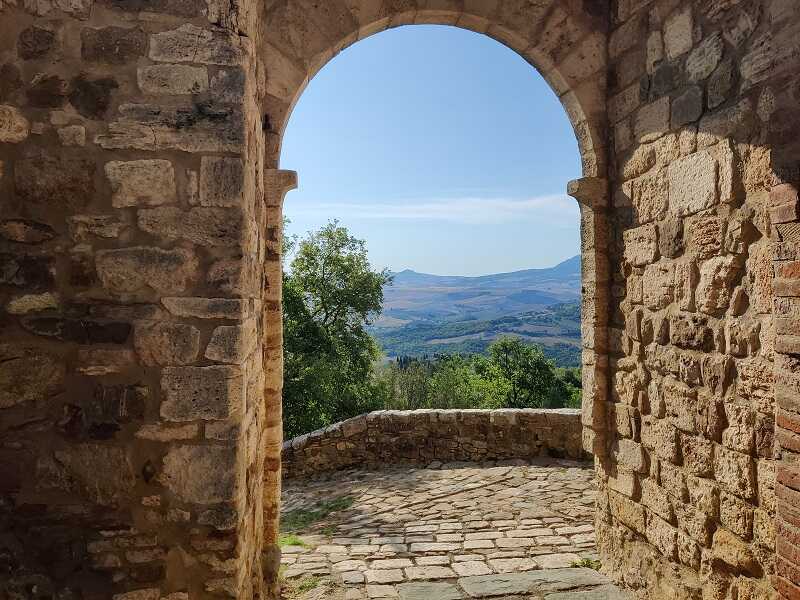 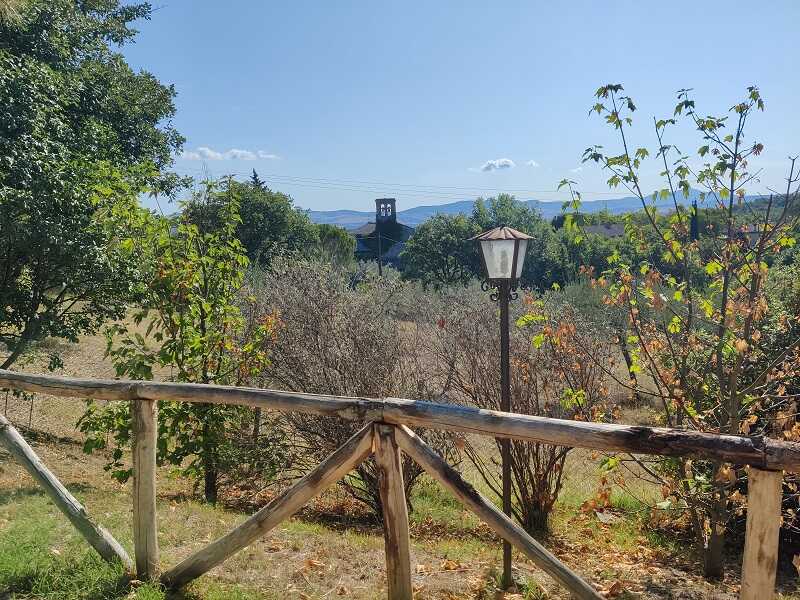 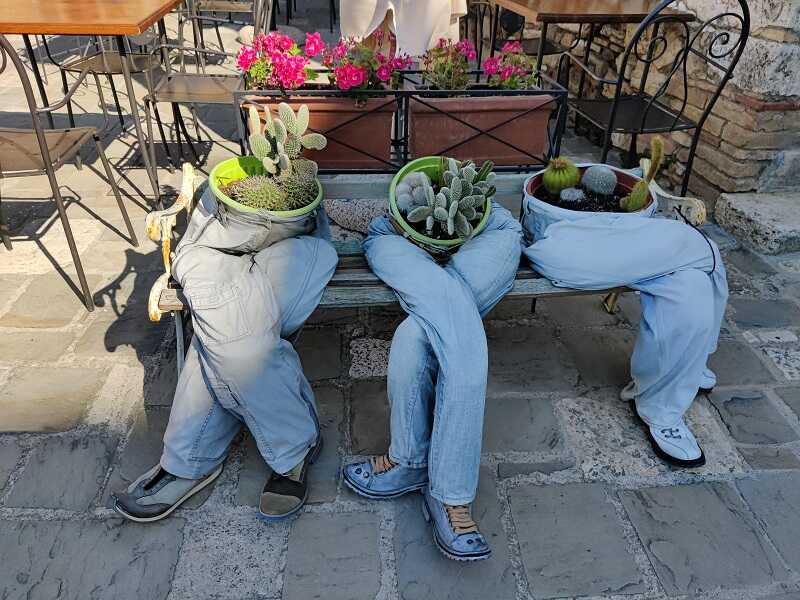 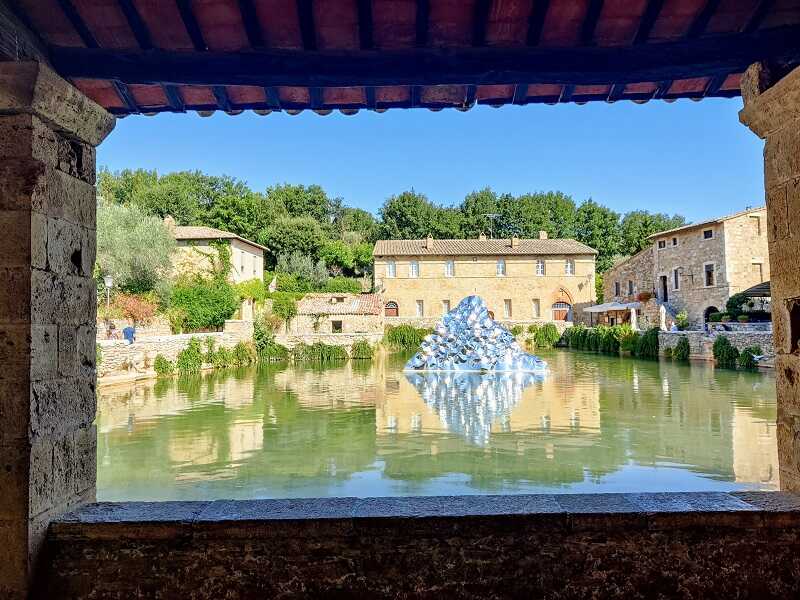 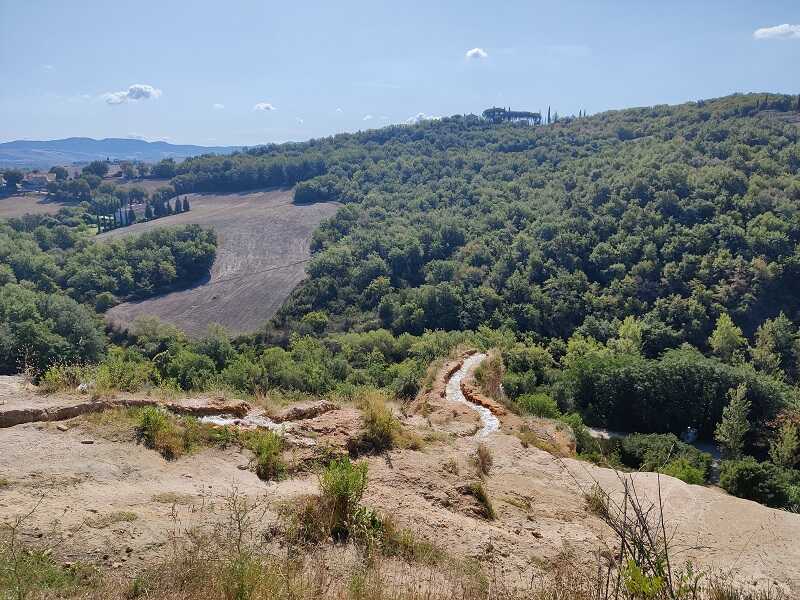 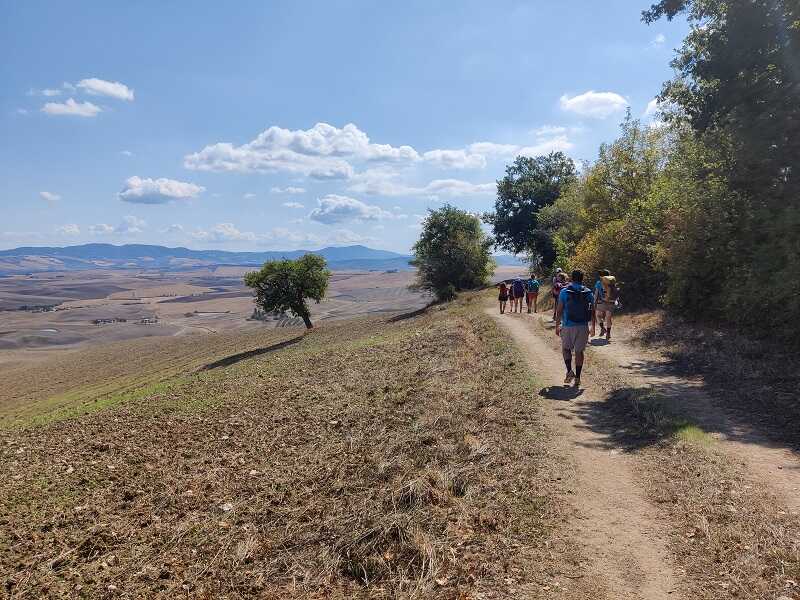 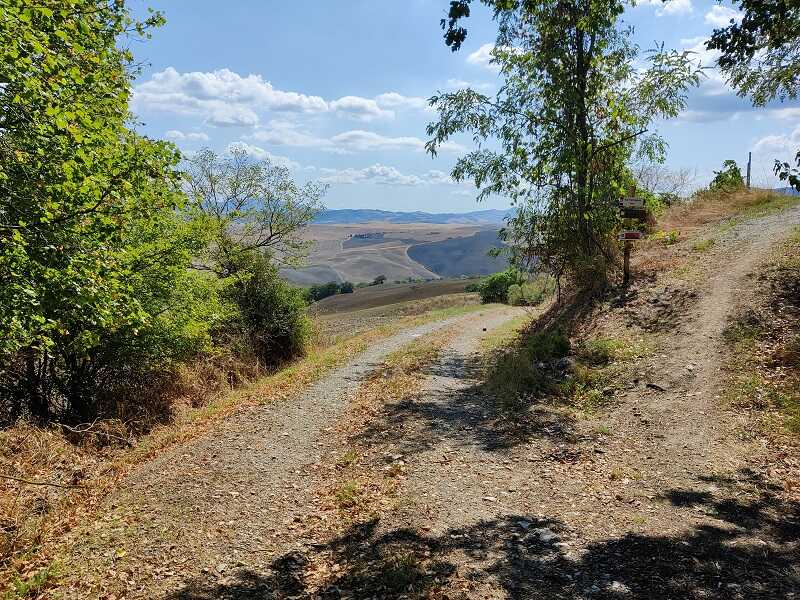 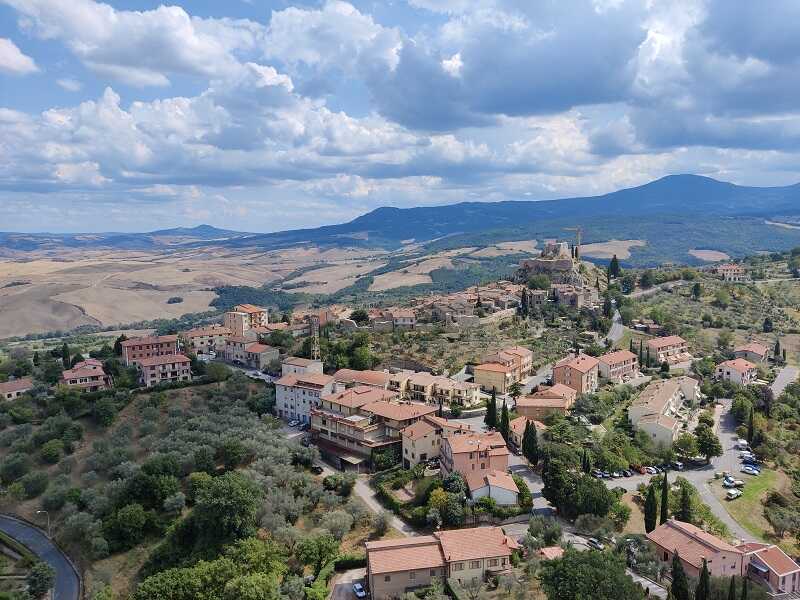 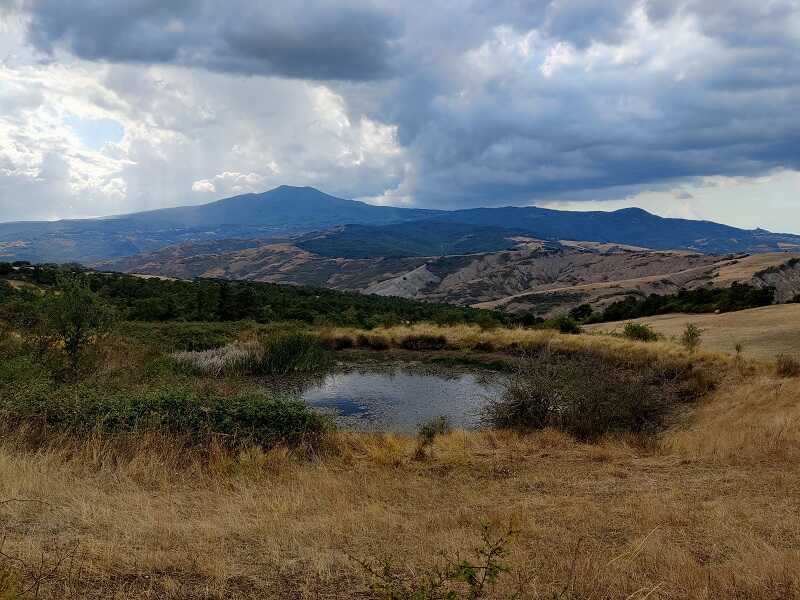 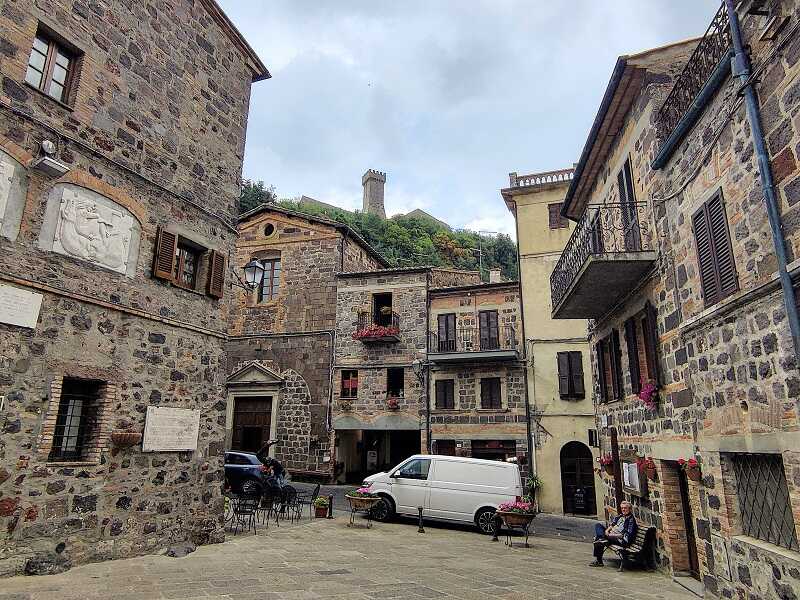