Day 41- from Bourg-St-Pierre to Great St. Bernard Pass: the highest point of the Via Francigena

After weeks spent waiting for this moment, today is the day we arrived at the Great Saint Bernard pass! The occasion was celebrated as a big reunion: a lot of people joined us and we were surprised by the arrival of Massimo and Alessio, two Italian pilgrims which we have met multiple times in France and I have mentioned before in my blog; they are walking the entire Via Francigena, from Calais to Santa Maria di Leuca, without a single break. Vice-presidents Martine and Gaetan, director Luca Bruschi, and Raphael Farquet, all joined us for this stage, among many locals and enthusiastic supporters. What a group!

We knew it was going to rain around 1 pm today, so we started walking at 8 on a good pace. We headed off in the woods, but soon came out of the canopy reaching 2000 m elevation, where trees are unlikely to grow anymore. We came into a stunning panoramic open space. We came by the beautiful artificial lake of Barrage des Toules, a dam with reservoir, and stopped to take pictures. We could feel the chilly air at this elevation, but the sun kept popping out warming us up as we continued. I’ve been thinking how much I miss Italy, and that I can’t wait until Saturday to walk into the country. Italian is one of the languages I feel most comfortable with, whereas I’ve been struggling now and then with my French; also, I could open a whole chapter here about my love for Italian food!

Today we climbed the whole time: we never had a flat or downhill section. Everyone walked with their own pace – which I think is the best way to approach a walking trip – waiting for each other here and there. However, at some point the clouds became denser and darker, and we could tell the rain was coming. We were still missing the last third of today’s stage when big raindrops started pouring down. We all stopped to wear our waterproof gear just in time before proper rain started coming down. The route became steeper and steeper, rain kept pouring, a cold wind blew on our wet clothes and on my legs – I was still wearing my shorts – but the entire group was surprisingly fast and motivated. We started finding patches of snow and we could hear a marmot warning its family about this big bunch of humans invading their spaces. A lot of cows were grazing around us – they get moved at high elevations during summertime to keep fresh. Finally, at some point you can see the Great Saint Bernard Hospice popping out behind a corner, but it’s still quite far up: the last part is quite hard and steep, and we all had to push ourselves a little bit. I chose to run up the last few meters, I just wanted to get there! And here we are. Once we arrived we opened up our Road to Rome banner and walked as a big ensemble under to the rain up to the lake of the pass, where five men were triumphantly playing Alpine horns for our arrival. We made it!!

After taking pictures and enjoying the moment of arrival, we went into the Hospice for shelter and had hot thee while getting our credentials stamped. It was only 1 pm when we arrived, so we had lunch soon after.

I climbed up the Great Saint Bernard pass once before, by bike, coming from the other side, from Aosta. I feel like I really know this place now, and it’s sincerely amazing. Here I am, in the highest point of the Via Francigena. Yet, it’s hard to believe I am not even halfway through my journey. I’ve been on the road for 6 weeks now, but it feels like months and months. I’ve met so many people, seen so many places, and my body is now absolutely used to walk long distances. I could do it again just now, but there is so much more in front of me!

– The feeling of freedom in the mountains

– The alphorn concert at our arrival 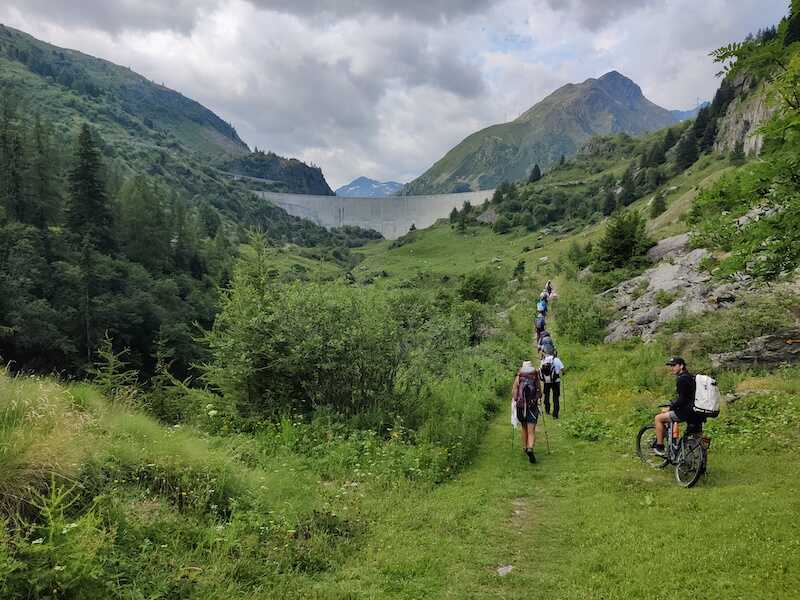 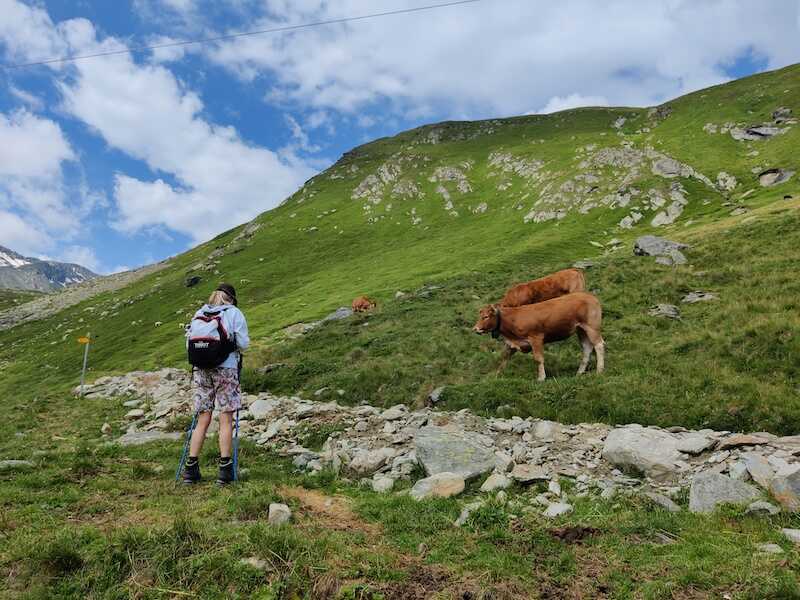 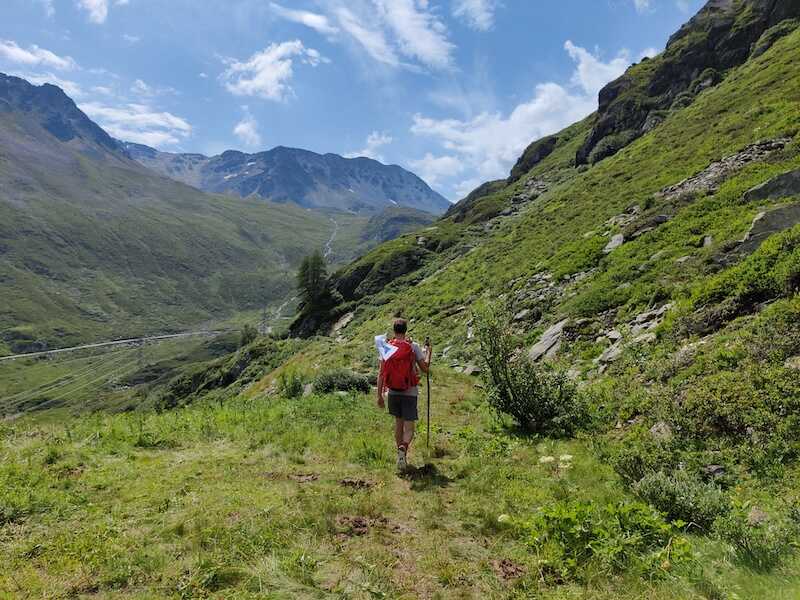 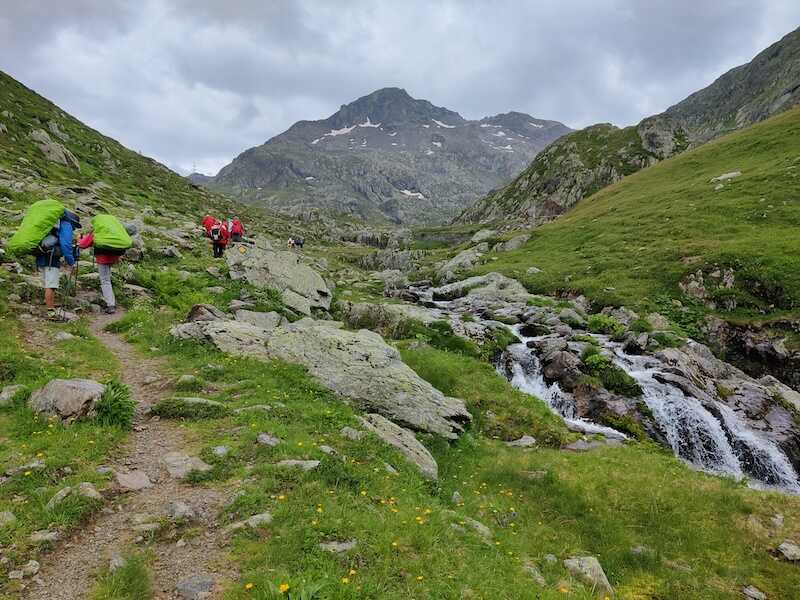 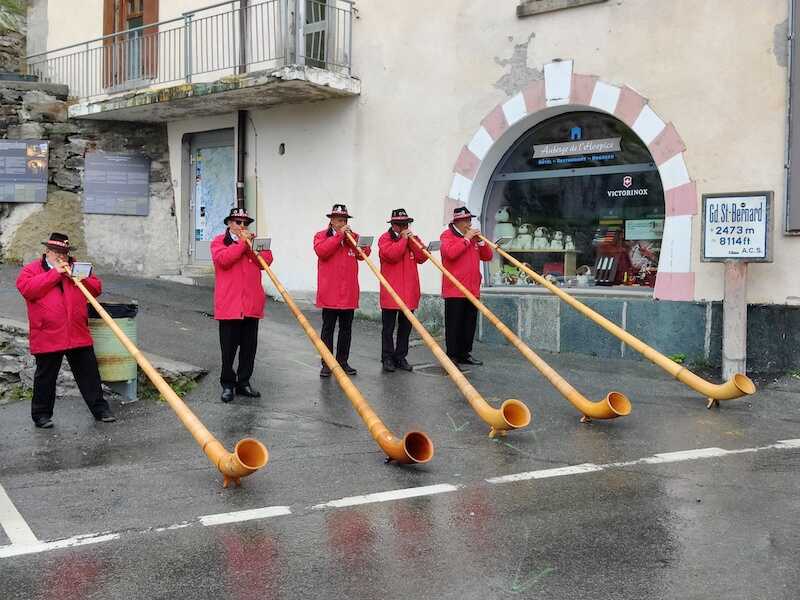