Switzerland is stunning and full of surprises. Despite today’s stage was relatively short, there are so many things to tell you about! Among the group of locals who joined us today was Raphael Farquet, a former Swiss Guard, who already walked the Via from Switzerland to Rome a couple of times. Luca and Arianna, who were supposed to leave, decided to stay for the entire stage, and Arianna enjoyed her trip so much that she decided to join us next weekend for the Great Saint Bernard pass and probably somewhere in Italy in the coming weeks.

So here we are, back on our feet. We walked next to the beautiful castle of Aigle, where we spent some time taking pictures, and very randomly met our friends Simon and Olga from the Netherlands, who we met weeks ago in France and seem to be following our same timetable. It’s great to have these familiar encounters on our way, during a trip where you always expect to see new places and meet new people!

After the castle, our first climb started. We walked into the forest above Aigle, a short but steep hill into the fresh canopy that led us to a gorgeous view over the valley of the Rhône River from which we could see Aigle and Ollon. We walked along the edge of the valley and then started descending into Ollon. While walking into Ollon, we spoke about some local friends of EAVF’s, who are managing the Abbaye de Salaz, an ancient abbey and pilgrimage hospital, today active as an event venue organizing weddings and special celebrations and producing local wine. We decided to give it a shot and walked into the building to see if we could find them. We were incredibly surprised to find them, and they immediately offered us to sit on their terrace for our lunch break and gave us their very own and special white and red wines! The last two stages, both before and after Aigle, we’ve been seeing vineyards along the entire route: beautiful terraced vineyards, like those we found in the area of Lavaux, on Lac Leman.

After our lunch break, we started walking into the valley and along the Rhône River. At this point it started raining again. As usual, we put rain covers over our backpacks and wore our raincoats. We continued walking toward Massongex, a town full of surprises, where the mayor was waiting for us. She stamped our credentials and then started telling us the story of the square we were standing in: ancient Roman baths used to be here! Our walking companion Raphael Farquet was baffled to learn this: “How is this possible? – he said – I live here and had no idea of such an incredible and important story!”. The mayor convinced all of us by showing a well-preserved Roman mosaic we could see from a little window in the square: two Romans fighting in ‘pugilato’ style, on the floor inside the building.

We continued our journey and walked across a narrow passage between Lac Leman and the Alps before arriving in Saint Maurice. Saint Maurice is exactly halfway through Sigeric’s route along the Via Francigena: it means today we are halfway to Rome! But this is not the only important checkpoint for us: Saint Maurice’s Abbey is the longest functioning abbey in the Western world! It has in fact been active for 15 centuries (!!!), without interruptions. Our amazing guide from the local tourism office told us the inspiring story of the city and its abbey, with a few pilgrims joining the (highly recommended) tour. After a 17 km hike, it’s not easy to keep a group of walkers focused, yet we were absolutely mesmerized by our guide and the way he told us such stories and interacted with us!
After the visit we finally reached Hôtellerie Franciscaine, end destination of the day, accommodation and dinner location. Tomorrow we will be walking with the guidance, once again, of the tourism office of Saint Maurice. We can’t wait to hear more stories from them! 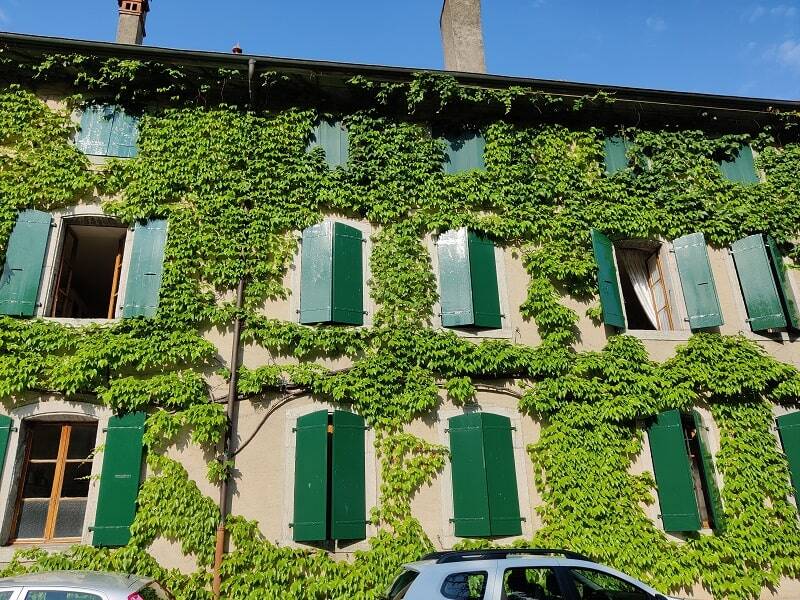 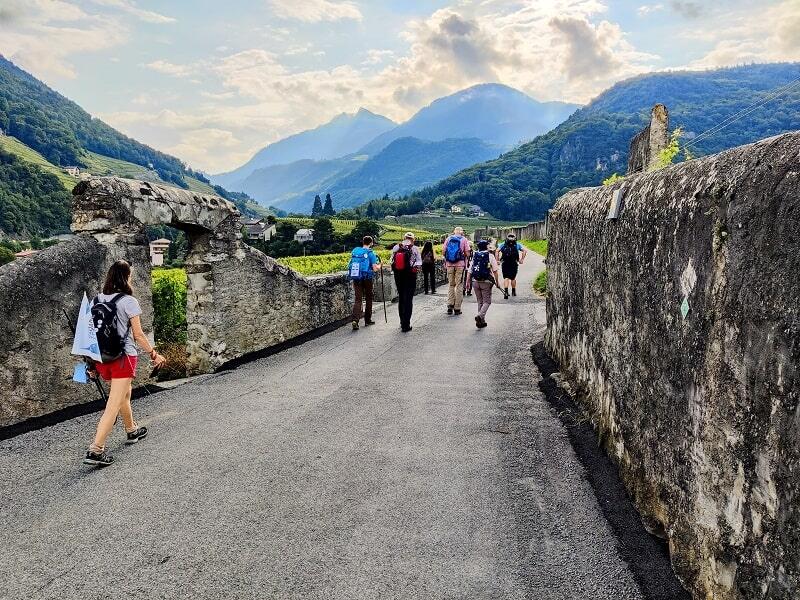 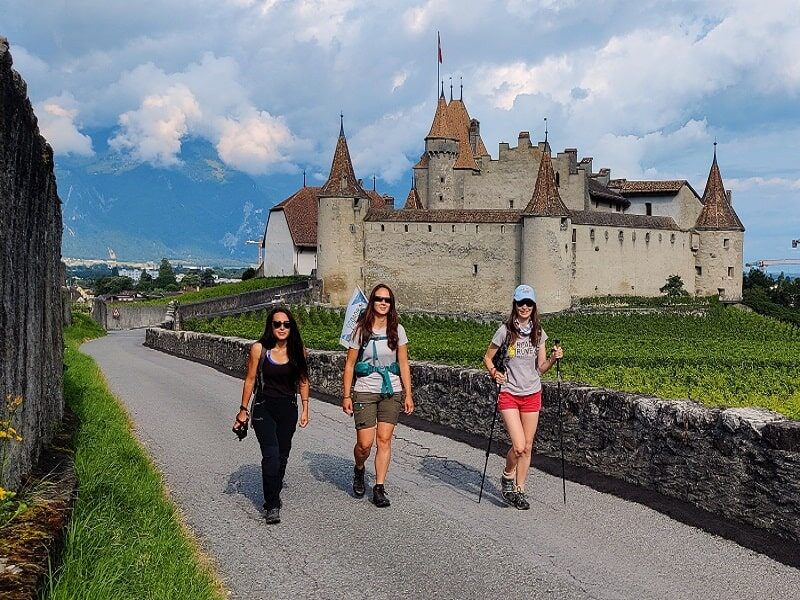 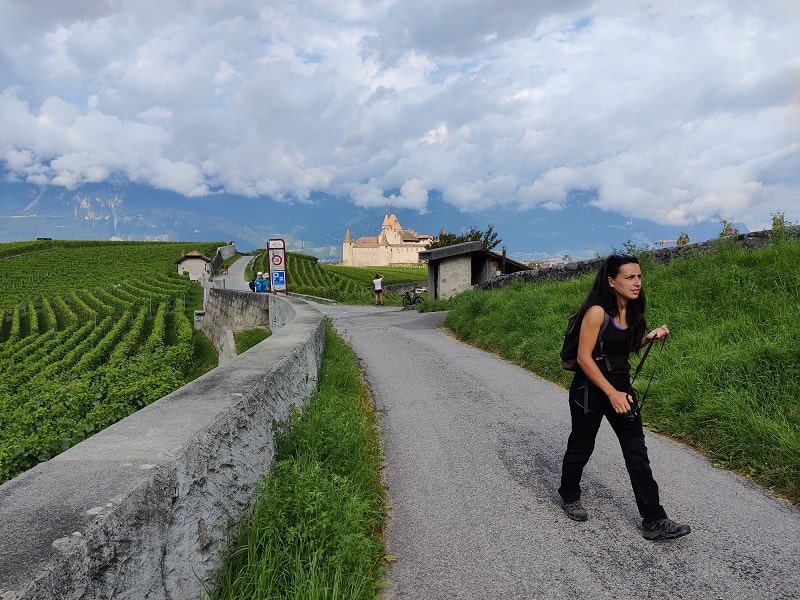 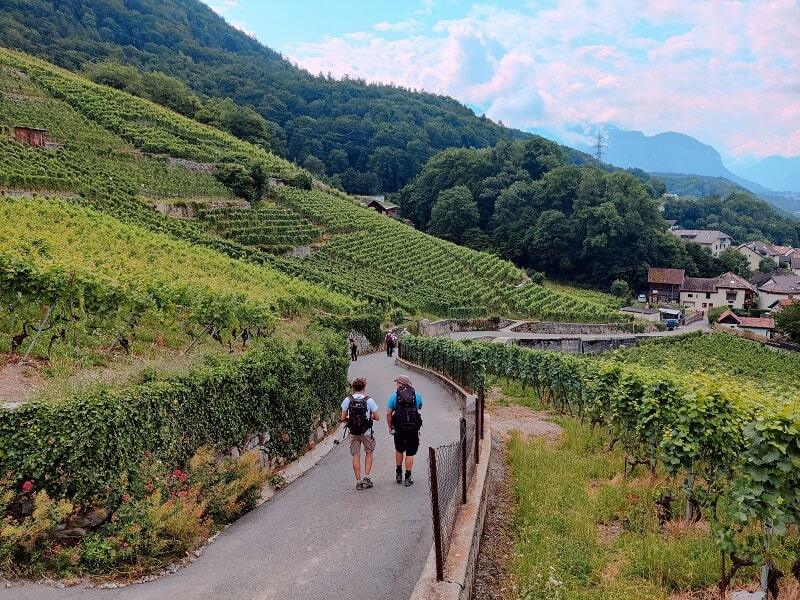 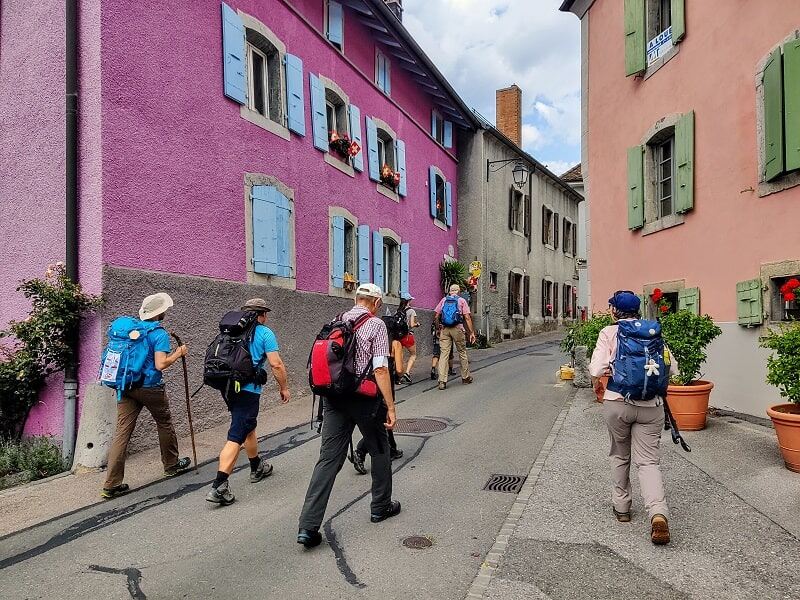 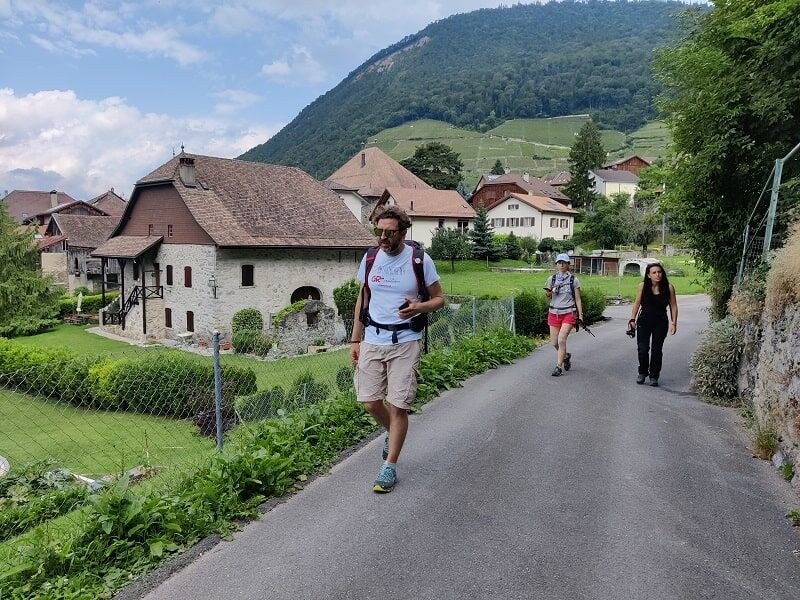 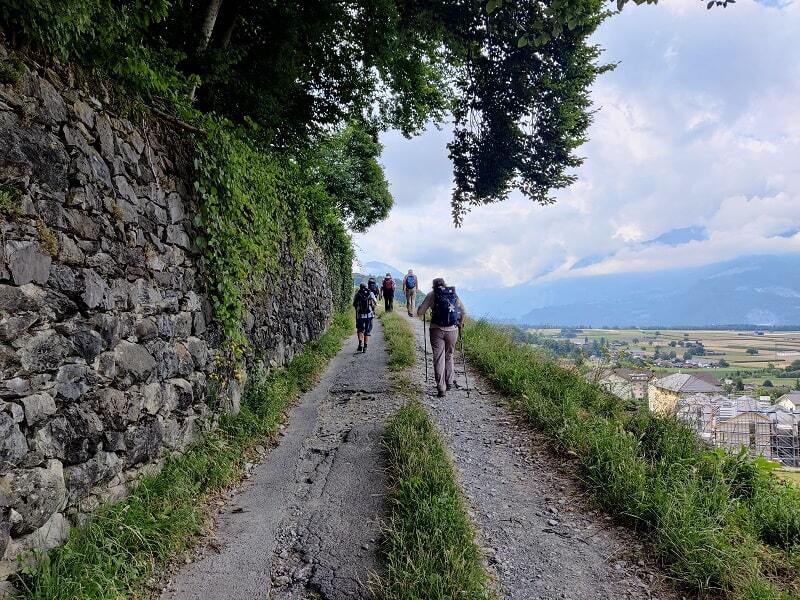 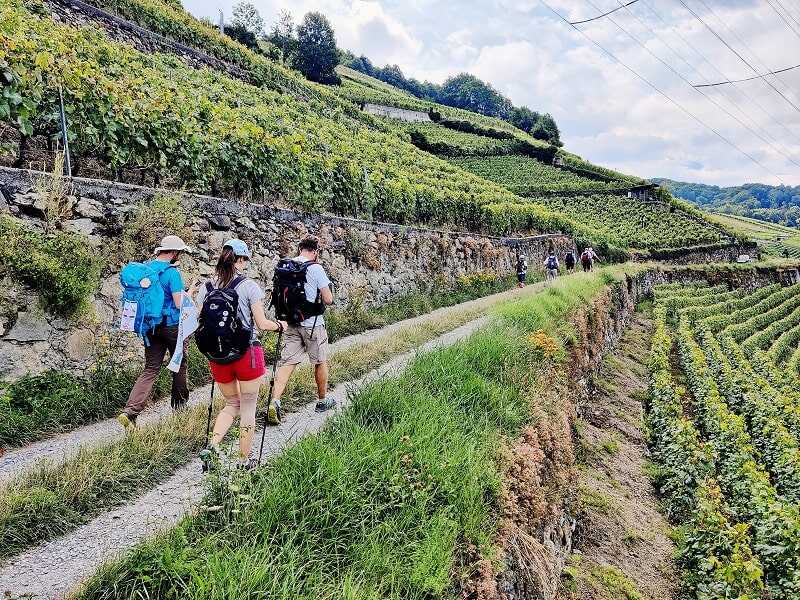 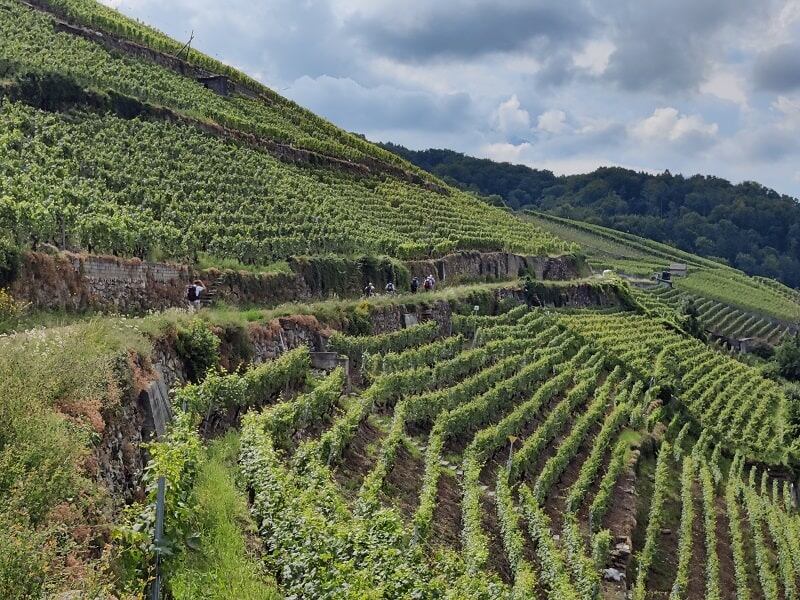 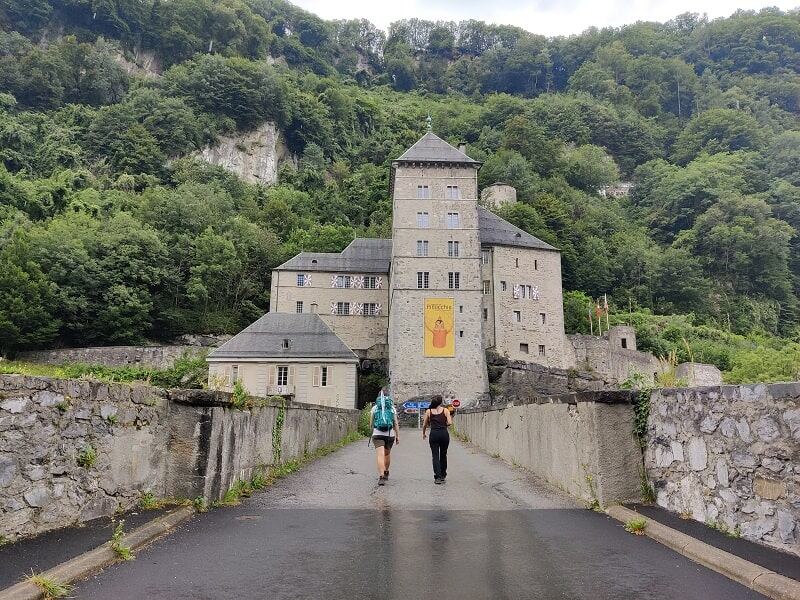 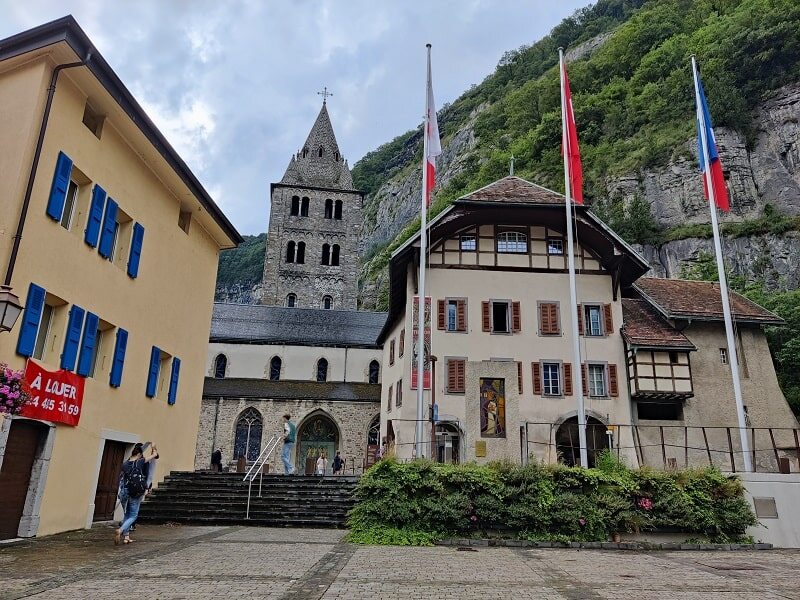 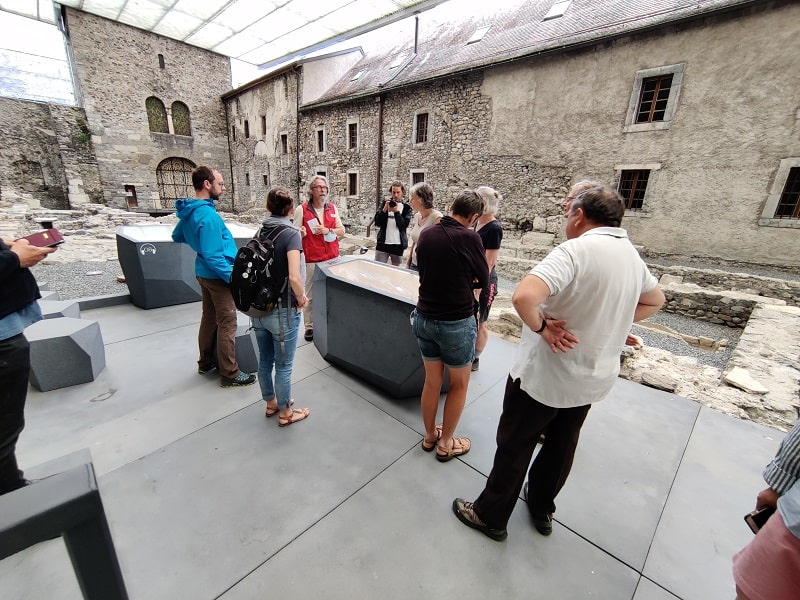