THE GORGES OF SANT’ANDREA

THE GORGES OF SANT’ANDREA

In the Saint Andrea valley there is one of the most attractive and best preserved sections of the Antica Appia along the Southern Via Francigena.

Along its 3 kilometres, at the sides of the Roman road there is a sort of pavement, still visible in tracts. The northern part of the route was terraced with impressive walls built in an open traverse and along the road we can still see what remains of the constructions built as a defence from the brigands and Bourbon road blocks.

About half way along, the road is dominated by the fort of Saint Andrea, built on the ruins of an ancient temple dedicated to Apollo and of which the cisterns also inside the terraces can still be seen today.

The building was constructed in order to fortify the pass, situated in a strategic and delicate position, coinciding with the entrance to the Kingdom of Naples.

Various battles took place in the area, the most famous of which was that of 1799 during which Fra Diavolo prevented Napoleon’s troops from entering the territory of Naples.

In late Antiquity a chapel was built on the ruins of the temple dedicated to Saint Andrew, the Apostle, from which the fort and the valley take their name.

The excellent state of preservation of this section of the ancient Roman road makes this area a veritable open-air museum displaying the road-building technique of the Romans. 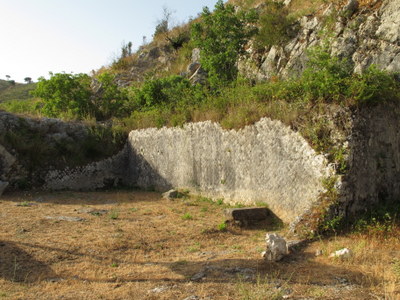