There is a legend that tells the tale of the founding of the Sanctuary of the Madonna del Sorbo. It runs thus: There was a young man of Formello who kept his pigs on the grazing land in the Valley of the Sorbo. One day he noticed a sow run off alone and return and hour later. Having watched the animal repeat this for several days in succession his curiosity was aroused and he decided to follow it.

The sow climbed the hill to the Sorbo tree where it sat on it’s haunches raising it’s forelegs as if in prayer, and gazed fixedly at the icon of the Virgin and Child nailed to the tree. The Madonna spoke to the swine herd telling him to run to Formello and tell of the apparition saying that, should they not believe him, she would perform a miracle. So it was that when no one believed him, the swine herd thrust his mutilated arm into his pocket and drew it out complete with hand. Thus convinced the people of Formello carried out the Virgin’s wish and built a sanctuary at the site of the apparition. They kept the Sorbo tree with the icon of the Madonna that had spoken to the swine herd, as it stood, building the church round it. The new church became a place of pilgrimage.

A more prosaic version of the tale recounts that in the X Century there was a Castle on this spot which had within it’s walls a chapel dedicated to the Madonna. In 1427 Cardinal Giordano Orsini, of the noble family of the Orsini, became Lord of the territory. He conceded the ruins of the castle to an order of Carmelites and allowed them to build a convent with a church to be erected on the site of the ancient church and dedicated to the Virgin. This is the building that we see today. It still serves the faithful and on the alter continues to stand the icon of the Madonna that spoke to the swine herd. The Buildings surrounding the church are all that remain of the Convent. 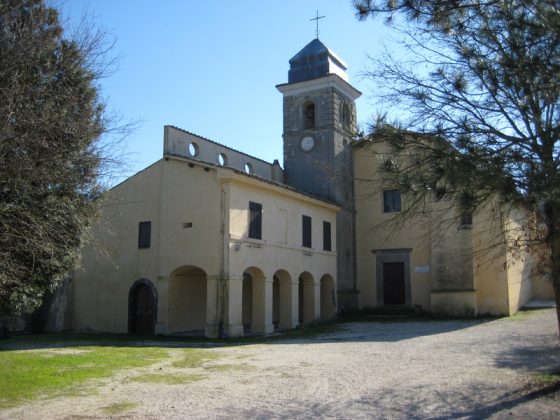