Still don’t feel ready for your bike trip? After reading these tips, you will be able to handle any situation along your trip without any worries!

The Via Francigena cycling route is divided in stages of an average length of  50 kilometres. The splitting of the stages can certainly be modulated according to your training and preparation. Cyclists are also less constrained by the presence of pilgrim accommodations: it is no big deal for a biker to add 5 or 10 kilometres to arrive at a well-equipped and welcoming home!

The route is signposted every 300 to 500 metres with blue-white adhesive bands and/or arrows with the words ‘CicloVia Francigena‘, or, rarely, by the pilgrim symbol surrounded by a bicycle wheel.

The route of the Via Francigena crosses different environments with different climatic characteristics. It goes from the 2,500 m altitude of the Great St Bernard Pass to the plains of the Po valley; from the Apennine Cisa Pass to the Tuscan hills…

In short, the best seasons to cover the entire itinerary are May and June or September and October. The hottest months should be avoided, especially in the Po Valley, where there is very little shade and the climate is sultry. During summer, it is always advisable to protect your head and use sun cream several times a day. It is good to leave very early in the morning, or even at dawn, to avoid the hottest hours.

It should also be kept in mind that the Great St Bernard Pass is generally only open from the beginning of June until the beginning of September because of the snow that makes it impassable for most of the year. The Cisa Pass can also be snowy during late autumn or early spring. 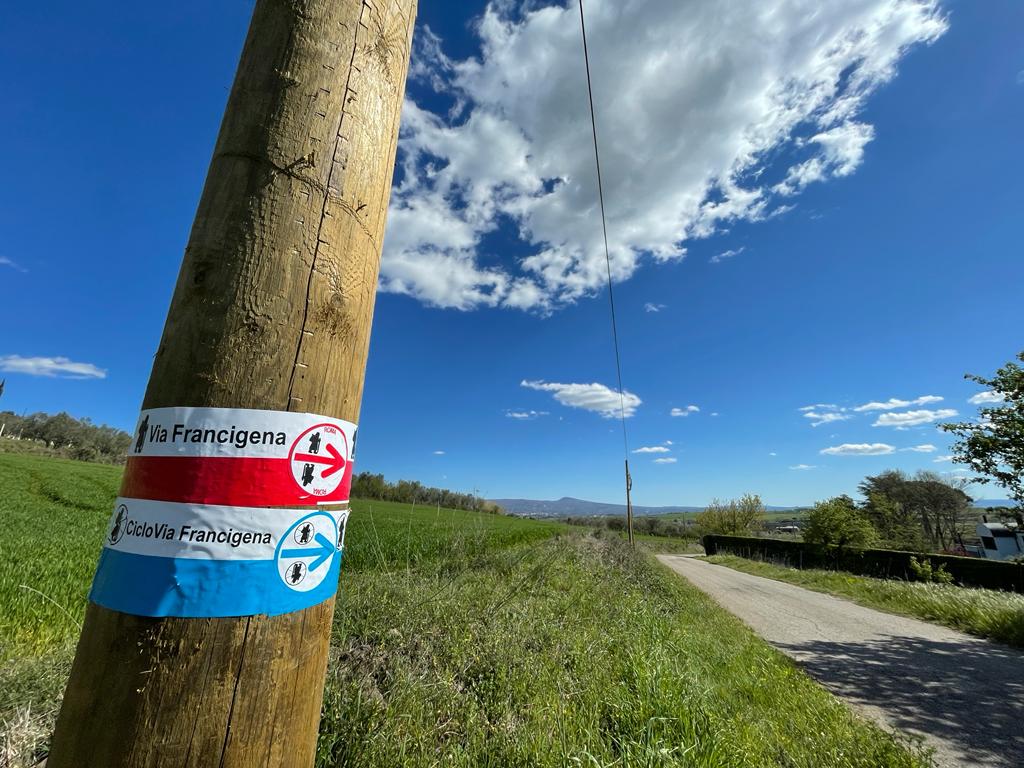 Compared to the pedestrian route, which favours dirt roads, the bicycle route includes numerous paved secondary roads with little traffic, and avoids rough dirt roads as much as possible. The route is about 70% on asphalt and the dirt sections are mostly on ‘gravel roads’ with a stable surface. When there are no alternatives, short sections of traffic roads are used.

The route is therefore suitable for adult cycling travellers with a good control of the vehicle, good training and travel experience. The asphalt roads, on which cars also pass, are not recommended for families with children or untrained people.

We also point out that the Great St. Bernard Pass, both on the Swiss and Italian sides, the Apennine Cisa pass, and above all the continuous ups and downs in Tuscany and Lazio, are quite demanding and require good training. The section in Campania is also demanding in the inland passage. On the other hand, the English and French sections of the route are suitable for everyone, as they are mainly flat, similarly to the Italian sections in Piedmont, Lombardy and Emilia-Romagna up to Fornovo, and along the Via Francigena in the south for the section in southern Lazio and Puglia. 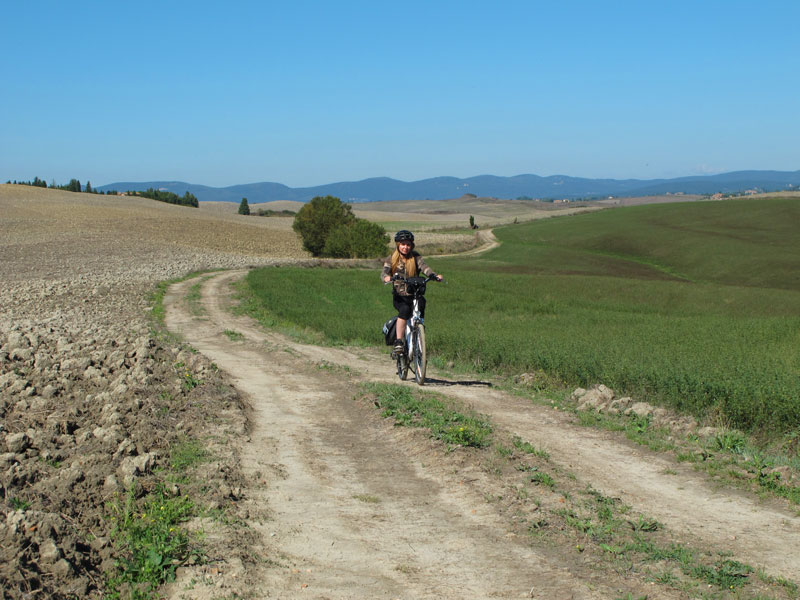 Water, refreshment points and accommodation along the route

Water fountains and refreshment points on some stages are frequent, on others rather rare or even absent. The availability of water must be carefully assessed and taken into account by always filling water bottles when possible. During an average stage in the middle of summer, we recommend drinking at least two litres of water, possibly supplemented with mineral salts, to reduce the risk of heatstrokes.

But fear not! Most of the towns crossed by the Via Francigena have bars or shops selling food and drinks. Their presence is indicated in the description of each stage.

Pilgrim accommodation facilities generally give priority to the cyclists who present the pilgrim’s credential. It is therefore advisable to buy the credential before setting off, and make sure there is availability of space at the accommodation, for example by booking the day before arrival, and to ask about the presence on site of a safe place to park the bicycle for the night.

Due to the characteristics of the route, we recommend the use of a hybrid bike or a mountain bike, equipped with lighting and reflectors, as prescribed by traffic codes.

Two rear panniers and a handlebar case are sufficient for your luggage, as no tent, cooking equipment or sleeping bag are required. It is important to have padded shorts for the saddle, sportive T-shirts, a bike windbreaker with reflective bands and a change of clothes for the evenings. And don’t forget to be prepared for replacing and repairing the bike’s inner tube in case of a puncture! 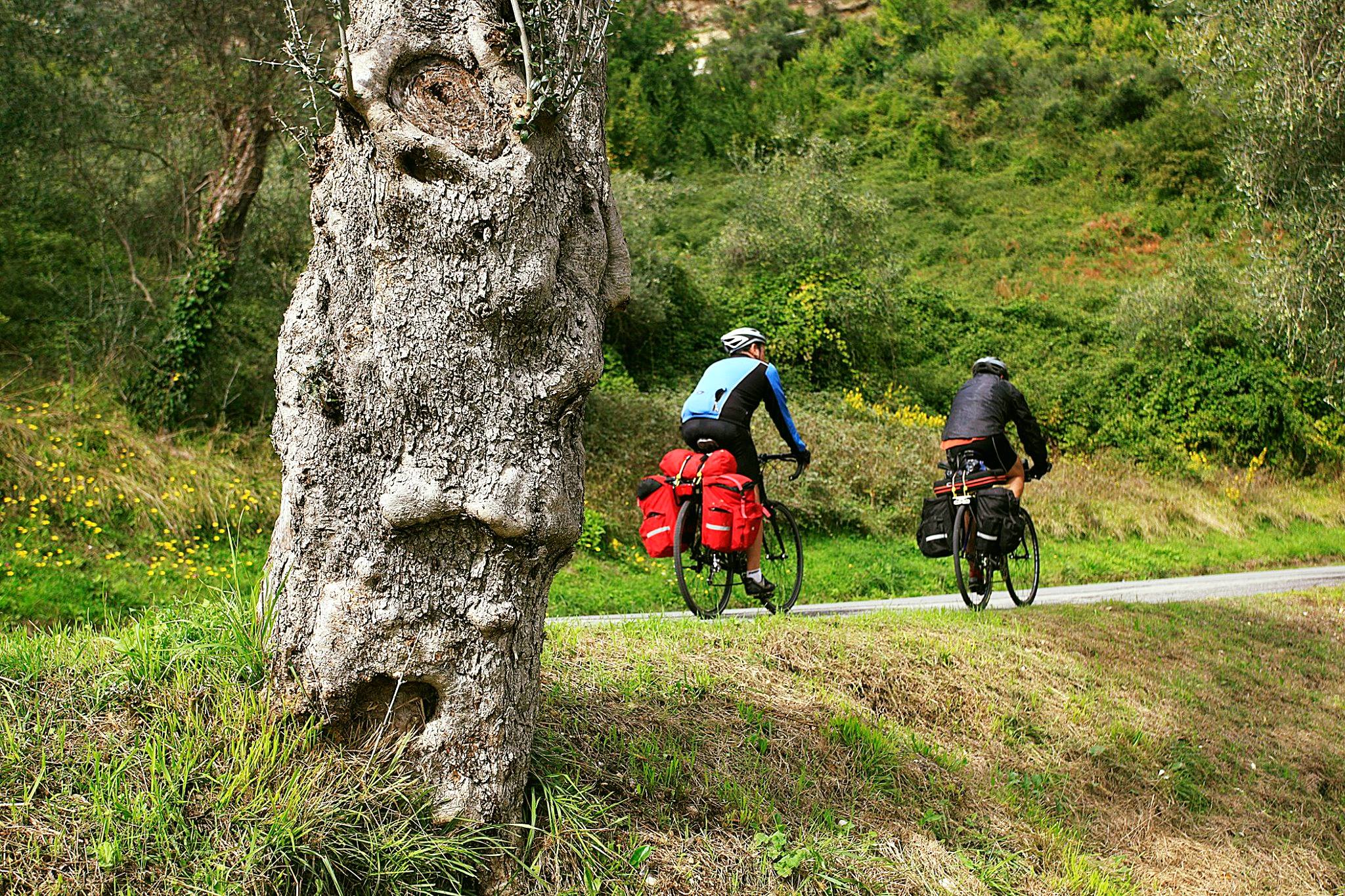 Smartphones and tablets are now multifunctional devices that allow you to view your position on maps via GPS, read the route guide, a novel at the hostel in the evening, take photos and videos, read mail, surf the Internet and call home, but also watch TV, read the newspaper, listen to music… all within a few grams of weight on the bike! 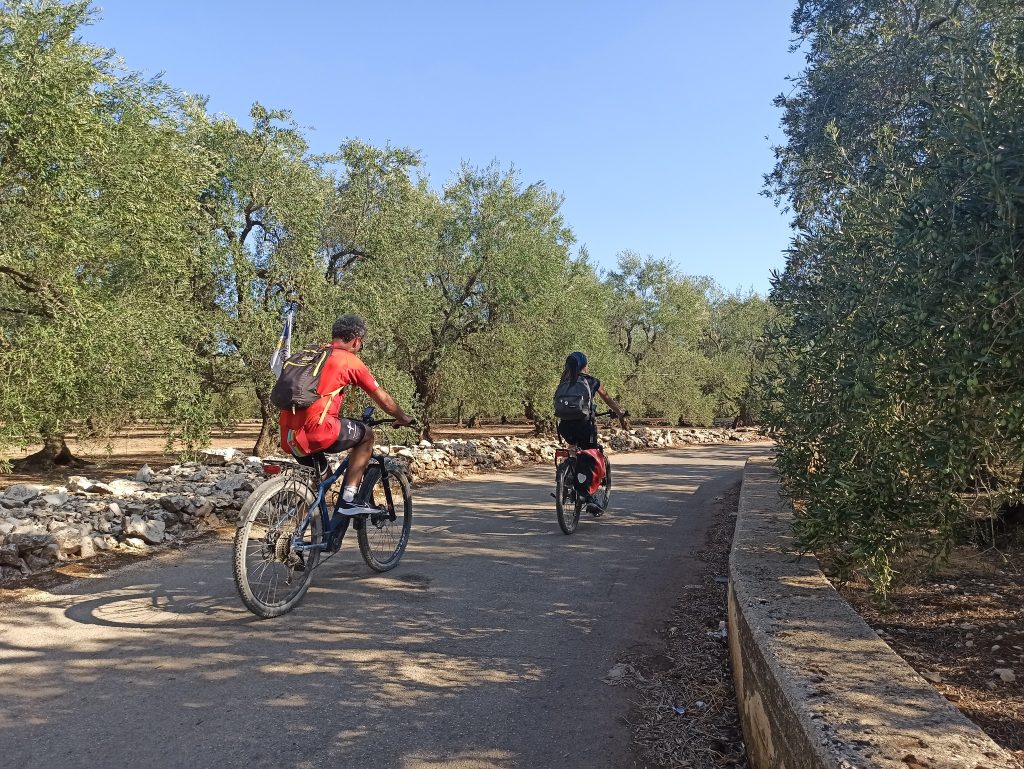