During Early Middle Ages, around the 7th century, the Lombards competed with the Byzantines for the Italian territory. The strategic necessity to connect the Reign of Pavia and the southern dukedoms with a sufficiently safe road, led to the selection of an itinerary before that considered minor, that crossed the Apennines near the present Cisa Pass and that, after Valle del Magra, moved away from the coast towards Lucca. From there, in order not to get too close to the Byzantine areas, the path moved on through Elsa Valley towards Siena. Then, crossing the valleys of Arbia and Orcia, it reached Val di Paglia and the territory of Lazio, where it connected to the ancient Via Cassia that led to Rome. The path was named from the ancient name of the Cisa Pass (Mons Langobardorum) “Via di Monte Bardone”  and it wasn’t actually a road as intended by the Romans, let alone in the modern sense of the word. As a matter of fact, after the fall of the Roman Empire, the ancient consular segments were abandoned and, save a few lucky cases, went to ruin, “rupte”. So much so that, in that period, originated the use of the Italian word “rotta” (literal “broken”) to describe the direction to take.

The Roman cobblestones gradually left space to paths, tracks, well trodden trails, beaten by the footsteps of wayfarers that generally spread on the territory to then converge at the mansions (residential and welcoming centres, where it was possible to find accommodation for the night), or at some obligated passages, such as crossing places or fording. They were more like “road areas” than real streets, whose path used to vary for natural causes (overflowing, landslides), for alterations of territorial boundaries crossed by it and the following request for duties, or for the presence of bandits. The road was paved only in the segments that crossed the cities, whereas in the connecting sections prevailed the well trodden trail.
It is therefore clear that the reconstruction of the “real” track of the Via Francigena would be today an impossible challenge, because it never existed: it is however reasonable to track back the main mansions and places visited by the wayfarers along the Via. 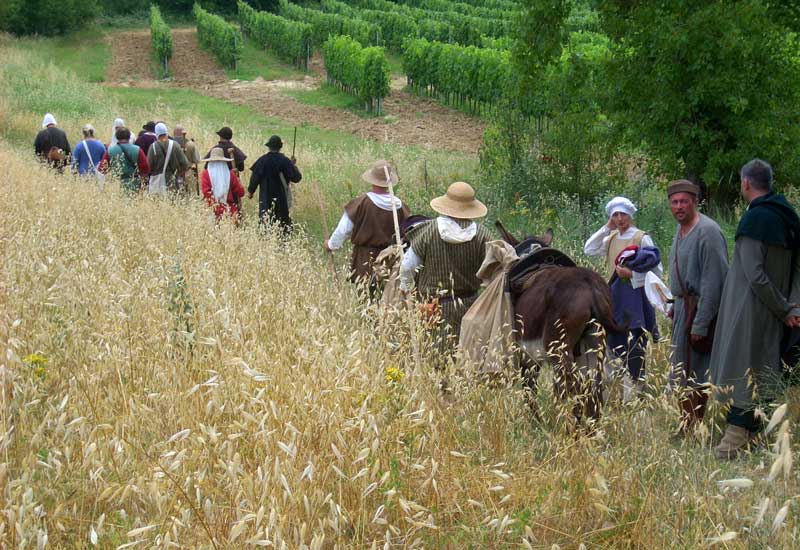 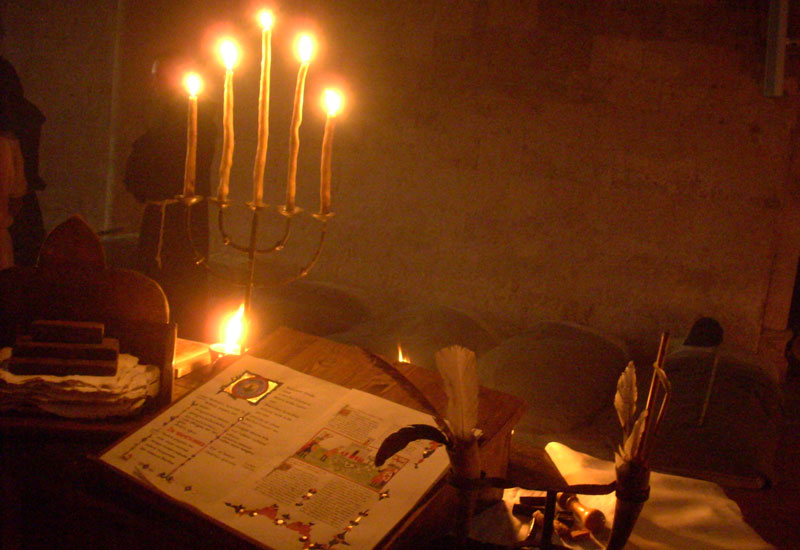 The birth of the Via Francigena

When the Lombard domination left space to the Franks one, also the Via di Monte Bardone changed its name into Via Francigena, that is to say “road that originates from France”. The name included, beyond the current French territory, also the area of the the Rhine valley and the Netherlands.
At that time, the traffic along the Via was growing, so that the path established itself as the main connection axis between the North and the South of Europe, along which merchants, armies and pilgrims passed through.

Pilgrimages over the course of history

Between the end of the first millennium and the beginning of the second, the practice of pilgrimage acquired a growing importance. The holy places of Christianity were Jerusalem, Santiago de Compostela and Rome, and the Via Francigena represented the central junction of the great faith roads. As a matter of fact, pilgrims coming from North travelled on the Via towards Rome and eventually along the Appian Way towards the bridges of Puglia, where they could embark for the Holy Land. Vice versa, Italian pilgrims that were headed towards Santiago, travelled on the Via towards North, to reach Luni, where they could embark for the bridges of France or they could continue towards Moncenisio and then to the Via Tolosana, that led to Spain. Pilgrimage soon became a mass phenomenon and this intensified the role of the Via Francigena, that became a determinant communication channel for the realisation of cultural unity, that characterised Europe during the Middle Ages. 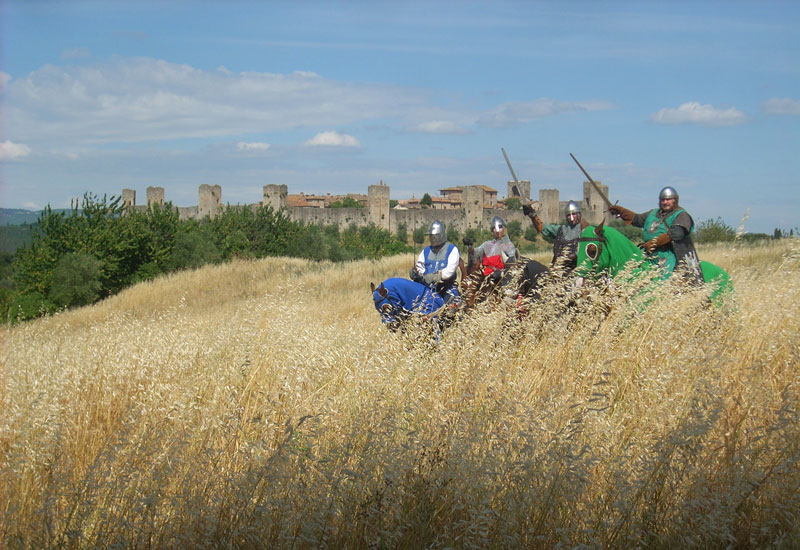 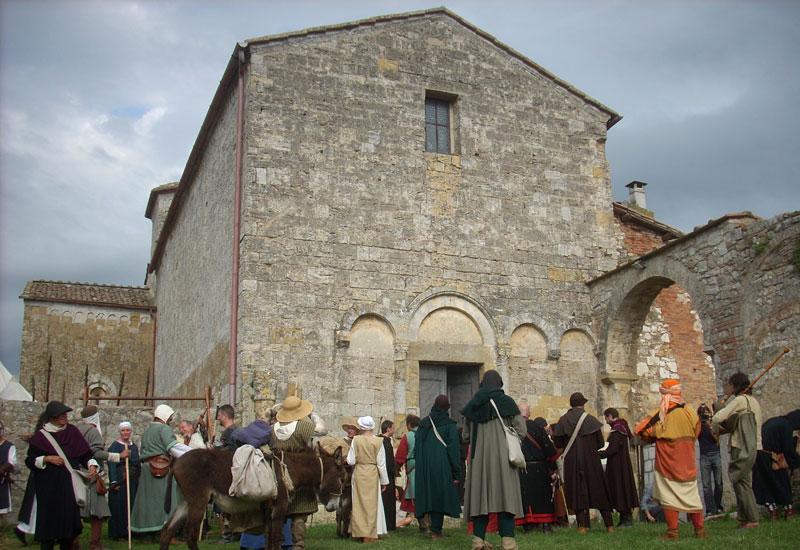 It is mainly thanks to the travel journals, and in particular the notes of the illustrious pilgrim Sigeric, that we can nowadays reconstruct the ancient path of the Francigena. In 990, after being ordained as Archbishop of Canterbury by Pope John XV, the abbot went back home noting on two manuscript pages the 80 mansions where he stopped for the night. Sigeric’s journal is still considered the most authoritative source, so much so that often we talk about “Via Francigena according to Sigeric’s itinerary”, in order to define a more “philological” version of the path.

The growing use of the Francigena as a commerce road led to an extraordinary development of many centres along the path.

The Via became strategic for the transport of wares coming from the East (silk and spices) towards the North of Europe and for their exchange, usually at the fairs of Champagne, with damask linen from Flanders and Brabant. In the 13th century the commercial traffic grew so much, that various alternative ways developed from the Via Francigena, so that it lost its distinctiveness and it fractioned in different connection itineraries between the North and Rome.

So much so that the name changed into Romea, highlighting that it wasn’t the only origin anymore, but the destination. Moreover, the growing importance of Florence and of the centres of the Arno Valley moved the paths towards the East, until the trajectory Bologna-Florence isolated the Cisa Pass to a merely local function, proclaiming the end of the ancient path.

A new focus on the Via Francigena has come about in recent times as a result of the rediscovery, which occurred in the Seventies of the twentieth century and consecrated from the Eighties, of the Way of Saint James. This experience resulted in an increased awareness of the presence of an ancient European pilgrimage route, still largely recognizable despite the changes over time.

In view of the Jubilee of the year 2000, many studies, publications and research papers and dedicated projects found new impetus, including the one, managed by the Italian Ministry of Tourism in 1993 in collaboration with the Italian regions and local councils, approved by the European Commission – DG XXII – as part of the EU Action Plan, led to the recognition of the Via as a “Cultural Route of the Council of Europe” in 1994.


In the year 990, archbishop Sigeric travelled between Rome and Canterbury, describing the 79 stages of his itinerary in his journal.
Read more

The Via Francigena in Southern Italy

The pilgrims had only one destination: the "pasagiumultramarinum", the land and sea route that led to the Holy Land.
Read more


In this section it is possible to find the main texts that retrace the history of the Via Francigena.