District 108L Lions Club International is at the front line when it come to promoting peace, and the Via Francigena as Cultural Route of the Council of Europe represents the values of peace, respect, dialogue, democracy, and inclusion.

In District 108L (Umbria, Lazio, and Sardinia) the Via Francigena officially crosses through territories located within the region of Lazio and, in this regard, the district lions officer Sara Fresi has created a historical document entitled “Territories of Lazio crossed by the Via Francigena”. This document is a useful contribution for all those who wish to travel the Via Francigena and discover its picturesque landscapes and historical, cultural, monumental beauties. Following is the incipit of the document:

Territories of Lazio crossed by the Via Francigena, by Sara Fresi

In the 7th century the Longobards penetrated the Italian territory, occupying part of the peninsula at that time disputed with the Byzantines. They wanted to connect the Kingdom of Pavia with the southern duchies by means of a safe road across the Apennines, passing through the Cisa Pass: its name in ancient times was Mons Langobardorum, later called Via di Monte Bardone. It was basically a group of roads connected by consular and dirt roads. When the Franks took over in the Carolingian era, the Via di Monte Bardone changed its name to Via Francigena, or “road originating from France”.

Traffic along this route increased and, over the centuries, the road established itself as the main route linking northern and southern Europe, used by masses of pilgrims as well as merchants and armies. It also connected the three ‘Peregrinationes Maiores‘: Santiago de Compostela, the tomb of the Apostle Peter and the Holy Land. The European Network of the Vie Francigene is a legacy linking the present day to the cultural identities of the old continent.

The whole document (in Italian) can be consulted by clicking here. 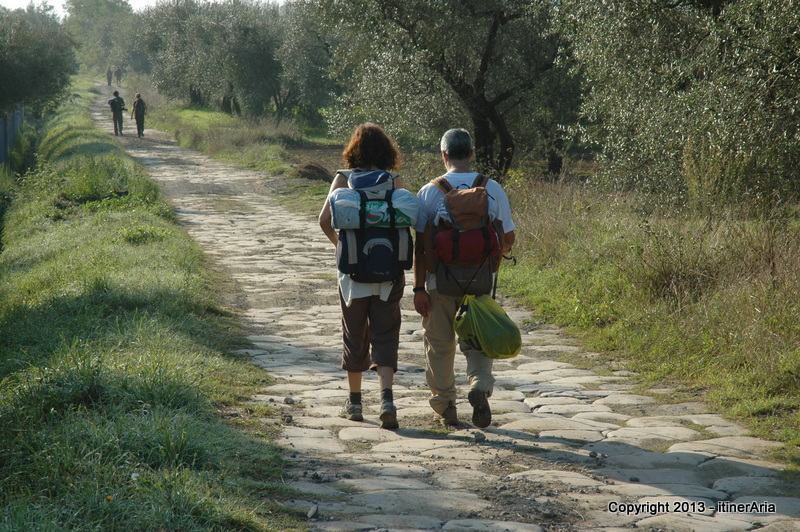 PrevThe municipality of Saint Maurice (CH) becomes an EAVF member!
Calais: a rose breed dedicated to the Via FrancigenaNext