The “Via Francigena – Road to Rome. Start again!” relay march, organized by the European Association of Via Francigena Ways with the support of ENIT, on August 1st reaches an important checkpoint.

END_OF_DOCUMENT_TOKEN_TO_BE_REPLACED

On the 31st of July, on the historical Cisa pass in the municipality of Berceto, the first TWIN Cabin will be inaugurated. The accommodation structure will open to ‘slow’ tourists, traveling by foot or by bike along the Sentiero Italia CAI and the Via Francigena.

END_OF_DOCUMENT_TOKEN_TO_BE_REPLACED

Written by Sabine Rostaing, in collaboration with her husband Nicolas and her son Matthias, who is a playwright, “The legend of Sigeric: the true story of the Via Francigena” puts together historical events and the stages of Sigeric’s Journey, the archbishop of Canterbury who set the basis (without knowing it!) of our Via Francigena. 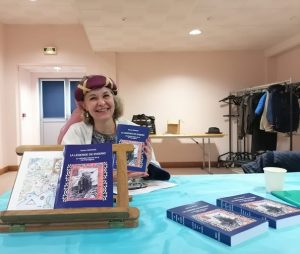 The book, created in the style of a conte théâtrale, traces the story of this man in a semi-serious and engaging manner.

Lightly written, it leads us into the beauty of a trip across time. The text is supported by a glossary, helping us to interpret the language.

Through the official website, you can access more information and other contents for free, as well as podcasts and some extracts of the book’s text.

Extracts from the book: https://sygericfrancigena.com/extraits/

You can contact Sabine Rostaing to get a copy of the book: https://sygericfrancigena.com/contact

What is a pilgrimage for you? We wonder how many people ask themselves this question when they are about to start their journey.

Not just any journey – let it be clear – but a type of journey in which luggage must be minimized and carried over the shoulders, a journey in which the only means to move in time and space are our own legs. Starting a pilgrimage can be a challenge of our own or a way to find peace with ourselves. It can be a physical challenge, but also a moment for self-reflection, a point of departure and a new beginning. Walking may express the need to find yourself for some and the need to lose yourself for others: some travel to do sports, some for religious pursue, some to meet people, some to be alone, for cultural interest, to take pictures, to seek artistic inspiration, or to find contact with nature.

Undoubtedly, some pilgrims asked themselves these questions, travelling with a very precise reason once they found their answer. It is the case for Roy Bella, who, at the only age of 5, is walking the 1000 km of the Via Francigena which connect the Great Saint Bernard pass to Rome: 44 stages, with an average of 23 km covered per day. She is walking as an ambassador of @Pedibus Ticino, a project by the association for traffic and environment @Ata, which aims to sensitize children of all ages to go to school by foot or by bike. A ‘walking bus’ was born in Switzerland around 20 years ago to accompany students under the supervision of an adult, but also to teach, at an early age, the importance of the environment and the impact of economic and ecological choices.

‘Why go on the usual holiday?’ is the question that 3 seventeen years-old friends instead asked themselves before departure. At the end of their difficult academic year, hindered by many restrictions and by digital homebased classes, they preferred a walking trip over the classic leisure summer holiday. Their ages sum up to 50: Tommaso Saladino Medici, Ravi Fabrini and Manuel Mazzarini, having finished high school, left from Ivrea to reach Rome with an average pace of 23 km per day, “with the purest will to know, experiment, explore and challenge themselves”, as their parents commented in an interview at @Tuscia Web.

Not only young people decide to start walking, leaving behind affections and comforts: Giuliana Baldinucci walked the section between Gubbio and Rome on her own at the age of 73, with a very specific intention: gathering funds for the @”Libera…mente donna” association, which manages anti-violence centers in Perugia and Terni. “I used to see many pilgrims, and at some point, I asked myself ‘why shouldn’t I do this?’”, she shared. The answer was clear after speaking with the vice-Mayor of the Municipality of Gubbio, who connected her to this initiative – that she already knew thanks to her long-lasting commitment to support equality. Giuliana’s pilgrimage ended in the @Casa Internazionale delle Donne in Rome, where she was welcomed by the president of the cooperative @BeFree who manages and develops homes and centers for violence victims and refugees across the region of Lazio. Each of us can choose the San Pietro Square that they prefer, based on a very personal mission.

The reason behind the pilgrimage of Francigena Trail participants is, on the other hand, the desire to cycle and discover the Via Francigena in Lazio on two wheels, and especially the need to significantly support @Parent Project aps, an association of patients and parents with kids affected by muscular dystrophy of Duchenne and Becker, committed to the fight of these rare degenerative pathologies since 1996. This solidarity project is expected to begin on the 3rd of September, when bikers joining from all over Italy will travel 300 km on white trails and across the hills and villages of Tuscia. In September, Claudio Stucchi will also depart. Aged 64, he is preparing to travel the entire Italian section of Via Francigena, from Gran San Bernardo to Santa Maria di Leuca. The reason? Support and spread the message of the @Vivere Aiutando a Vivere association from Brianza, which has been assisting terminally ill people and their families for almost 30 years. Colognese Alberto Turra is about to depart on horse to start a 450 km tour with a very precise motive: supporting scientific research to fight pancreatic cancer, in favor of Fondazione Nadia Valsecchi, which has always been merging sports and research. Last but not least, Parkinsonauti is a group of cyclists within the association Parkinson & Sport who biked from Pavia to Rome with the objective of sensitizing people about this disease and witness the effectiveness of movement and sports in slowing down the symptoms.

As Bruce Chatwin would say, life is a journey by foot. If we know what questions to ask ourselves, it will taste better.